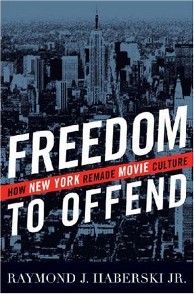 The Paris Theater, on 58th Street in Manhattan, once received bomb threats for showing Roberto Rossellini’s “Il Miracolo” (“The Miracle”) from L’Amore (1948); it is now another stop on the Sex and the City tour. The New Bowery Theater, on St Mark’s Place, once screened Jack Smith’s Flaming Creatures (1963) to an audience that included undercover cops sent to evaluate the picture; it now houses the vintage punk fashion store Trash and Vaudeville. The fate of these two cinemas traces Manhattan’s recent trajectory – from vivid to relived – in miniature. Raymond Haberski, in Freedom to Offend: How New York Remade Movie Culture, advances an account of a different Manhattan shift, one that took place from the 1950s to the ’70s: from censorial metropolis to America’s arbiter of tastelessness.

Freedom to Offend begins with the Legion of Decency on the wane. Once, they were able to command vigorous boycotts by decree: “Because of your interest in the moral health of our nation, especially our American youth, permit me to inform you that the National League of Decency today condemned” … (quoted in Haberski, p. 78). By the 1950s, the League is undone by internecine debate, comprehensively giving up the ghost following its overbearing attack on Baby Doll (Elia Kazan, 1956), and leaving the role of censor for the rest of the century to the local government. They, in turn, fumble the baton in reliably inelegant ways: sending plainclothesmen to evaluate certain risqué pictures while off-duty cops attend others for kicks; (time and again) arresting blameless theater staff; and goading the press with philistine rulings.

Against the censors are pitted the programmers (not, as today, the filmmakers), who steadily question the legitimacy of the law: Amos Vogel and Cinema 16, Daniel Talbot and New Yorker Films, Jonas Mekas and his various enterprises (1). Among them they introduce the public to increasingly frank and, for the time, titillating films. Film critics lose their jobs, theatres are shuttered, and barbs are fired; it’s a tumultuous time for cinema in New York.

Up to this point, Haberski is on stable ground, providing summary of undisputed history, making good use of archival material, and being generous to the players involved. Then, a few controversial films – Flaming Creatures, Chelsea Girls (Paul Morrissey and Andy Warhol, 1966), Jag är nyfiken – gul (I Am Curious – Yellow, Vilgot Sjöman, 1967), and Deep Throat (Gerard Damiano, 1972) – none of which Haberski finds worthy, generate an argument that he appears surprised to be making, one that transforms his book, originally titled “The Heroic Age of Moviegoing”, into the text the published title timidly reflects. It’s an apologia for the censors.

Flaming Creatures, which looks chaste on today’s screens, is quickly deemed a mediocrity, and Jonas Mekas’ championing of the picture (more than Jack Smith’s making of it) prompts a first glance at Haberski the Moralist. Following Parker Tyler, who made a public attack on Mekas in Underground Film (2), Haberski accuses Mekas of egotism and recklessness, and of lowering cultural standards for the sake of controversy. Even if some of Haberski’s polemic is accurate, it is nonetheless scattershot; and he evidently felt some ambivalence over his portrayal, listing Mekas first in the acknowledgements along with the terrific understatement, “my argument might seem critical of some of the decisions Mekas made during the mid-1960s” (p. ix).

While it is easy to disagree with Haberski, as a film scholar his conservatism is rare, and so, refreshing; especially as, barring the odd misplaced fact, he is a careful historian. It is only a pity that he did not drop his occasional pretence of fence-sitting, of a “delicate ironic stance” (p. 1) vis-à-vis censorship and its boundaries. He may have found his bowdlerising bugbear only halfway through the book, reluctantly changed the name of his project, and neglected to make the whole cohere, but he is clearly with the League on this one.