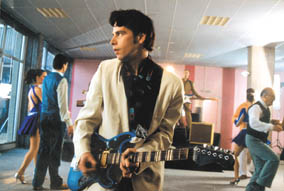 Most of the films I saw at this year’s Greek Film Festival were comedies. This does not reflect the range of films that were on offer – just what I was in the mood to see at the time of the Festival.

My favourite was Black Milk (Nicholas Triandafylidis, 1999). I loved the energy of this outrageous satire on TV, celebrity, the literary world and selling your soul as an artist. It’s not surprising that this film was made by the son of one of Greece’s most outrageous, but also most liked satirists, Hary Klin. Black Milk contains elements which are reminiscent of both Klin’s films and spoken word recordings including an iconoclastic attitude to just about everything, but especially the establishment, and surreal, almost stream-of-consciousness narratives. Triantafylidis carries on his father’s tradition and updates it with the latest look and sounds, adding a sophistication to the production values that Klin’s work lacked but that do not make Triantafylidis’s work overly glossy.

The first half of Black Milk, which features the serial Alekos (Mikhail Marmarinos) works on as a writer, is surreal in both narrative and visual terms. The surrealism of the story-within-the-story is genuinely fascinating (and funny) and the vibrant colours serve to enhance this. The overall narrative is a bit wonky in places (some things just don’t add up when I reflect on the film), but this is forgivable because Black Milk is so out there, exuberant and inventive. The acting is good, particularly Ieroklis Michailidis as the slimy, ruthless “publisher” Poupalos. His exaggerated (but frighteningly real) characterisation stands out. Also good are Takis Spyridakis as the even slimier TV exec who stole Aleko’s girl and Christos Stergioglou as Poupalos’s smarmy sidekick. There are a few too many scenes of gratuitous sex and female flesh, but these are minor quibbles with a film made from a truly unique perspective. I can’t wait to see Triantafylidis’s next film.

There’s loads of gratuitous female nudity in another satire, Female Company (Nikos Perakis, 1999). This time it’s about the double lives of the female “pillars of society” in a Greek town, a group of friends who are fed up with the men in their lives having their way. The women set up a company of sorts when they do up an apartment as their own secret space. Unbeknownst to them and their men, their exploits are televised on the net as part of a blackmail scheme. It’s great to see women as the focus of a film, expressing and largely fulfilling their desires. But this is undermined by the fact that most of the women “pay” the price, while their philandering men get off scot-free. The energy and pace are handled well and there are some funny lines, but Perakis runs out of places to go with the narrative and some funny lines do not a whole film make. And there are too many characters and entanglements to keep track of at this kind of pace. We’ve seen this kind of irreverent romp before in Greek cinema and done much better (eg. Safe Sex [Papathanasiou, 1999]). One of the more positive aspects of the film (and positive for the genre) is that the director exercises a degree of self-restraint in a film about sexual manners by not showing sex scenes. Rather he incorporates a lot of talk about sex, which I think is far sexier. The only sex scenes Perakis does include are at the end and are presented in a comical way in an attempt to show how silly we can become when sex is involved.

Risotto (Olga Malea, 2000) covers similar themes – women and their relationships with men – but is a smoother, almost slick take on the subject. Risotto homes in on the juggling act that is the lives of many women of the late twentieth and early twenty-first century. Malea, who made The Cow’s Orgasm (1997) and The Mating Game (1999) both of which deal with women’s concerns, is questioning whether women in general have really made progress since they achieved the right to work outside the home and subsequent economic independence and sexual “liberation”. Risotto has Eugenia and Vicky, two colleagues who work on a magazine as photographer and stylist, becoming allies in the war against their respective (male) partners. They move in together in an attempt to overcome the perennial problem of who does the work at home which leads to the men banding together to win them back. The crunch comes when the women become more than colleagues and housemates and the men force the issue with threats.

All of this is treated with humour and visual style. A lot of thought has gone into visually representing what’s happening in the narrative by having naked women as the back-drop, in the exterior scenes where billboards loom large and in many of the interior scenes where they loom equally as large as art. But I found this constant bombardment of images tiring after a while. I started to wonder whether there was a tad too much of it and whether it amounted to titillation, something I suspect Malea did not intend. Rather, I think Malea actually intended to be critical of the way women’s bodies are used to sell consumer goods and to “decorate” various environments. However, she seems to have fallen into the trap of actually doing what she is trying to be critical of.

When I compared Risotto with Female Company, I re-evaluated the latter in light of the way the two films portray women and gender issues. For my taste, Risotto is a little too self-assured in its attempt to deal with serious issues. Female Company on the other hand, does not purport to be anything other than what it is – entertainment with broad appeal, which cannot resist the temptation to resort to soft-core in the end. But it presents the soft-core in a humorous way to highlight the ludicrous things we do when lust has a hold of us. Risotto, however, is a victim of its own seriousness. It tries too hard and obviously to “make a statement”. And it reinforces the very stereotyped images of women it wants us to question.

I also found Risotto lacking in the kind of spark Female Company displays, albeit, not very often. The characters, even the sexist male partners, in Risotto are ultimately all so bloody nice, while the characters in Female Company are flawed human beings, some outrageously so. I prefer the way the sexiness of the latter is referred to at times, through raunchy talk, and depicted in the often funny things the characters are turned on by (eg. the classics teacher who has her student recite Latin verbs post-coitally) to the “nice” characters in Risotto and the clean, well-groomed sex they have.

Peppermint (Costas Kapakas, 1999) deals with sexual desire of a different kind – that between two first cousins. Stephanos (Giorgos Gerontidakis-Sempetadelis) and Marina (Markella Papa) grow up together, playing in Stephanos’s home. Gradually, their closeness goes beyond the bounds of what is considered socially acceptable. This storyline is overtaken by the storyline revolving around Stephanos’s comic antics, a Greek Dennis-the-Menace. The two narratives don’t sit comfortably side by side as little attention is given to blending these into one coherent whole. The comedy is played larger than life with some funny caricatures (the busty teacher, the communist uncle, the ditzy and royalty-obsessed aunt) and some funny scenes (eg. when Stephanos is summoned to the blackboard to complete an algebra equation). But the drama of Stephano’s relationship with Marina doesn’t quite work. The scenes between the two don’t convey a sense of their growing mutual attraction; they express little tension or build-up so that when their relationship is “revealed”, it’s a case of ho-hum.

It’s a shame Kapakas does not quite know what he wants the film to be (a comic book of a naughty boy’s antics or a drama about “illicit” love) because he handles sensitively the scenes when aunt Venetia (Zoe Voudouri in a nice performance) dies and bequeaths to Stephano the contents of the forbidden “locked room”. Kapakas even brings poetry to the scenes where Stephano pays homage to Aunt Venetia and his mother when they die. The film suffers from a sagging pace and most of the time the actors seems to have delayed reactions for no apparent reason and with little effect. However, the ending is good as there’s no resolution, not even an attempt at one.

2000+1 Shots (Dimitris Athanitis, 2000) actually translates into 2000+1 moments and refers to a conversation between two young male characters (all of the characters remain nameless) about their different perspectives on New Year’s Eve of the year 2000. One thinks it a sham as the new millennium doesn’t start on January 1, 2000, but on January 1, 2001, whereas the other (one of the main characters) sees New Year’s Eve as just a moment that like every moment in life, will pass. But life, his friend says, is made up of a series of moments and as such, has meaning, he implies.

There are a couple of “moments” of hope, not only in Greece but all over the world, in this fairly bleak view of the days leading up to New Year’s Eve of the year 2000. The lives of eight, largely lonely, disaffected people in Athens eventually intersect on the eve of 2000. A homeless Albanian boy who can still marvel at the fireworks, a businessman cheating on his wife, his mistress trying to make some decisions about her future, a depressed student (the one who sees life in terms of disconnected moments) who resists family pressure to go home for Christmas, his lonely middle-aged neighbour, a desperate unemployed man who becomes a hit man.

This is a mixed bag. The acting is mainly laboured, though Demosthenes Papadopoulos (the student) and Viki Volioti (the mistress) are both good, as they usually are. The direction lacks discipline so that the pacing is uneven. And the way some of the stories are depicted is clichéd (the man cheating on his wife with a much younger woman), while others poignantly convey the lack of connection between people living in a big city, something that is emphasised at Christmas and other occasions when we are supposed to be surrounded by lots of other people, having a great time.

I’m looking forward to the 10th Greek Film Festival for another distillation of contemporary Greek cinema.