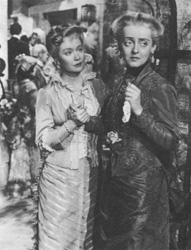 Tonight, just tonight she belongs to me. It’s not too much to ask. Tonight I want her to call me mother!

“Miriam Hopkins was a wonderful actress but a bitch”, said Bette Davis of her one-time co-star. “The most thoroughgoing bitch I have ever worked with.” (1)

For all its merits as a film, The Old Maid has long since been eclipsed in movie lore by the drama of its own making. With its on- and off-screen battle between two formidable leading ladies, it became the site of the very first of the notorious Bette Davis feuds. She and her co-star, Miriam Hopkins, famously loathed each other. Having only just cemented her status as Hollywood’s premiere drama queen, Davis now set the stormy (and, ultimately, destructive) course for much of her later career.

In the case of The Old Maid, this dose of real-life venom gave substance to what is, otherwise, a fairly saccharine and moth-eaten story. In 1860, a flighty Philadelphia belle (Hopkins) jilts her true love (George Brent) for a suitor with more money. Her mousy little cousin (Davis) has a fling with him on the rebound – and bears his illegitimate child. Blinded by jealousy of a love she herself has never experienced, Hopkins comes to her cousin’s aid. Under the pretext of giving the mother and child “a home”, she systematically robs her cousin of everything she has – her daughter’s love, her identity as a mother, her memory of youthful passion – essentially, her very life. Beneath its glossy soap-opera facade, The Old Maid is less a story of love than a story of hate.

Regrettably, the Warner Bros. melodrama machine shifts the focus of the original Edith Wharton novella, robbing it of much of its interest. At the heart of Wharton’s narrative is Delia Lovell Ralston – the character played by Hopkins. A monstrously selfish and superficial woman, Delia has learned that “one can do almost anything (perhaps even murder) if one does not attempt to explain it” (2). Seeing the story through Delia’s eyes, the reader is a horrified witness to her – always successful – attempts to rationalise her own callous behaviour. By killing her Cousin Charlotte with kindness, Delia turns her into “The Old Maid” of the title. The reader becomes – to some degree – her accomplice, her partner in crime.

By shifting the focus onto Bette Davis (who, ever since her 1938 Oscar for William Wyler’s Jezebel, was queen of the studio) Warner Bros. turns The Old Maid into one more sacrificial story of mother love. Despite its lavish period trappings and chunks of dialogue lifted directly from Wharton, The Old Maid is dramatically indistinguishable from Madame X (Sam Wood, 1937) or Stella Dallas (King Vidor, 1937) or Mildred Pierce (Michael Curtiz, 1945). Molly Haskell has argued that such conventional dramatic narratives involving “the spectacle of a woman owned by her children or consumed by her maternal zeal” are “as much the mainstay of the woman’s film as” they are “of American culture and middle-class marriage” (3). And like so many Hollywood films of its day, The Old Maid blithely turns its “classic” source material into trash.

This may, in fact, be as much the fault of Davis as of Warner Bros. Her biographer Barbara Leaming reveals that Davis had, in fact, hoped to play both Delia and Charlotte: “It seemed to Bette that portraying two contrasting cousins, rivals in love, would be a stunning tour de force.” (4) Also a ludicrous and unworkable one, given that The Old Maid does not hinge on mistaken identity, as her two later “double act” movies do (A Stolen Life [Curtis Bernhardt, 1946] and Dead Ringer [Paul Henreid, 1964]). Frustrated in her ambition, Davis allegedly used her power at the studio to reduce Hopkins’ role. She also reduced, unwittingly perhaps, the impact of the film.

The final irony, in the middle of all this intrigue, is that The Old Maid works regardless. As T. S. Eliot once wrote of Wilkie Collins’ novel Armadale: “If it has no merit beyond melodrama, it has every possible merit that melodrama can have.” (5) Credit is due not only to the expert playing of its two stars – Davis mutating from breathless romantic ingénue to frustrated harpy, Hopkins all poisoned elegance and mellifluous malice – but also to its director, Edmund Goulding. Although lacking the critical acclaim of George Cukor or Clarence Brown, this London-born actor-turned-writer-turned-director was one of Hollywood’s masters of melodrama, and an adroit and sympathetic director of women. He it was who piloted Greta Garbo through her silent film version of Anna Karenina – the one with the happy ending, known as Love (1927) – as well the Oscar-winning Grand Hotel (1932), in which she actually does say “I vont to be alone”. Twice, as a matter of fact.

In his four films with Davis (the others are That Certain Woman [1937], Dark Victory [1939] and The Great Lie [1941]) Goulding played a crucial role in shaping her star persona. Here, as in other Davis vehicles, she is a woman struggling to play roles (as a mother, as a lover, as a wife) that society will not allow her to play. Inevitably, these roles are usurped by Hopkins or some other actress – one who has a socially sanctioned image as a “real” woman. This characteristic may help explain, at least partially, Davis’ vast appeal to gay fans.

This accounts for, as the wheel turns full circle, the consuming bitterness and jealousies and feuds that would characterise Davis’ relationships with other women, both on and off the screen. Not only Hopkins in The Old Maid and Old Acquaintance (Vincent Sherman, 1943), but also Joan Crawford in What Ever Happened to Baby Jane? (Robert Aldrich, 1962) and Susan Hayward in Where Love Has Gone (Edward Dmytryk, 1964) – right up to Lillian Gish in The Whales of August (Lindsay Anderson, 1987). Other women, for Davis, were always “the enemy”, a hostile and alien force, denying her the feelings and identity that are hers by right.