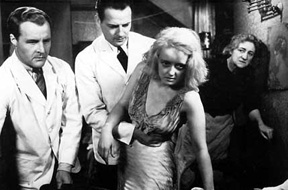 Being alone, you know, can be very lonely. But at least with people around, then you can be lonely with noise.

Of Human Bondage begins with a twilit panorama of Paris under the titles; the kind Jean-Pierre Melville would use to open Bob le flambeur (1955) (1). A romantic waltz on the soundtrack; the happy urgency of a young pipe-smoker in a cab; the rush of lights and traffic. This is to be a film about Paris, modernity, artists, romance. Within three minutes we learn that the man has a club-foot, is so mediocre at painting he must give it up, and the film proper is going to play out in dreary London.

This bathos, this holding out of promises to be broken, structures the film as it tells the story of Philip Carey (Leslie Howard), a middle-class medical student who becomes obsessed with a slatternly tea-maid with airs, Mildred Rogers (Bette Davis); she manipulates Philip for food, money and shelter, but seeks sexual satisfaction elsewhere. In the film’s extraordinary first half, Philip transforms this unpromising situation by fantasising about the object of his desire – in the process becoming the artist he never was as a painter – only for coarse reality to crash in again and again.

W. Somerset Maugham’s “autobiographical novel” (2), first published in 1915, tries to check this potentially disruptive infatuation with dutiful prose, an overall narrative arc charting the ironic pilgrim’s progress of its (anti-)hero to mediocre consciousness (3), and a clear demarcation between the story’s “real” world and Philip’s occasional dips into hallucination and fantasy.

This is not so clear-cut in John Cromwell’s film. Its rhythms surrender to Philip’s obsession; camera movements, framing, cuts and visual effects are attuned to his inner world, as in the sequence where he waits for Mildred in Victoria Station, seeing her image in every woman that passes, whether fair or dark, young or old, pretty or plain. Anatomical pictures in his medical books, or the classroom skeleton, metamorphose into a silent, pliant Mildred, linking his obsession to disease and death, and prefiguring Mildred’s ultimate, punitive demise. Settings for scenes are endlessly repeated: in particular the restaurant table, where awkward meals are transfigured and replayed in Philip’s daydreams, framed as a recession of similar couples at similar tables, imaging his desire as a hall of mirrors in which he is imprisoned. Transitions between fantasy and reality blur: at these moments Of Human Bondage ceases to be a prestige adaptation of a famous, if controversial, middlebrow novel, and becomes a narrative-displacing, avant-garde cycle of monomania, desire, and deluded male power, prefiguring Hitchcock’s Vertigo (1958) and Buñuel’s Cet obscur objet du désir (1977).

What gives this film an added piquancy absent from those famous films’ analyses of desire is its sublimated homoeroticism. A closet, though enthusiastic homosexual, Maugham, like Marcel Proust in À la recherche du temps perdu (1913-1927), used a narrative ostensibly about heterosexual passion to explore his own “anti-social” sexuality (these were the years following Oscar Wilde’s imprisonment; Maugham married unhappily to divert suspicion; he gives his protagonist an unconvincing happy ending in marriage with a buxom, child-bearing non-entity). The character of Mildred, according to Maugham’s intimates, was an amalgam of rent boys and lovers (4): she is often described in masculine terms, while descriptions of female sexuality are coloured with disgust (5); the narrative of cross-class, unconsummated, elusive desire can be read as a story of thwarted gay love. Some of this is retained in the film, such as the contrast between “abnormal” (because physically maimed), “sensitive” Philip and the raucous sexuality of his friend Griffiths (Reginald Denny), to whom he effectively pimps Mildred, unable to bed either of them.

John Cromwell is seldom considered in the same sentence as Hitchcock and Buñuel; he is usually characterised as a safe adapter of bourgeois literary properties, such as Of Human Bondage, Anthony Hope’s The Prisoner of Zenda (1937) and Arthur Wing Pinero’s The Enchanted Cottage (1945). Before he came to direct Of Human Bondage, Cromwell was already an established Broadway actor and director (6), and like other stage-to-screen masters, such as Ophuls, Sirk and Fassbinder, he intensifies the resources of the theatre (the framing of characters and décor; the use of sound and silence; the pacing of individual sequences) to cinematic effect. One brilliant example is the scene of Mildred’s first return to Philip after her sham marriage to another lusty lover (Alan Hale). The fantasy of the film’s early sequences is engendered by moving camera, dreamy lighting, heightened soundtrack and a Max Steiner waltz which anticipates David Raksin’s theme for Laura (Otto Preminger, 1944), another film haunted by compulsion and elusive women. This is replaced by harshly lit, static set-ups, and an oppressive absence of sound, save for the faint rattle of of a passing train, echoing the earlier sequence in Victoria Station, when Philip made another decision with fateful life-consequences. A more obviously cinematic flourish represents the circumscribed ritual of Philip’s desire with a montage of his clumping feet: they seem to move forward, but go back to exactly where they started.

If Of Human Bondage is remembered today, however, it is for Bette Davis’ star-making performance as Mildred, peroxide and shrill in a variety of wobbly accents, appropriate to a working-class character trying to “better” herself by attaching herself to money, but brought down by desire (or “bondage”, as another of the film’s spurned lovers puts it) to prostitution, disease and a humiliating death. It takes a great deal of critical ingenuity to recuperate Mildred as a sympathetic, or at least understandable, figure (7): this is a character who (shock! horror!) prefers sex, status and money to quiescent motherhood. The film doesn’t quite redress the balance of class-and-gender-loathing of the book: the focus on Philip’s sado-masochistic subjectivity gives Mildred little narrative autonomy. She is an object to be recreated in his vision, staged or sculpted by Philip, who, after a series of humiliating encounters with authority figures, wants to become a controlling Pygmalion figure himself (8). But Davis is extraordinary – whether in a good or bad way, I never can tell; her inglorious death scene catches the “prosthetic, mannequin-like quality” Lisa Shapiro Sanders found in Maugham’s original (9).