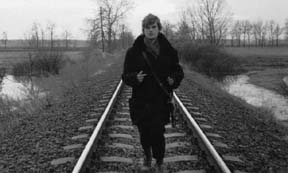 As the weather finally turns cold after six months of summer, the 48th Sydney Film Festival is poised to begin. This year’s program seems rather pared down. However, while there have been some murmurings from regular subscribers about the reduction of screenings per evening from three or four per night to two, for others, a number of the films scheduled for screening this year promise to more than compensate for this apparent parsimony.

While being compared to Tarkovsky, Jancso, and Angelopoulos, and celebrated by Jonathan Rosenbaum of The Chicago Reader and Stephane Bouquet of Cahiers du Cinéma, Béla Tarr was described by Jonathan Romney as existing as “only a rumour” for cinephiles for some time (Jonathan Romney, “Out of the Shadows” The Guardian, March 24, 2001). Despite a feature film career spanning more than two decades, he is still so unfamiliar to Western audiences that when a major piece on his work appeared in Sight and Sound recently (April 2001, pp. 22-24) the only reference to it on the cover was as an article on “Susan Sontag’s favourite director”, rather than by his name or even film title.

Tarr’s seventh feature is based on the 1989 novel by his long-time collaborator Laszlo Krasznahorkai, The Melancholy of Resistance. Set in rural Hungary, the film has been described on the one hand as a political parable, while Tarr’s editor of 20 years, Agnes Hranitzsky describes it as closest to The Wizard of Oz (Romney, “Out of the Shadows”). Featuring an oversized whale, it also contains only 39 shots in its 145-minute duration. Reasons enough for seeing the film perhaps, but given the lack of access in Australia to the films of even some very prominent filmmakers, the screening of the work of this mysterious and lauded auteur seems like something of an event.

Agnes Varda’s extraordinary essay film achieves a lot for such a small and personal work. Not only has it received awards at festivals all over the world (the People’s Choice Award at the Montreal International Festival of New Cinema and New Media; the Gold Hugo for Best Documentary at the Chicago International Film Festival and twice as many votes for favourite film from international critics at the Buenos Aires International Independent Film Festival), but it has also been commercially successful in France which sets it apart from other examples of the form.

It is not hard to see why – the Gleaners and I is at once humorous, whimsical, poetic, political and moral. Varda herself describes the film as social documentary and yet it also reflects a certain intimacy, not least because she herself is something of a gleaner. Her meditation on waste and salvaging raises fundamental questions about how we live. A seventy-five year old livewire, Varda spends much of the film roaming around France with her DV camera – her elegant shots bearing traces of a remarkable career as she composes images that are both beautiful and meaningful. One of the most enduring images (and there are many) is of a pile of heart shaped potatoes, collected with absolute enthusiasm by the filmmaker from a mountain of them dumped in a field. She transforms these from deformed refuse into something precious and pithy.

In some ways, the film is a return to the world of her feature Vagabonde (1985), which also engaged with life on the margins. Yet while that film was necessarily bleak because of its structure, here the gleaners Varda engages with, people outside of the mainstream whether by choice or circumstance, clearly understand something that the rest of society can’t quite comprehend. And it is in this sense, as well as through Varda’s own obvious energy, that the Gleaners and I uncovers an optimism which is addictive.

A description of Ingmar Bergman’ s autobiography reads “The autobiography is exactly like the films: beautiful and repulsive; truthful and phoney; constantly startling and occasionally embarrassing” (1). The same could be said for Faithless, Liv Ullman’s third feature, this time with a screenplay written by Bergman himself. Loosely based on an affair Bergman had in the ’40s (which he recounts in pages 160-71 of his autobiography), the film seems dated in many respects and also heavy with Bergman’s influence. Indeed, the main narrative is recounted to a filmmaker called “Bergman” who bookends the film. (One wonders what Woody Allen would make of these scenes – at once so ripe for comedy and yet depicting one of his greatest influences.) Still, while initially it seems to be a rather heavy-handed treatment of the absurdity of human behaviour, the film gains a lot on reflection. Ullman also draws out some beautiful performances from her actors particularly Lena Endre as Marianne and the actress who plays her young daughter.

*The Apu Trilogy (Dir: Satyajit Ray, India, Pather Panchali, 1955, 112 mins; Aparajito, 1956, 108 mins; The World of Apu, 1960, 103 mins)
This is a wonderful opportunity to see fully restored 35mm prints of these classics. With new subtitles and digitally remixed and remastered scores by another Bengali master Ravi Shankar.

*The Sorrow and the Pity (Marcel Ophuls, France/Switzerland/Germany, 1971, 260 mins)
A new 35mm print of a classic with complete subtitles for the first time.

*Paul Schrader: ‘On the Edge of the Mainstream’ (Dir: Paul Schrader, USA, Light Sleeper, 1992, 103 mins; Blue Collar, 1978, 114mins; Hardcore, 1979, 108 mins).
Speaking as a long-time fan, it’s a great shame that veteran screenwriter/critic/director Paul Schrader will not be attending the Festival in person. One hopes that these films stand up in a festival context without what would no doubt have been fascinating and revealing introductions. Here’s hoping for a satellite link-up.

Other films of interest

A One and Two./Yi Yi (Edward Yang, Taiwan/Japan, 2000, 173 mins)
Yang won the Best Director prize at Cannes 2000 for this film. It has been critically successful internationally.

The Circle (Jafar Pahani, Iran/Italy, 2000, 91 mins)
Winner of the Golden Lion at Venice 2000, The Circle explores discrimination against women in Iranian society.

Time for Drunken Horses (Bahman Ghobadi, Iran, 2000, 77 mins)
Set in the mountain passes between Iranian and Iraqui Kurdistan, Ghobadhi was winner of the Camera d’Or for Best First Film at Cannes 2000.

The Day I Became a Woman (Marziyeh Meshkini, Iran, 2000, 78 mins)
Meshkini was Mohsem Makhmalbaf’s assistant director on The Silence (1998) and a pupil of the Makhmalbaf Family School.

You Can Count on Me (Kenneth Lonergan, USA, 2000 111mins)
Winner of numerous US awards.

For full program and ticketing details go to http://www.sydneyfilmfestival.org/