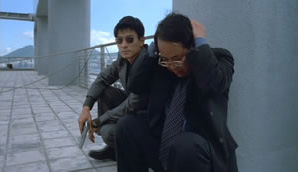 Where am I going to die, when am I going to do. All that doesn’t matter to me any more. The most important thing is that I don’t die in a police station.

– Cheung (Andy Lau) in Running out of Time

Johnnie To’s prodigious output attests to what seems to be an insatiable appetite for celluloid. The track record his Milky Way Image Production Company has established in the last decade can only be compared, I imagine, to the similar flood of releases directed and/or produced by Roger Corman in the early part of his career. To evidences a similar perspicacity for reading the public mood as well as an ability to recover quickly from the occasional misfire. Like Corman successfully following on from the box office debacle of The Intruder (1962), To put aside the moral and visual murkiness of The Longest Nite (1997) and Expect the Unexpected (1998), films produced by To that landed with a thud in the Hong Kong market, and came back with the one-two punch of The Mission (1999) and Running out of Time. In the process, he recovered his commercial equilibrium, even though the inhibitions he faced on each occasion would have fazed a lesser man. The Mission was shot in 18 days without a completed script and on a low budget ($US320,000), while Running out of Time, amazingly enough, was completed sporadically over the course of two years. It is this kind of dexterity that contributes to David Bordwell’s categorisation of To as “the most versatile talent” in Hong Kong commercial film with “the strongest track record since John Woo and Tsui Hark” (1).

To can wring more interesting variations out of established generic parameters than a Shanghai chef can create virtually innumerable strands of noodles from a single pile of dough. He particularly likes to toy with the doppelganger motif, playing off characters as well as performers for maximum exhilaration. The Longest Nite (signed by Patrick Yau but apparently taken over by To after just a few days of shooting) pits a playing-against-the-rules cop (Tony Leung) against a physically similar take-no-prisoners hit man (Lau Ching-Wan). Their climactic shootout in a hall of mirrors mockingly mimics Welles’ The Lady From Shanghai (1948), as well as overturns the clear distinction between criminality and social convention. Leung and Lau engage in mano a mano bursts of explosive aggression, as though little distinguishes the two other than who pays their salary.

Running out of Time continues this practice as well as carries over actor Lau Ching-Wan, even though in this case he works as a negotiator for the police with Hong Kong superstar Andy Lau as his adversary. (And speaking of Lau Ching-Wan, why hasn’t the West caught up with this estimable actor, who is as sardonic in this film as he is sullen in its predecessor; time after time, he consistently compels one’s attention without over-acting.) To has stated that one of his rationales for making the picture was to challenge the usually flamboyant and exuberant Lau: “I wanted to get a new Andy Lau out of Andy Lau. In the past, I thought Andy Lau’s acting was too self-conscious… I wanted to work with Andy to bring out a different kind of performance.” (2) And succeed he does, as the star reaps considerable empathy on the part of the viewer by internalising his emotions and intentions, keeping them as concealed as a seasoned gambler. The spirited interplay between the two stars and the ingenious gambits initiated by Lau’s terminally ill protagonist, Cheung, make for an engaging and sometimes emotionally wrenching version of the ingenious heist narrative that the West has commonly produced, though far less effectively, in something along the lines of The Thomas Crown Affair (Norman Jewison, 1968) or The Sting (George Roy Hill, 1973).

We meet Cheung on the roof of one of those improbably tall Hong Kong business towers, engaged in holding a businessman hostage and robbing his employer. Soon, however, we realise that these actions form a diversion in order to deter the police from Cheung’s real object: a $32 million diamond in the possession of a bald-headed mastermind (Waise Lee) who offended Cheung’s father. Cheung has only days to live, and the occasions when his fatal cancer leads to unsettling expulsions of blood, contrasting all too effectively with To’s primarily pallid visual palette, bring a melancholic undertow to the narrative. However much we may wish to empathise with this ingenious individual, he will not survive the final credits. In the meantime, we learn little to nothing about Cheung’s past, yet the plot makes clear his desire for revenge amounts to the singular rationale for his existence as well as invigorates his depleted physical shell.

Cheung’s antagonist, Inspector Ho (Lau Ching-Wan), inhabits a condition very much like death-in-life. Unchallenged by his job and emotionally unattached to other human beings, he comes across as trapped in a bubble of weariness and sarcasm. One of his few forms of retaliation comes from baiting the thin-skinned and thick-headed Chief Inspector Wong Kai-fat (To regular Shiu Hung Hui). Cheung challenges Ho to employ his intelligence and kick start his empathy, as the two men initiate one of those unrequited masculine romances that recur throughout the films of John Woo. Other characters chide Ho for his isolation and even insinuate that he is gay, but he comes across as much as anything as hermetically sealed off by his own intelligence, expiring emotionally as much as Cheung does physically.

The chase sequences, comic interplay and considerable atmosphere of Running out of Time coincide with a sense that few actions will ever lead to completion; that missed opportunities and abandoned ambitions rule our lives. Escaping from the police, Cheung meets a beautiful young woman (Yo Yo Mung) on a bus, but To refuses to resort to a romantic subplot. You sense instead all the unleashed eroticism of a truncated attraction, one more failed connection in a city that lacks any interpersonal cohesion.

The commercial and critical success of Running out of Time – a Best Actor award for Lau at the 2000 Hong Kong Film Awards and Best Asian film at the 2000 Fant-Asia Film Festival – led to the inevitable To-directed sequel in 2001. Ekin Cheng stands in for Andy Lau, and while the character’s criminal chicanery comes across as even more ingenious and elaborately planned than in its predecessor, Running out of Time 2 lacks almost any emotional undertow whatsoever. The fact that Cheng’s character is a magician excuses his actions from any obligation to the rules of rationality, and the interjection of CGI sleight-of-mind makes for a more lavish look yet a hollow final product. If, in the end, Cheng disappears, Lau lingers in the mind long after the final credits. And where does that leave Inspector Ho: alone in the noodle shop, content with his memories of the masterful misbehavior of two mysterious but never malevolent law breakers.