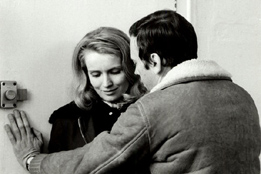 Typically, Eric Rohmer is introduced as being the oldest member of the French New Wave, with the implication that his quiet, talky, staid style is less radical and far removed from the films of the other key founding members Claude Chabrol, Jean-Luc Godard, François Truffaut and Jacques Rivette. We most often associate this movement with a style that breaks classical conventions, is shot on location, often in the streets of Paris, is full of cinematic quotations, and heralded the politics and sensibilities of a younger generation that would dominate the cultural life of the West in the 1960s. This is probably because Truffaut and Godard are the most well known New Wave directors and their styles have come to define the movement. It is true that Rohmer’s breakout film from 1969, My Night at Maud’s, does not have the stylistic flourishes of these films. Nevertheless, it is a rich and satisfying work, which is a pleasure in its own right and can aid in gaining a fuller understanding of the New Wave.

Many of the intellectual underpinnings of the movement can be found in the film criticism written by its future directors in the pages of the journal Cahiers du Cinéma, such as Truffaut’s famously scalding essay about the state of French film in his 1954 manifesto “A Certain Tendency of French Cinema” (1). Another important, influential essay, particularly in the context of Rohmer, is Alexandre Astruc’s “Birth of a New Avant-Garde: La Camera-Stylo” written in 1948 (2). Astruc argues for the cinema to become a more essayistic and personal form where the camera literally acts as the director’s pen, la camera-stylo. Truffaut writes about the unoriginality of the high prestige, “tradition of quality” studio films made in France. He points out they are usually plodding adaptations with formulaic, anti-clerical and anti-bourgeois messages, hypocritically written by extremely bourgeois screenwriters. Truffaut argues for a more nuanced cinema, written by directors or with a more original approach to adaptation, where middle class life and faith are more honestly dealt with and depicted. They felt that the cinema should be personal and able to touch the intangible, mysterious aspects of human existence. Although it appears well after the movement’s most influential years, My Night at Maud’s is a film bursting with these ideas and this sensibility, very much a film of the New Wave..

The film opens as Jean-Louis (Jean-Louis Trintignant), an engineer for Michelin who has recently been transferred to the French provinces, drives from his house to a cathedral in Clermont-Ferrand to attend a Christmas Eve mass. During his devotions he notices a blonde woman (Marie-Christine Barrault), but does not approach her. After church he runs into a friend, Vidal (Antoine Vitez), from his high school days and has a meal with him. Afterwards, Vidal mentions that he wants to visit his friend Maud, a recently divorced mother and pediatrician seductively played by Françoise Fabian. Vidal, obviously enamoured of Maud, encourages Jean-Louis to spend the night with her. Jean-Louis resists, but decides to stay. Perhaps Vidal wants an excuse to hate her, or maybe he is testing her. It is one of the many questions about love that the film poses.

During dinner with Maud and Vidal, Jean-Louis claims not to be interested in casual affairs anymore, professing a strong Catholic faith and the desire to settle down and marry. Jean-Louis, who recently began rereading the writings of Blaise Pascal, relates his situation to the 17th century philosopher’s famous wager that it was logical to believe in God, because if “he” does not exist, you lose very little by believing and gain everything if he does. From a religious point of view the wager is unsatisfying, because it does not require true faith; its simply playing the odds. Pascal was a Jansenist, a sect of French Catholicism that believed that salvation can only be achieved through God’s grace, that is predestined, regardless of our actions. In opposition to the Jansenists, the Jesuits advocated actively pursuing a virtuous life to enable entry into heaven. Jean-Louis likes to think of himself as following the Jesuit path, but Rohmer’s scenario at Maud’s is designed to see if this is true. My Night at Maud’s is the third part of a series of six films that make up Rohmer’s Moral Tales (contes moreaux), Each examines the philosophical and moral conundrums surrounding love and contemporary life.

The film is not merely about Jean-Louis’s self-deception or a sophomoric test of male self-control. Maud is not simply a screenwriter’s device; she is a fully-drawn character who is completely aware of the situation. It is Maud’s honesty and ability to see what is happening clearly that draws attention to the ways in which Jean-Louis hypocritically couches his subjective feelings in abstract, rational, and culturally sanctioned terms. Rohmer’s precise and natural dialogue reveals the characters’ philosophical positions as well as their vulnerabilities, contradictions and hopes. The film’s power comes from the looming spectre of the hope for happiness that underlies all of the characters’ actions, but remains out of reach. Rohmer captures the excitement and anticipation, along with the wariness and fear that accompany our decisions about romance, giving the film an unexpected sense of urgency and suspense. The plot continues well after Christmas Eve and we see the consequences of Jean-Louis and Maud’s choices and the bittersweet tone continues, ending with a satisfying note of wistful regret and a rather painful irony.

Rohmer’s approach has often been called literary. The way in which he weaves moral philosophy and actual quotations from a variety of sources into his characters’ speech is reminiscent of Dostoyevsky, or other 19th century novelists. It is Rohmer’s commitment to realism and naturalistic dialogue and settings that make his films specifically cinematic. He combines his intellectual interests with an intense examination of everyday life. We see this in the wintry landscape of the rather ordinary streets of Clermont-Ferrand, beautifully shot by the great Néstor Almendros (a frequent collaborator of Rohmer’s and the cinematographer of Terrence Malick’s magnificent Days of Heaven made in 1978). He captures the unnatural silence of city streets in the snow as well as the grey slipperiness of roads covered in sludge. As in all great films, what we see and hear when no-one is talking is as important as the plot. The magic of the film is that it moves along with a charming lightness, telling its story, and never seeming overly cerebral or melodramatic; it makes us believe in and feel for its characters, even as we analyse and dissect their actions. Compared to the films of Godard, who confronts us with his Brechtian disruptions and overt political intent, My Night at Maud’s seems rather tame. Yet the clarity of Rohmer’s vision, the intelligence and intensity that he brings to his subjects, as well as the questions he wants to ask, are roughly the same.