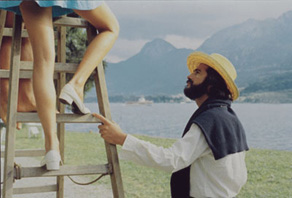 The meaning of contes moreaux is somewhat lost in its common English translation “moral tales”. Instead of a more religious definition, Rohmer says that “a moraliste is someone who is interested in the description of what goes on inside man… they are people who like to bring their motives, the reasons for their actions, into the open.” (1) There was also a very pragmatic reason for pre-defining the major themes of a series of films as it wouldn’t allow for producers to push for more populist subject matter (2). But perhaps the main reason for such an endeavour was to be able to focus on refining and experimenting with technique, building on the success of each previous film.

“The heroes of a story are always blindfolded. Otherwise, they wouldn’t do anything.” The revelatory words of Aurora, the character played by Aurora Cornu, a writer in real life, at once describe a key aspect of Rohmer’s dialectic and distinguishes Claire’s Knee from the other contes moreaux. It is his solution, for this film at least, to the dilemma of getting the actors to be as authentic as possible without falling into the traps of conventional acting. With La collectionneuse (1967), he emphasised single-takes, with dialogue taken from his taped conversations with the actors themselves. My Night at Maud’s (1969) was more script-based; Jean-Louis Trintignant, the film’s protagonist, even felt oppressed by his inability to improvise (3). But with Claire’s Knee Rohmer, in a way, makes himself a character, the writer who observes the rest of the characters as “guinea pigs” and tricks them into acting out his plot.

The handwritten dates, which give structure to the film, also “correspond to the notes taken by the novelist” (4), and help piece together the very selective fragments of a rather long period of time. For example, one scene has Aurora chastising Jerome for boring Laura by talking about the Swedish weather which he is so fond of. Then there is a quick cut to Jerome privately chastising Aurora for preventing him from telling the family of his upcoming marriage by beginning to talk about the weather. We are given the bare necessities in the development of the character explicitly from the author’s perspective, instead of a story posing as reality with the writer’s and director’s intent subtly (or sometimes not-so-subtly) leaking through.

The film’s use of the metaphor of the knee is somewhat indeterminate, and one’s interpretation of its meaning will likely reflect more on one’s own experiences than on Rohmer’s intent. (When Rui Nogueira asked “Does Claire represent for Jerome a possibility that he has lost?” Rohmer responded, “If you like.” (5)) But there is significance in how less explicit the sexuality in the film is in contrast with La collectionneuse and My Night at Maud’s. Rohmer says, “she stands for an attraction that is purely erotic, in the most refined sense of the word.” (6) Indeed, Jerome says that even if Claire threw herself at his feet he would turn her down, and Rohmer describes this seemingly bizarre desire when he says that “touching her knee is simply a way of being able to say ‘I touched it’…. Possession for him adds nothing to desire.” (7) John Orr has a less flattering interpretation: “His obsession with Claire’s knee is a metaphor for the limit of desire…. Only the element of surprise his malice creates and his gesture of comfort give him the chance of doing so.” (8) But, as Rohmer says, “there are things you hear and things you see, and the rest is supposition” (9).

Visually, Rohmer and cinematographer Néstor Almendros revisit the beach setting of La collectionneuse. But this time, instead of having to overcome the obstacles brought forth by a low budget and small crew, they had to face a new set of potential problems. Almendros recalls that “Rohmer resisted the temptation to let too many pretty panoramas turn the film into a collection of picture postcards” (10). This is also referenced or reinforced by Aurora’s line, “It’s too beautiful for me to work well”. Instead of letting the scenery dominate the characters, Almendros slightly overexposes the background to retain the beautiful colours but in a more subordinate way. While black-and-white suited the primarily urban wintry setting of My Night at Maud’s, the texture-less greens and blues of the summer countryside helped Rohmer achieve the “Gauguin-esque” style that he pursued.

In each of these aspects, Claire’s Knee was a significant step forward for Rohmer. In it we can see the visual discipline so prevalent in The Marquise of O… (1976) and Perceval le Gallois (1978), the self-referential aspects of the Comedies and Proverbs, and of course the impressionistic style of the Tales of the Four Seasons. But few of his films compel the viewer into such an active role. We are invited to help tie together the finished novel from the notes presented to us, and, in doing so, we become the moraliste, exposing and analysing our inner motives and desires.