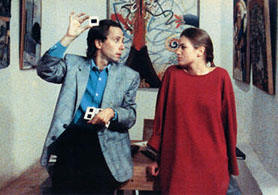 The 4 Adventures of Reinette and Mirabelle (1987 France 95 mins)

While not highly regarded (by some) in the expansive Rohmer canon, The 4 Adventures of Reinette and Mirabelle stands as one of Rohmer’s most playful, if not hilarious features. Filmed quickly on 16mm while Rohmer was waiting to get decent sunset shots for his sublime Le Rayon vert (1986), The 4 Adventures of Reinette and Mirabelle features mainly non-professional actors who improvised most of the witty and frank dialogue. Rohmer bookends the film with chintzy lo-fi electronic theme music, a sort of knowing wink by one of the original “new wavers” to the new-wave music of the 1980s, and perhaps to the emerging “indie” cinematic movement of the time as well (1). Yet Rohmer’s old-school (cinematic) “new wave” chops are working in full effect here. From the shaky vérité camerawork, to long discussions about morality and art, his romantic heart is working in cruise control, delivering a film that ably stands it’s own ground.

When it comes to cinema, and the analysis/critique thereof, it seems that the main line-of-thought or core source of dramatic gravitas is the problem of repression. In the 4 Adventures of Reinette and Mirabelle, Rohmer does away with any such dogmas and dramas, the main “problem” here being expression (and how “modernity” and capitalism interfere with it). In the first episode, “The Blue Hour”, the city slicker Mirabelle, and ditsy nature-girl Reinette meet over a flat tyre. Reinette invites Mirabelle back to her studio, where she is awed (in her own deadpan way) by Reinette’s expressive and erotically charged surrealist paintings. Reinette explains how she can only express herself through her art, especially the “silent” expression that art so sublimely imparts (then blabs on incessantly about the meaning of it all). She then invites Mirabelle to experience the magical “blue hour”, a period before sunrise when nature forestalls the sun making its ultimate “expression”. And so begins the sweetest and funniest of Faustian pacts – Reinette’s openness and lack of repression is what ultimately leads to her problems when she reaches the big smoke, and where she learns her ultimate, hilarious lesson, via her cynical and street-smart new friend.

The second chapter, “The Waiter”, while the weakest in the film, is the most overt in regards to the problems of those who “over express”. Reinette is now ensconced in the pacy rhythms of the city, a far cry from the natural simplicity from where she came. The gruff Parisians are anxious and over-expressive in helping her find her way, and worse is to come when she encounters the ultimate in French contrariness, the annoying French waiter. The verbal/moral sparring match that ensues is often funny but ultimately annoying. The whole exercise ends in the lamest of pay-offs, but for the viewer, thankfully, the buck, quite literally, doesn’t stop here.

Chapter three, “The Beggar, the Kleptomaniac and the Swindler”, owes more to Rohmer’s “proverbs” than his “comedies”. While it is funny in places, the issues at hand relate more to the problems and moral dilemmas related to capitalism than anything else. Reinette is berated by Mirabelle for giving charity to a street beggar, which is soon subverted when Mirabelle aids a shoplifter and uses the “rewards” as a birthday gift for Reinette. A signature dialogue-based sparring match ensues, loaded with all the passionate, expressive, philosophical and moralistic mediations on life that one expects in a Rohmer film. Ultimately, it pushes the over-expressive Reinette into a double-doublecross that leaves her hilariously at the end of her tether.

By the final chapter, “Selling the Picture”, the pieces of each preceding “adventure” start to fall into place. Reinette finds herself at a crossroads. Her rent is overdue and her artistic career is going nowhere. She decides to make a vow of silence with Mirabelle, letting her more experienced and street-aware friend do the bargaining for her, as they valiantly try to sell (express?) her work to a fickle art scene. The problems of “expression” are hilariously on display here, both via the actions of the artist and the shonky and self-righteous reactions of the wicked art dealer. That the film delivers a Marxist salute and a Marx Brothers-like wink in the hilarious one-two-sucker-punch finale is indicative of Rohmer’s effusive appeal and his deft artistic hand – he can make the banal and ridiculous satisfyingly sublime.