Born December 30, 1906 in London, British director Sir Carol Reed was the second son of the actor Sir Herbert Beerbohm Tree and his mistress May Pinney. Following a public school education, Reed made his theatrical debut in 1924. He joined Edgar Wallace’s troupe and acted in several plays, later overseeing film adaptations of Wallace’s plays by Basil Dean’s Associated Talking Pictures. (1) Between 1932 and 1934, Reed worked for Associated Talking Pictures, first as a dialogue director, then later as a second-unit director and an assistant director. (2) With Robert Wyler, he co-directed It Happened in Paris (1935), a comedy based on a French play. Reed’s directorial debut came with Midshipman Easy (1935), a historical romance that marked his first foray into novel-to-film adaptations.

Collaboration marks Reed’s most successful films as he himself claimed. (3) He worked not only with the same writers (Kimmins, Eric Ambler, Graham Greene) but often with the same art directors (Victor Korda, Vetchinsky), cinematographer (Robert Krasker) and editor (R.E. Dearing). Reed served as his own producer during the 1940s and 1950s, only relinquishing control after the flop, The Agony and the Ecstasy, in 1965.

The British film industry served up a steady diet of literary adaptations during the 1930s and 1940s, particularly during the post-war World War II era. F.L. Green’s Odd Man Out provided Reed with a hit in 1946. Graham Greene scripted two hits for Reed during this period, The Fallen Idol (1948) and The Third Man (1949). Of Reed’s 31 films, fifteen were based on novels, four based on plays, and three on stories. Reed himself earned writing credit for one film, Talk of the Devil, and added much to Graham Greene’s original story idea for The Third Man. Less successful adaptations include Outcasts of the Islands (1952), A Kid for Two Farthings (1955), Trapeze (1956) and The Agony and the Ecstasy . 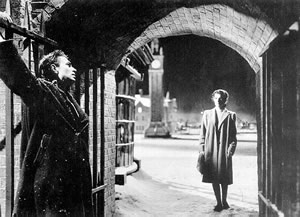 Reed’s first successes were followed by the uneven comedies, Who’s Your Lady Friend (1937), Penny Paradise (1938) and A Girl Must Live (1939). Reed’s 1938 Bank Holiday has more in common with Edmund Goulding’s Grand Hotel (1932) than with Reed’s other films. (4) Shot on location, Bank Holiday follows the doings of various working-class Londoners as they enjoy a weekend at the seaside resort, The Grand. Bank Holiday, with its episodic nature, irony, sociological subplots, and contrasting characters (young lovers, a family, single woman, retired man), established a British film staple. (5) Robert Moss regards this film as remarkable for its atmosphere, created by long shots of the seaside resort, quick cuts and juxtaposition. (6) Throughout the 1940s Reed used these techniques skillfully to produce both dark thrillers and riveting documentaries.

Reed remained in Britain during World War II, joining the British film unit of the War Office. (7) He scored both critically and popularly with The Stars Look Down (1940) and Night Train to Munich (1941). Stars was the second Cronin novel that Reed brought to the screen. This coal-mining tale, replete with class struggle, treachery and a love triangle, gave Reed a chance to employ a documentary look and feel in a big-budget feature film. (8) Night Train, scripted by the same authors as Hitchcock’s The Lady Vanishes (1938), tested Reed’s skill at controlling melodrama with comedic episodes and speeding the action along with wit.

These films were followed by a biographical fiction, Kipps (1941), based on an H. G. Wells novel, and The Young Mr. Pitt (1942), staring Robert Donat. Reed became known for films of great style, strange shadows and allegorical locations involving single individuals facing a bewildering world. Both films present men surmounting odds. Kipps raises himself from a draper’s life after receiving a legacy. Mr. Pitt distinguishes himself as Prime Minister against great odds, including his own youth. Pitt also offered British audience heroics and political parallels between the Napoleonic era and contemporary Britain.

Reed’s wartime effort, The New Lot (1942, later released publicly as The Way Ahead [1944]) took the documentary style to new heights, “sparing no sentiment at the end as the entire squad goes into battle and death.” (9) An Anglo-American film, The True Glory (1945), compiled by Reed and American playwright, Garson Kanin, from ten million feet of film (10) of the invasion of Europe from D-Day to the war’s end, added to Reed’s reputation of superbly edited features. (11) 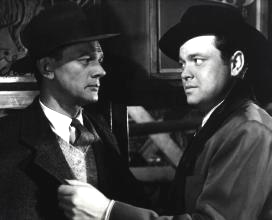 The post-war period brought Reed international acclaim for three films whose subject matter displayed the dilemmas of orphans and outcasts. Reed won the British film of the year (awarded by the British Film Academy, now known as BAFTA) three times for Odd Man Out (1947), The Fallen Idol (1948) and The Third Man (1949). Like his compatriot Alfred Hitchcock, Reed turned popular fiction into smart thrillers. Reed adds twists to this plot structure, including bleak settings, post-war angst, and ruined aristocrats. In Reed’s films, the innocent are more naive than noble, the real villains are smarter and more charming than the hero, and the hero commits the very act he has been trying to prevent. In Odd Man Out, the wounded Irish gangster is killed as his girlfriend attempts to rescue him. In The Fallen Idol, a lonely ambassador’s son almost causes his beloved servant, Baines, to be arrest for the murder of Baines’ wife based on the lies a child tells in an attempt to save the man. In The Third Man, the lonely, displaced and foolish Holly Martin (Joseph Cotten) kills the very man he seeks, his friend Harry Lime (Orson Welles), after a pursuit through the Viennese sewers. George Perry describes the basic Hitchcockian plot as “the double chase, with innocent hero, searching for the real villain, pursued by the law.” (12) But other plot complications and daring camerawork stamped the film as Reed’s masterpiece.

Carol Reed won the Cannes Film Grand Prix in 1949 for this 104 minute black and white film noir. The Third Man stunned audiences with its raw vision of the bombed out Vienna, its mysterious main character, Harry Lime, Lime’s loyal lover, Anna (Alida Valli), his foolish American friend, Holly, the post-war powersharing by the allies, and the desperate chase in Vienna’s cavernous sewers. Often criticized for its melodrama and cynicism, Graham Greene’s story can be described as:

Vienna is seen by day and night as Holly, an American pulp writer searches for clues to the death of his friend, Harry Lime. He [Holly] is unable to find the third witness to the death, and eventually learns that the third man was Lime – who had another man killed in his place, and is alive and flourishing as a black marketeer. After many twists of plot, Holly kills Lime. (13)

Yet the film’s eerie Dutch tilts camera work produced the necessary tension and irony of the tale, as it had in Welles’ Citizen Kane (1941). (14) The daylight scenes are as dark as the nighttime scenes. Only the visit to Harry Lime’s opulent apartment has an unshadowed feel, though the severely angled shots through the apartment’s doors reinforce the landlord’s anxiety about Holly’s and Anna’s visit there. Adding to the film’s disquietude are those scenes in which the German dialogue (Lime’s landlord, the landlord’s son, and Anna’s landlady) is left untranslated. As in a silent film, gesture (child pointing, landlady clutching her shawl) substitutes inadequately, leaving the protagonist and the audience helpless, confused, threatened and disbelieving, unable to trust anyone. Haunting, gritty zither music, originally recorded underneath a table in Reed’s hotel room in Vienna, (15) adds to the uneasiness of every scene. Surprised bits of humor (Anna’s cat’s rejection of Martin, a balloon seller upsetting a stakeout) draw the audience into the action and speed the film to its grim conclusion. 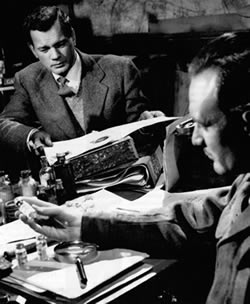 Carol Reed filmed The Third Man‘s sewer chase scenes in both Vienna, with the assistant director sometimes doubling for Welles, and in London, on the Shepperton lot, Welles attempting to double for Reed, giving Robert Krasker shooting directions and running one sequence numerous times. (16) Four different cameramen shot scenes in the town and in the sewers, morning, noon and night, under the influence of Benzedrine. (17) Reportedly, Carol Reed did not use any of the footage directed by Welles, (18) and presumably that footage was carefully and subsequently lost.

Reed worked with cinematographer Robert Krasker, author Graham Greene and Sir Alexander Korda to produce this signature work. In turn, The Third Man radiated success on all its participants, due to its unique atmosphere, music, cast, camerawork, and unhappy ending. Krasker won an Academy award for his work on the film. The zither player, Anton Karas, was nominated for an academy award. His composition for the film became a hit record and brought him fame and fortune. Greene issued the story as a book. Later, in 1951, Orson Welles wrote and performed episodes of a radio series, The Lives of Harry Lime, playing upon the success of The Third Man and feeding the myth of his importance to the film’s success. (19) Though Orson Welles starred in less than half of the film, he has often received credit for its style, its chase scenes (completed on specially built stages in England), and the eerie, politically-cynical dialogue as he and Joseph Cotton face each other inside the Ferris wheel.

American audiences saw a significantly shorter film (93 minutes), recut by producer David O. Selznick in response to a 1949 New Rochelle preview (20) and his personal concerns. Selznick feared three things: one, American audiences would not accept a weak, easily duped American, played by Joseph Cotten; two, that censors would never accept nudity, violence on screen (“law-enforcing officers dying at the hands of criminals”) (21) and drunkenness of the hero (Cotten); and three, that Americans might find Lime’s dialogue more like Communist propaganda:

Nobody thinks in terms of human beings. Government’s don’t, so why should we? They talk about the people and the proletariat, I talk about the suckers and the mugs. It’s the same thing. They have their five year plans and so have I. (22)

Though Selznick did not cut this speech nor Welles’ “cuckoo clock” speech, he did radically alter the opening narrative delivered by Reed, rewriting the speech to highlight Cotten’s role as narrator and hero of the story.

Anyway, I was dead broke when I got to Vienna. A close pal of mine had wired me offering me a job doing publicity work for some king of charity he was running. I’m a writer, name’s Martins, Holly Martins. Anyway down I came all the way to old Vienna happy as a lark and without a dime. (23)

Other changes, including radical edits of the railway cafe conversation between Holly and Anna, resulted in continuity problems about which Selznick remained unconcerned. The Third Man also generated imitations, one by Reed himself, The Man Between (1953), shot this time in post-war Berlin.

Reed made masterpieces, successes, and flops during his career (1935-1971). Though Carol Reed would hardly be labeled a political theorist, his films Odd Man Out, Fallen Idol, The Third Man, Outcasts of the Island, The Man Between and Our Man in Havana (1959), all contained questionable lead characters making selfish choices for political ends.

Reed won the Grand Prix at Cannes for The Third Man in 1949 and, much later, two Academy awards (Best Picture and Best Director) for Oliver! (1968). The Festival Internacional de Cine de San Sebastián honored Reed with a retrospective in 2000.

Reed was knighted in 1952 for his considerable contributions to British filmmaking. His last two films, The Last Warrior (1970) and Follow Me (1971), made for American studios, did not add to Reed’s reputation. Reed died April 25, 1976, and was survived by his second wife, Penelope Dudley Ward, and their son Max and his step-daughter Tracy Pelissier. 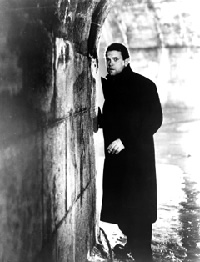 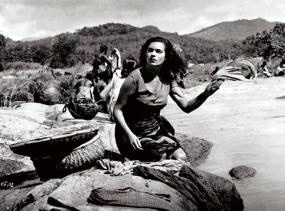 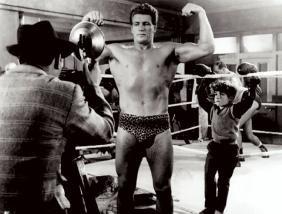 Britmovie
Contains brief biography and plot synopsis for each film.

Film Directors: Articles on the Internet
Several online articles can be found here.

Guardian Unlimited Film
An article on The Third Man.