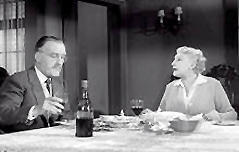 Partial synopsis: An English couple, Herbert and Hermione Carpenter, are about to visit America for an indefinite period, though the domineering Hermione is determined to be “back for Christmas”. On the afternoon of their intended departure they entertain a group of friends at home. (The Wallingfords, though, can’t make it.) Once the guests have left, Herbert kills his wife and buries her in the cellar. While he is thus engaged, the Wallingfords arrive in the front hallway. But eventually they depart, suspecting nothing. Herbert heads for California…

English poet and author, John Collier (1901-80), wrote occasional screenplays such as Sylvia Scarlett (1935), but is best known for his outrageous and macabre stories much admired by fellow practitioner Roald Dahl. Alfred Hitchcock must have appreciated the stories too, for he personally directed both “Back for Christmas” and “Wet Saturday” (both starring John Williams) for Alfred Hitchcock Presents. “Back for Christmas” was originally published in the New Yorker in 1939 (2).

The story of “Back for Christmas”, like Hitchcock’s feature Rear Window (1954), owes something to the real-life case of henpecked Major Armstrong from the picturesque town of Hay-on-Wye in Wales. You can also detect the influence of the Crippen and Mahon cases (again as in Rear Window). But for his TV production, Hitchcock chose to de-emphasise the more gruesome aspects of the story, for example, by changing the occupation of Herbert from doctor to metallurgist. Thus we are spared reference to him dismembering poor Hermione – it simply doesn’t happen – or such a passage as this (which I quote to give a flavour of what Collier offers, and a sample of his writerly skill):

He crossed the hall, sprang the latch of the front door, went upstairs, and taking his instruments from the wash-basin, finished what he had to do. He came down again, clad in his bath-gown, carrying parcel after parcel of towelling or newspaper neatly secured with safety-pins. These he packed carefully into the narrow, deep hole he had made in the corner of the cellar…

That Herbert in Hitchcock’s program has sinister business in the cellar is made apparent at the outset when we first hear the tell-tale sound of digging and then the camera pans to show the long rectangular excavation Herbert is finishing – ostensibly for the purpose of laying down bottles of wine. (The touch of hearing him digging before we see him may be inspired by a moment in Hitchcock’s Stage Fright [1950] where we hear Marlene Dietrich’s voice asking dramatically, “Say that you love me”, an instant before we first see her.) And just who will shortly occupy the excavated space is made clear when Herbert summons Hermione downstairs to give her opinion of his handiwork. A marvellous close-up of him hunched under the ceiling beside the gaping hole says everything needful, especially when we follow his slow eye movement in a subjective shot measuring Hermione for fit.

Generally, Hitchcock has stuck fairly closely to Collier’s story. I’ll mention in a moment instances of where he has built up scenes for his actors. There’s an exemplary alternation of these relatively immobile set pieces and fast, fluid camera movement linking them (or tightening the shot as a scene gets under way). Long-shots and close-ups are both also thoughtfully applied.

I’d like to comment on one particular passage – namely, the moment after the murder when the Wallingfords come calling and Herbert is trapped, a trembling jelly, under the staircase with the sound of water running in the bath upstairs. (He has just been down to turn the water back on at the main.) In the story the moment is suspenseful enough, and is artfully protracted by the Wallingfords’ dialogue about whether they should shout out to attract attention or tactfully come back later – dialogue which the TV program reproduces almost verbatim. Nonetheless, a glance down the page tells the reader that Herbert will soon be off the hook again, whereas the viewer has no way of knowing how long the suspense will last and what the outcome will be. In other words, TV is able to play the scene for pure suspense (the camera doesn’t move until almost the end of the scene, the divided frame anticipating a masterful moment from Hitchcock’s Marnie [1964]), whereas Collier’s story is here also introducing an intellectual element, albeit a red herring – are we being given a clue as to what may eventually trip the murderer up, or to what the story is otherwise about? It’s no more than a difference in emphasis between the two media but, in its way, perhaps worth noting …

Herbert’s motivation for doing away with Hermione is her damned over-efficiency and bossiness – though in the story it’s indicated as well that he has a mistress waiting to join him (again cf. Rear Window). During the scene with the Carpenters’ friends, the program includes this dialogue:

Wife: Hermione arranged things beautifully. Don’t you wish I were like that?

Husband: No, not really!

Herbert is standing at the fireplace, impeccably dressed as ever in jacket, waistcoat and tie, and his just-perceptible reaction to the husband’s remark is caught in close-up. In casting John Williams, easily Hitchcock’s favourite actor in his TV shows (3), as Herbert, the director has chosen to give a fairly minimalist presentation of Collier’s story, itself “without a wasted word” as one editor describes it (4). But he suitably allows veteran actress Isabel Elsom (the innkeeper in his film The Paradine Case [1947]) a scene to dominate when Hermione summons Herbert to help her put dust-covers on the ceiling lamps.

Only in the program’s final moments do we see Herbert start to relax. A superimposition shows him “doing” New York – a dapper figure gazing up at the buildings – and some “go-getting” American music cueing us to his new-found sense of freedom. Then he’s in a touring car, crossing the country, munching on a hot-dog and with his jacket off at last. Already he’s anticipating sunny California and the new job we learn is waiting for him there. Pity about a certain ironic matter he’s overlooked…