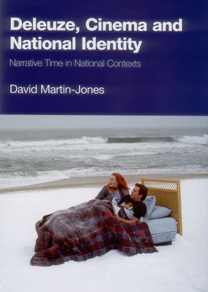 CLEMENTINE KRUCZYNSKI [Kate Winslet]: You’re not a stalker or anything, right?

JOEL BARISH [Jim Carrey]: I’m not a stalker. You’re the one that talked to me, remember?

CLEMENTINE: That is the oldest trick in the stalker book.

JOEL: Really? There’s a stalker book? Great, I gotta read that one.

Erasure, bereavement, memory loss, mistaken identity, amnesia, false reconstruction, renegotiation, damage, infantalisation, paths of destiny not taken… these are just a few of the corralling states of being that author David Martin-Jones deploys to invoke the states of national identity configured in the contemporary films he examines in his book. Discussing the vexed issue of nationalism in any sense is a difficult endeavour, one that is necessarily highly charged with politically infused emotion. Martin-Jones’ engagement of a Deleuzean method for discussion of the films at hand is thus appropriate, as Gilles Deleuze’s approach to the cinema is not to give a prescriptive account of what films are “about”; instead, Deleuze provides an aesthetic of the cinema that engenders a political discourse produced by the cinema. For Deleuze, the cinema makes the complex relationships between things visible, and in doing so, the cinema alters our knowledge of our notions of time and space. Further, Deleuze equally advocates the abstraction of concepts in order to fully access their material processes, systemic affinities, and procedures, whereby the macroscoping of content and its expression (say in the case of the cinema) enables a close focus, a microscoping of those material aspects. Deleuze’s philosophy can be characterised by this dyadic approach to the consideration of things – his work continually looking at both ends of the scale of things (the movement and time of the moving image, for example) – to articulate a synthesis of production as a multiple occupancy of time. In his film analysis, Martin-Jones engages Deleuze’s ciné-philosophy for the purposes of thinking of the national as a category that is infused with a problematic temporality – an historically constructed time – as the starting point for his own investigation of national identities and the states of “narrative time” in “national cinemas”. Although I don’t agree with a number of Martin-Jones’ statements regarding Deleuze’s intended meaning in his cinema books (Martin-Jones reads the movement-image and the time-image as separate entities), his logic is apposite for his stated task: to “provide a range of new contexts within which to apply [Deleuze’s] terms” (p. 2) (1). And in this endeavour, Martin-Jones’ book provides a very useful historical account of a series of specific cultural narratives of identities that are posited as “disrupted, multiple, jumbled, or reversed” (p. 5) by their filmic narrative construction – which Martin-Jones reads as indicative of the period roughly five years either side of the year 2000. This period has given us a distinctive set of films, “time-images” of national identity – images of the processes of the “huge forces of disintegration”, thus becoming part of that cinematic history that includes the time-styles of Roberto Rossellini, Jacques Rivette, Yasujiro Ozu, and Jean-Luc Godard; points where the cinema, as Deleuze writes, “becomes completely political” (2). From this vantage point, Martin-Jones gives us not another book on “how to define a national cinema” (p. 11); rather, he writes something far more useful, by exploring the construction of national identity through popular narrative cinemas.

The book provides a very succinct introduction to Deleuze’s Bergsonian-influenced notion of how the thicknesses of memory operate and are manipulated through the imagery of the cinema to produce certain types of “time-images”. (Sound is little discussed.) Martin-Jones also usefully situates Homi Bhabha’s important discussion on the temporal narration of the nation, via Judith Butler’s notion of the performativity of subjectivity, alongside a Deleuze-Guattarian notion of the de- and re-territorialisation of national identity through the mediations of temporalised, national discourses (3).

Martin-Jones says his project is to examine “exactly how formally disruptive films narrate the nation” (p. 11). By “formally disruptive”, he means narrative films that are not following an Aristotelian linear narrative in their telling; rather, their narration may be obviously out of order – as in the case of Irréversible (Gaspar Noé, 2002); or configured as contemporary Noir films – Bakha satang (Peppermint Candy, Lee Chang-dong, 2000), Memento (Christopher Nolan, 2000); or that branch of noir/romance films such as Eternal Sunshine of the Spotless Mind; or those films that engage flashbacks – Saving Private Ryan (Steven Spielberg, 1998); or the use of multiple narrative endings – Lola rennt (Run Lola Run, Tom Tykwer, 1998) or DVD extra “Director’s” alternate endings. Martin-Jones argues that such films engaging in fractured narrative techniques serve to emphasise the splintered and confused configurations of identity and recollection of identity that one finds expressed in films produced in the historical time period of the late 1990s to 2004. Films such as Eternal Sunshine of the Spotless Mind, says Martin-Jones, can be read as engaging in “smuggl[ing] in a political critique of the amnesiac state of post-9/11 America and the cinema’s role in constructing it” (p. 176). In support of his argument here, Martin-Jones draws on film theorist Douglas Kellner’s research on the sentiments of fear and the hysterical and ahistorical nationalist surges resulting from the Persian Gulf Wars (1990-1991; 2003-ongoing) and the events of September 11 (4).

To situate these comments together with the Deleuzean theory employed, one must turn back to Martin-Jones’ chapter 2 on “Memory” for further explication of the thinking of time. On the subject of how a national cinema is manipulative of modes of subjective time, one can fruitfully turn to Deleuze himself to consider the ramifications of Martin-Jones’ assertions more fully. For example, in his conclusion to his two cinema books, Deleuze spends some time discussing the specificity of the “power” of cinema and its ability to enact a “psychomechanics” – a logic of change of the qualities of things (inclusive of living and inanimate things) at the psychological level, but most profoundly at the level of thought (5). Deleuze’s example of this type of powerful change is of a “national cinema”, that of the German cinema of the 20th century, which he says “summoned up primitive powers, but it was perhaps best placed to announce something new which was to change cinema, horribly to ‘realize’ it and thus to modify its basic themes” (6). And this is one of Deleuze’s central theses concerning the cinema – that when we think of the movement of “the moving image”, we must also consider the movement of thought itself, in the neurological sense. Film has the capacity to alter thought, through its manipulation of thought-processes. In turn, this movement affects time-images. Deleuze’s example here is of the work of German filmmaker Hans-Jürgen Syberberg, director of Hitler: ein Film aus Deutschland (1978) (7). Deleuze discusses the complexities of how Syberberg reveals “Hitler” as an entity – in all senses of the word – and how this has irrevocably altered how we see images of nationalist pride on screen. Similarly, earlier in Cinema 2, Deleuze addresses Alain Resnais’ film about the extremities of human psychology and behaviour in the Nazi concentration camps, Nuit et brouillard (Night and Fog, 1955). Here Deleuze discusses how Resnais had succeeded in revealing the “mental functions” that worked to organise those camps (8). The work of “national cinemas”, as we refer to them today, is at such levels of neurological constitution. It is to their morphological formation that we should be attentive.

There are many interesting discussion points Martin-Jones takes up in his book, which I cannot do justice to here. He makes some useful comments, for instance, on the Bodies of Hollywood Actors, such as Tom Cruise and Gwyneth Paltrow; he considers how their action-bodies come to serve as stabilising mechanisms, becoming corporeal narrators for what is otherwise disjointed and implausible Hollywood entertainment. In his conclusion, Martin-Jones only goes so far as to state that such narratives constitute a particular “genre” that emerged in the late 1990s as a “global” movement – that is, European, North American, and “Asian” (by which he means Eastern Asian, referring to examples from South Korea, Japan and Hong Kong cinemas, but none from south-eastern, south-central, or central Asian cinemas) – where the movement-image reterritorrialises the time-image and is thereby productive of “the construction or reconstruction of national identity” (p. 222).

What is far more interesting for this reviewer is how the films that Martin-Jones has chosen to address are expressive of states of lost minds, lost selves, disrupted, and disintegrated lives. Given Martin-Jones’ reiteration of the themes of amnesia, loss and individual identity struggle throughout his text, I expected some address of the Spinozist politics of affect or comment regarding the spiritually affective dimensions of a Bergsonian inspired ciné-memory that Deleuze engages in his cinema books, but this is not Martin-Jones’ project here. Instead, what his book ably demonstrates is how we can pose extremely topical questions through Deleuze’s philosophy to examine all manner of situations and conditions. For example, the question of the often contradictory nature of nationalism’s “humanism”: how can nations be so nurturing, so protective of their “own” peoples, and behave so barbarically towards those that don’t hold the same papers of nationalism, or share the same ethnic physical characteristics? This text provides some very thought-provoking examples of how these questions may begin to be addressed, by considering the vital role of memory in the screen’s constitution of identity as an often insidious nationalism, lying in wait for its prey.