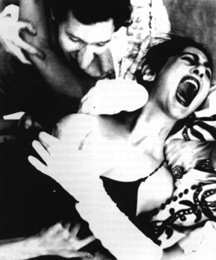 By all accounts, Jack Smith was one of the most volatile, exhausting and creative of the original members of the New American Cinema group of the early 1960s. Best known for his controversial featurette Flaming Creatures (1963), Smith devoted his life not only to filmmaking but to acting, writing, photography and performance art.

As an actor, Smith first emerged in the underground film work of Ken Jacobs, appearing initially in films like Saturday Afternoon Blood Sacrifice (1957) and Little Cobra Dance (1957), and later in Little Stabs of Happiness (1958–63) and the remarkable Blonde Cobra (1959–63). As a filmmaker, Smith’s first offering was Scotch Tape (1959), a single hundred-foot roll of Kodachrome film made with a camera borrowed from Jacobs. Later films included Overstimulated (1960), Normal Love (c.1963) and No President (c.1968), but the film that established Smith’s underground following was Flaming Creatures. Shot on the roof of the (now demolished) Windsor Theatre in New York in the summer of 1962 in bright sunlight and on outdated black and white reversal film stock, the picture has a timeless, placeless, ephemeral beauty. In 1963 Film Culture awarded Flaming Creatures its Fifth Independent Film Award, its editorial (written by Jonas Mekas, founder of New York’s Anthology Film Archives) stating that:

In Flaming Creatures Smith has graced the anarchic liberation of new American cinema with graphic and rhythmic power worthy of the best of formal cinema. He has attained for the first time in motion pictures a high level of art which is absolutely lacking in decorum; and a treatment of sex which makes us aware of the restraint of all previous film-makers. (1)

Between 1962 and 1964, Film Culture published a number of Smith’s essays, including his aesthetic manifesto “The Perfect Filmic Appositeness of Maria Montez.” (2) Written while Smith was shooting Flaming Creatures, this piece of writing revealed Smith to be a film cultist. Smith endorsed a realm of “secret flix” ranging from B-grade horror movies to Maureen O’Hara Spanish Galleon “flix,” from Busby Berkeley musicals to Dorothy Lamour sarong “flix.” In addition to this, Smith singled out for valorisation Universal Pictures’ “Queen of Technicolor,” Maria Montez, star of exotic adventure films such as Arabian Nights (1942), Ali Baba and the Forty Thieves (1944), and Cobra Woman (1944). According to writer Ronald Tavel, Smith, while working as an usher at Chicago’s Orpheum Theater in 1951, was introduced to the films of Maria Montez when news of her untimely death inspired a retrospective: “It was then and there [that Smith] became familiar with the star whom he has since referred to as The Wonderful One or The Marvelous One. He felt that all the secrets of the cinema lay in careful study of [that] woman.” (3) Montez embodied for Smith the ‘magic’ of the movies and his film and later theatre work is filled with references to specific Montez pictures, and to Hollywood exotica more generally.

Inspired by the images of Montez’s films, Flaming Creatures eschews conventional narrative to depict a pantheon of gorgeous and ambiguously gendered ‘creatures’ in a loosely connected series of tableaux set to an inspired collage of scratchy recordings. Shown privately during the early months of 1963, Flaming Creatures was also praised by Mekas in his “Movie Journal” column for The Village Voice:

Jack Smith has just finished a great movie … and it is so beautiful I feel ashamed to sit through the current Hollywood and European movies…. The film will not be shown theatrically because our social-moral-etc. guides are sick. This movie will be called pornographic, degenerate, homosexual, trite, disgusting, etc. It is all that and it is so much more than that. (4)

Mekas’ review anticipated the scandal that would be produced by Flaming Creatures. In March 1964, the film was seized by the district attorney’s office and was subsequently banned in the state of New York. The prosecution of Flaming Creatures prompted the film’s champions – notably Mekas and Susan Sontag – to mount a high cultural defense of it, attempting to legitimate its sexuality by framing it within discourses of censorship and high art. (5) Years later, in his 1978 Semiotext(e) interview, Smith complained that these identifications of Flaming Creatures merely served to limit its potentiality; “the first audiences were laughing all the way through. But then that writing started – and it became a sex thing … [and] there was dead silence in the auditorium.” (6)

Recent sub-cultural interpretations locate the film’s potentiality in its conceptual elusiveness, in its refusal of fixed categories of knowledge: “[Flaming Creatures’] strategic disruption of gender and sexual norms [is] ultimately an attempt at expressing the possibilities of an eroticism that is always beyond the reach of [identity and] representation.” (7) Rather than propose a stable, gay sexuality as a precondition for (pre-Stonewall) activism, these critics argue that Flaming Creatures puts forward a non-essentialist conception of gayness, one in which there is “no subjective essence to be realized, no interiority where the self’s truth lies dormant.” (8) Rather than legitimate Smith’s work solely on aesthetic grounds, these later critics see its political dimension, recognising in Smith’s self-consciously trashy artifice, in his performance, “the possibility for creating a more fabulous, a more livable reality.” (9) J. Hoberman, Flaming Creatures‘ greatest champion, perhaps best sums up the film’s indeterminability and its place in film history:

At once primitive and sophisticated, hilarious and poignant, spontaneous and studied, frenzied and languid, crude and delicate, avant and nostalgic, gritty and fanciful, fresh and faded, innocent and jaded, high and low, raw and cooked, underground and camp, black and white and white on white, composed and decomposed, richly perverse and gloriously impoverished, Flaming Creatures was something new. Had Jack Smith produced nothing other than this amazing artifice, he would still rank among the great visionaries of American film. (10)