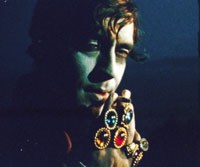 On March 18 2002, legendary Italian theatre director, actor and writer Carmelo Bene died at age 64. Between 1968 and 1973 he also made films, five experimental works that marked him as the wildest of Italian cinema’s several wild geniuses. When asked why he gave up filmmaking he replied, “To relax. The way I make cinema is extremely exhausting.” (1) This statement evokes not only the production circumstances of his movies, on which he worked outside the structures of commercial filmmaking as writer, producer, director, actor and decorator, but also the intense energy which animates every scene of his oeuvre. This energy emanates from the cartoonish dementia of the performances, the disorientating speed with which one phantasmagoric image replaces another and the jarringly non-naturalistic use of sound and music. No director has ever come closer to the heightened expressive freedom of animation in live action cinema than Bene.

By the time he made his first film, Bene had been a prominent figure in Italian experimental theatre for a decade. He was born in Campi Salentina near Lecce in 1937. After a brief stint in Rome’s National Academy of Dramatic Art he formed his own theatre company. A staging of his adaptation of Camus’ Caligula in 1959 had first brought him notice. His subsequent career earned him the reputation of being a provocateur, with the police closing down several of his productions, notably Christ 63 in 1963. His work also drew much acclaim, with Pasolini hailing Bene’s “autonomous and original” (2) theater as the only exciting work being done in an otherwise worthless experimental theatre scene. Bene played Creon in Pasolini’s Oedipus Rex (Edipo Re, 1967).

His first film, Our Lady of the Turks (Nostra Signora dei Turchi, 1968), is a fragmented series of scenes centred around the cathedral at Otranto in which the protagonist (Bene) tries repeatedly but unsuccessfully to meet Saint Margherita. It was adapted from Bene’s own 1965 novel. His second film, Capricci (1969), works with ideas from Manon and the Elizabethan play Arden of Faversham. The third, Don Giovanni (1971), is taken from a story by 19th century author and dandy Jules Barbey D’Aurevilly, Le plus bel amour de Don Juan, and Salome (1972) is a version of Oscar Wilde’s play. The brilliantly titled One Hamlet Less (Un Amleto di meno, 1973) combines Shakespeare with Jules Laforgue.

Bene’s films are critical explorations of the texts they are based on. He operates by returning these stories to a sort of primordial dramatic and intellectual state of chaos where ideas, narratives and characters struggle to come into being. As Deleuze pointed out (3), Bene is concerned not with beginnings or endings, but with the middle, an engagement with a perpetual becoming, a world of constantly shifting potentiality. He achieves this by questioning and throwing off balance every aspect of his films. The frequently hysterical performances of his actors – or ‘actorial machines’ – are caricatures amplified to the level of the grotesque. Rather than playing characters, the actors become stylised embodiments of some of their defining characteristics, shrieking, slobbering, whispering and drooling their way through a series of events that resemble variations on certain themes or gestures rather than a developing narrative. Bene described his films as “music for the eyes” (4) put together with a “surgical indiscipline of montage” (5). He constantly strives for a glorious visual excessiveness, with unusual camera angles, shifts between black and white and colour, interesting superimpositions and either overtly theatrical – Don Giovanni, One Hamlet Less – or otherwise expressionistically employed settings – the cathedral in Our Lady of the Turks. This anti-naturalistic approach is further heightened by the asynchronous use of sound, which incorporates heavily amplified sounds such as breathing and coughing, shouted or stammered dialogue and sudden bursts of mainly classical music, most commonly opera.

If Bene’s cinema is one of constant becoming, of repetition and incompletion, perhaps the most common recurring theme in his scenes is frustration. Frustrated desire is the key element in the stories of Salome and Don Giovanni and all of his films feature memorable images of frustration – victims of a car crash returning to life in order to crash again but with their corpses in more deathlike positions in Capricci; a man in armour attempting to have sex with a woman in Our Lady of the Turks; Don Giovanni repeatedly trying and failing to put down his tea cup in Don Giovanni; a follower of Christ attempting to nail himself to the cross in Salomè only to discover he cannot nail his last hand down.

After these five exhilarating films, Bene returned to the theatre and writing. Although his later life was dogged by ill health, his work continued to receive attention and acclaim. Yet the films that comprise his self described “cinematic parenthesis” are seldom screened or written about, especially in the English-speaking world. For a director whose work matches the visual power and representational complexity of Kenneth Anger or Derek Jarman’s best work, this a particularly unfortunate oversight.

Thanks to Fergus Daly and Tony McKibbin for help with research (and to Fergus for introducing me to Bene’s films in the first place!)

The main reference for this obituary was the Cineaction article Contesting Cinema: A Carmelo Bene Project by Marc Siegel.