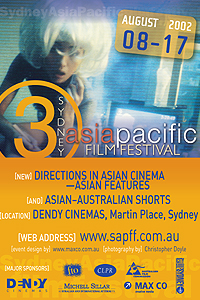 Senses of Cinema is growing and changing. Our philosophy of cinema remains the same: to stay outside the mainstream system of distribution and promotion that rules public film culture, and to champion what is innovative, challenging, personal and under-recognised in the art of cinema. With all the usual provisos, of course – that we seek to find art in entertainment and exploitation and underground cinema, not just at the market’s designated ‘art houses’; and that a fierce love of cinema often entails just as fierce a critique of it.

In recent months, Senses of Cinema has undergone an internal re-organisation. The new format began in our last issue. There are now three sections, each with their own Editor.

The General section – which comprises the coverage of Australian cinema, spotlights on directors, genres and national cinemas, Film Festival reports, film and book reviews, and film criticism itself – is edited by Fiona A. Villella.

The Special Dossiers are edited by Adrian Martin. This new feature began in the last issue with the “Festschrift for Raymond Durgnat”. It continues in this issue with a focus on “Performance”, and in the next issue – our special Women’s Cinema issue – with a tribute to the legacy of actor-writer-filmmaker Zoë Lund. The aim of the Special Dossiers is to offer a sustained, ‘curated’ focus on a single topic.

The Great Directors database, which also began in the previous issue, is edited by Bill Mousoulis. This section offers introductory, career-survey essays on a vast range of auteurs. Over time, we hope it will grow into a major, Internet-based reference-text.

There is a whole, collective team that puts Senses of Cinema together. Apart from the Editors, there are the Editorial Assistants, Mairead Philips (General section), Grant McDonald (Special Dossiers) and Michelle Carey (Great Directors). Albert Fung handles the Links page. Presiding over Web design and maintenance for the publication is Chris Howard. We also welcome, with this issue, our newly appointed Manager, Jan Chandler. And we will soon have a Board in place to further oversee the operations of the magazine.

In this issue, Senses continues to explore the changing maps of a newly-defined ‘world cinema’. German cinema is highlighted through discussions of Romuald Karmaker, Valeska Grisebach, and most prominently Harun Farocki. The Farocki focus comprises an ensemble of articles presented by Thomas Elsaesser, as a preview of his forthcoming book on this too-often overlooked master of radical cinema (locally – here in Melbourne, Australia – this focus coincides with screening of Farocki’s recent video works at the Melbourne Underground Film Festival). Paraguay, too, is canvassed in the interview with, and article by, Hugo Gamarra Echeverry.

From Paraguay to Australia: the importance of film festivals in enriching one’s knowledge and appreciation of cinema cannot be underestimated. And a good deal of the coverage in this issue – from the Joseph Losey spotlight to contemporary Iranian cinema to avant-garde cinema – ties in with program material screening at several local film festivals.

‘Film culture’ is, in Australia and perhaps elsewhere, a frequently misused and abused term. A recent book, the independently published Straight Roads and Crossed Lines: The Quest for Film Culture in Australia? by Barrett Hodsdon, follows the question mark at the end of its title all the way to a pessimistic conclusion, making it one of the most extensive and pointed critiques of any national cinema ever published. Several observers and participants in Australian film culture respond to Barrett’s book and raise important issues relating to the past, present and future of local film culture.

Where much talk of film culture necessarily targets the social conditions enabled (and disabled) by government, institutions, big business, etc, an older tradition in film criticism takes a step away from this ‘materialist’ fray, to revel in the visions of special auteurs. Although it is often said that no one believes anymore in the aura of ‘the artist’, the response to our call for contributions to the Great Directors project has been overwhelming. Naturally, we mean ‘great’ here in an open-ended, not rigidly canonical sense. We are interested in not just those directors who are long venerated – although there is no lack of passionate support for figures such as Robert Bresson, judging from the entries so far – but, equally, the major figures (criminally little-known as they may be) in any sector or mode or geographical region of cinema: animation (Chuck Jones), independent (Todd Haynes), film-essay (Chris Marker), ‘new Asian cinema’ (Edward Yang), experimental, ‘third cinema’, B-films, underground, women’s cinema…

Alongside directors, nations and material cultures, there are also specific themes – sometimes less materialist and more tuned in to the utopian possibilities of the imagination – that can be drawn out from the ever-swirling mass of experiments in filmmaking and creative writing about film. This issue’s Special Dossier, on “Performance”, gives a glimpse of a new, evolving kind of critical discourse that downplays dramatic naturalism and character psychology in favour of attention to body, gesture, ‘presence’, physical energy and intensity. Although what has been called a ‘cinema of the body’ (canvassed in Senses since our first issue) has been queried in some quarters as apolitical, this Dossier suggests how the new language that is being developed to describe and discuss the physicality of cinema offers ways to break the impasses of a rigid ‘identity politics’. And the political – mixed with every kind of human, desiring, everyday contradiction – is nowhere more evident than in the featured interview with actor-director Lou Castel. The cinema, as always, beckons as the place where the merely material can be transformed, and opened to the wildest possibilities.

Thanks for this issue go to Timothy Mathieson, Anna Dzenis, William D. Routt, and Anne Démy-Geroe.