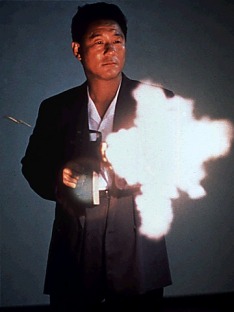 “It is the fate of the yakuza hero to live and die in a closed space.”

In a certain profession, one is known as much for what one does as for what one refrains from doing. And having all your fingers past the age of 40 is always a plus. Kitano Takeshi, Japan’s premier talento (i.e., actor, director, poet, painter, et al), has learned the hard way that this is as true for filmmakers as for gangsters. So it was perhaps inevitable that he should have turned to playing a gangster – a yakuza – in his fourth film.

In Kitano’s Violent Cop (1989) and Fireworks (1997), the police act as border guards between the criminal world and us. In Sonatine (2) (1993), the police are nowhere to be seen – as if, in the most ordered and well-behaved nation on earth, they no longer serve a purpose. Even the yakuza, that other Honoured Society (3), respect their own imperatives and follow their own rules.

Murakawa (played by Kitano’s alter-ego “Beat”) has become too successful running the streets in his designated area of underworld Tokyo. His boss decides to get rid of him by sending him to Okinawa on a sleeveless errand. He and a small selection of his henchmen are to mediate between two warring factions of Okinawa’s yakuza clans. The feud between the two clans turns out to be insignificant, and while Murakawa dawdles, wondering why he was sent to Okinawa at all, his headquarters is bombed and he and his gang are ambushed in a bar. Fleeing to the seaside, they hole up in a remote beach house to wait for the storm to pass and perhaps get a few explanations from higher up. It is here, when the action comes to a complete halt, that Sonatine proves to have far less to do with violence than with the lulls between violent acts, the doldrums in which violent men engage in child’s play that reduces violence to harmless fun. Watching as another of Murakawa’s henchmen falls into a well-concealed sand-trap on the beach, one of them asks, “Boss, isn’t it too childish?” To which Murakawa replies, “What else can I do?”

From this point on, every event in this seemingly aimless film is fraught with a grave significance, a significance that only becomes fully apparent at the film’s conclusion. On its cool surface, Sonatine is a strangely leisured film, made up of juvenile pranks, punctuated by sporadic gun battles in closed spaces (a bar, an elevator, a car). But the film is, in fact, quite methodical in providing clues for what is actually going on.

While his enemies are hunting for him somewhere in the distance, Murakawa and his associates play with cut-out sumo wrestlers until, bored with the cut-outs, they wrestle one another on the beach. But the wrestlers move just like the cut-out figures, their actions manipulated by others outside the ring. They fight mock-battles at night with roman candles, until Murakawa playfully pulls out his .45. They target practice with a revolver and a beer can, until Murakawa turns it into a Russian roulette match – and loses. He puts the revolver to his head and pulls the trigger on the last chamber. Nothing happens – the bullet he apparently loaded was merely sleight of hand.

That night, Murakawa dreams of the match, only this time the pistol is loaded and he puts a bullet in his head. He awakes and, restless, walks down to the shore. A car pulls up to the beach and a man drags a squealing woman into the sand and proceeds to rape her. Murakawa waits for the moment when he’s seen enough and steps past them toward the house. The stranger stops him. “You’ve been watching all this time? You’re a pervert, aren’t you?” he demands. Murakawa head-butts him and he falls to the ground. Regaining his feet, the stranger pulls a knife and growls a threat only to have two bullets fired into his belly. “This is a bad joke.” he stammers, and falls dead. Murakawa notices the cowering woman, puzzled by his nonchalance at killing her attacker.

The woman becomes a fixture at the beach house, drifting into the group almost unnoticeably. The days float by with the ocean clouds. The woman seems fascinated by Murakawa. She tells him he must be a tough guy since he’s not afraid to kill. She proposes that “not being afraid of killing people means not being afraid of killing yourself, right?” He tells her that he carries a gun in order to avoid a fight. “When you’re scared all the time, you almost wish you were dead.”

An hour into the film, when events take over and the film swirls toward its climax, a stranger appears wearing a straw hat and carrying fishing tackle. And, like an angel of death, wherever he goes people die. He wanders through the film, pumping bullets into all and sundry, including one of Murakawa’s men, in the middle of a Frisbee match. Murakawa realizes he must return to the fray, if only to avenge his fallen comrades. The woman promises to wait for him as he drives off to his uncertain destiny. But their wayward, seemingly casual games have already rehearsed the outcome.

Kitano has made a film so deceptively careless that its deeper qualities can be easily overlooked. The dialogue is either emphatic or deflective – take your pick. Kitano concentrates so much on faces, but they never show us much, at least not what we expect. His characters react to violence – even when it is inflicted on them – with an ironic stoicism, not at all surprised to find a pistol pointing their direction. And the way he has of holding a shot a few beats after a scene has ended, leaving us to stare at a blank alley or an empty beach.

Kitano directs, writes and edits the film. And he stars. His face has been called “granitic” in its avoidance of facile expression. But the face expresses the same deadpan ferocity as the film. Joe Hisaishi composed an unostentatious, Tangerine Dream-like musical score. But as for the quality of the photography of Okinawa, I must happily disqualify myself. You see, I was living in Okinawa when Sonatine was filmed, and those resplendent, pellucid days, which Kitano captures so vividly, are almost too lovely to recall.