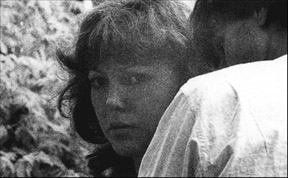 In the first instance, I want to thank you for your wonderful response to L’Enfant secret, published as “Garden of Stone: Philippe Garrel’s L’Enfant secret (1982)” in Senses of Cinema 15. This essay of yours has helped keep alive in and all around me the incredible intensity of that film-viewing experience. I should really say ‘Event’ rather than (personal) experience, because it was an event in the most philosophical sense – certainly not ‘un film comme les autres’.

Before your response was published I had a battle raging within me over whether the film really was that amazing in itself, or whether the Conference event, especially as it was entering its closing stages (L’Enfant secret being the last scheduled item on the agenda), coupled with the knowledge that the print’s arrival was in doubt up until the very last moment, and furthermore that none of us had actually seen the print at the venue, had given rise to my ecstatic feelings as, stunned, I shuffled out of IFC Cinema 2 that evening. There was a sense in which, when we sat down and waited for L’Enfant secret to begin, anything could have been projected. And when the lights went down we certainly didn’t get what we were expecting. Like you, the version of L’Enfant secret I’d lived with for so many years was Deleuze’s, a phantom later embellished by Forbes’ and Philippon’s accounts as well as by the draft script in Garrel and Lescure’s book Une Caméra à la Place du Coeur (1). Therefore the opening images shocked me. I even thought it was the wrong film, probably Les Enfants désaccordés (1964), but hoped that nothing had gone awry and that this short film merely happened to be on the same reel as the feature I had waited for so long to see. In an exponentially scary series of mirrorings, the phantom-film I contained within me was doubled by the ghostly quality of the print’s existence itself, and redoubled by the film’s ‘content’, the tale of a “family of apparitions” as you so beautifully put it.

Soon, of course, the title appeared. But its occult quality ensured that you never ‘settled into’ the film, never succumbed to any clichéd pleasure-driven roller-coaster ride. Next, you found its rhythm, or it found you, swept you away (even your breathing changed), and you were quite literally ‘gone’. Not that your identification with the characters on screen took you to another place – into the imaginary world of the fiction – but somewhere in between the screen and the physical object of your seat an impersonal and temporal event took place. Rivette’s motto in L’Amour fou (1968), “I breathe through your skin”, might apply to this experience, as long as we’re clear it’s Time which is speaking.

Film-event or event with film? I soon realised that every great cinematic experience is such a ‘happening’. Only bad films make you feel like you are alone in a cinema watching a work of art. “Beautiful and chilling as a garden of stone” – when I read your pitch-perfect definition of the film’s mood I began to ponder on the cinema’s unique ability to inspire. What does it mean to be ‘inspired’ by a film if not (I concluded) to write in a manner adequate to the film’s own affect. This is why all great film writing aspires to the condition of poetry. Evaluative criteria must be immanent to the work, commensurate with its ‘grain’ or intrinsic movement: in this case, fragile and tactile. The goal of critique: to enrich one’s experience of the work, which is precisely how your poem “Garden of Stone” worked for me.

L’Enfant secret may be the most haunted film ever made. One is struck by the sense of Garrel inventing cinema, by images that come from a time before Lumière; the film’s characters are haunted by past lives and present possible worlds; the film is haunted by the autobiographical ‘reality’ of Garrel and Nico’s relationship. This autobiographical aspect lends the film as intense a quality as one can imagine. It’s as if John Ford had just lived through Ethan Edwards’ experience and sought to record it on celluloid. This is why L’Enfant secret gives the impression of being “simultaneously a fiction and a portrait film.” It seems to me that this term ‘portrait film’ can save us from the hackneyed fiction/documentary duality, and Garrel has invented its most unique form. From this perspective, imagine the frisson when I read your line “are those painterly smears of blood in Jean Baptiste’s bath and bed evidence of actual suicide attempts?” I take this to include the possibility of a Garrel suicide attempt, the traces of which would then merely have become part of the film’s scenography. It’s this kind of intrusion of pure reality into what is ostensibly a fiction that until now has made J’entends Plus la Guitare (1990) my favourite Garrel film.

I don’t think it’s at all going too far to invoke philosophy in relation to such a film, especially since we’ve already mentioned Deleuze. L’Enfant secret is a very metaphysical film. Behind the seemingly ‘centred organisms’ (the bodies of the actors/characters and their encounters and communications in specific milieus) there are the occult phantasms, an entire network of ghostly presences and incorporeal beings. And what institutes this universe of virtual/actual co-existence is simply love. It is l’amour fou which isolates us from the rest of the world and its everyday demands. Just as in Rivette’s film such intensity can’t survive social interaction and only when the couple have literally carved themselves a new private milieu can it be recaptured.

This is a film-event like no other, a film that multiplies dimensions of reality. There is no sense of a ‘present tense’ in the film. This is “the Dreyer side of Garrel” that you so astutely allude to. Life is endowed with infinite layers or dimensions of reality, some visible, others invisible, but all subject to a temporal heterogeneity. In L’Enfant secret some of these have names, The Cesarian Section, The Ophidian Circle, The Disenchanted Forests. Others might be called The Black Hole or Childhood. It is these “hitherto unfamiliar stratospheres” (your term) that bind and separate the lovers in Garrel’s film. As in Proust, these spectres, even when together in space, exist in different temporal dimensions. Seldom in the cinema has love been shown to be such a fleeting thing. Jean Baptiste and Elli are like desire-lines which form temporary points on different spatial planes of existence but whose cracked selves call out for incorporeal communion across time. One of the questions asked by this film is: what can’t a body do? And its answer? ‘It doesn’t know how to occupy space when alone’. One always feels that the lovers in Garrel will only truly meet again in some virtual eternity. 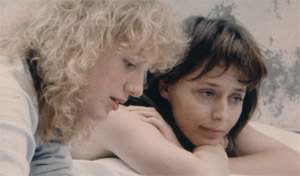 This preoccupation with the couple and little else (a persistent one in Garrel) seems to me to be related to the resistance to Garrel sometimes demonstrated by older colleagues (something which was one of the themes of the “Movie Mutations” exchange you took part in and which was also an issue at the Garrel Eternel Conference). For those like you and I who developed their affective lines of investment and expectation as adolescents in the late ’70s, politics in the accepted (macro-) sense was already a thing of the past – art and love seemed the only things that mattered, all our intensities came from the daily doses of bliss and strife of coupledom or from endless hours lapping up cinema and rock music. We received our life lessons from the (predominately) American ‘road’ culture of the ’70s whose mot d’ordre was: search for a passion to match the landscape’s immensity! When we hitched this notion up to an obsession with the French tradition of l’amour fou and its enclosed spaces it really ignited an affective bomb that we barely knew how to deal with. What these films expressed was that a great love was at its pitch of intensity when lost or nearly so. Imagine my cries of eureka when I first heard Benoît Régent’s ‘the most precise definition of love’ speech in J’entends Plus la Guitare! In other words, and this is something I get from all of Garrel, the astonishingly ‘oceanic’ (as you put it) level of intensity that comes from moments like this in a Garrel film comes from the sense that these bodies are at the mercy of unseen phantoms who cling to them (and to the camera lens) and provoke delirium and discontent, hopeless expectations, inappropriate memories and insatiable passions, in the spectator as much as in the characters. But we shouldn’t confuse this with the Bressonian character who is “blown by the wind”, at the mercy of fate. There is a sort of destiny in Garrel but it’s one whereby, subject to chance, the true lovers will weave in and out of each other’s lives and bodies (material or incorporeal, seen or unseen), now and then colliding and provoking momentous effects of the purest intensity as they pursue (in your astonishing phrase) “the geometry of their intersecting solitudes.” This may also account for the manner in which art and life have become one for Garrel. L’Enfant secret has often been read as signifying that the intensity of life is interfered with by the necessity to create art but, as Jean Baptiste announces, you can’t always separate art and life – there are moments of fundamental fusion: “mise en scène de la solitude, solitude de la mise en scène.”

I think there is a mode of being in Garrel’s world that is very close to the knife-edge survival one finds in Celan’s great poetry. When Julia Kristeva describes the Celanian poetics as follows, she might have been responding to Jean Baptiste in L’Enfant secret:

He tries to construct a liveable habitat in a possible world. Like a resurrection beyond “the lip deprived of the power of speech” [we are dealing with] an addressed narration: it tells of everyday struggle, partakes of the passion, the emotion, the concern, all founded on our modern myth, perhaps the last, the myth of love-founded on and founding it. [Celan/Garrel] specifies the depth which renders this myth of love impossible as myth, and yet absolutely necessary as an ultimate affirmation, not of love but of speech, of the Name, or rather, going further again, of the unnameable silence, of the hold itself at the heart of the impossible link: [film] poetry as a tension contained in the fragmentation of languages, beings, extreme solitude. (2)

Yours, alone in time if not in space,