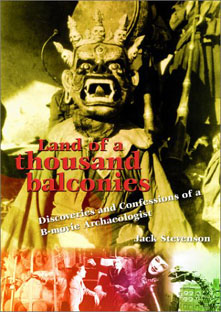 Jack Stevenson’s work as a writer and curator will already be familiar to many Senses of Cinema readers. In the late 1980s, his Pandemonium fanzines gathered together correspondence and interviews with the likes of John Waters, Charles Manson, William Burroughs, and George and Mike Kuchar. Over the following years, Stevenson was a regular correspondent for Fatal Visions, and his essays for Shock Xpress provided some of that journal’s finest moments. While Pandemonium was content to survey an almost generic American underground, Stevenson’s recent writings have been invaluable studies of cinema’s parallel economies – Axis & Allied propaganda, Danish bestiality porn, and North American no-budget cinema (through the two compilations he curated for the Fatal Video label, some of those films found their way to Australian audiences). His continued fascination with John Waters and the Kuchars provided the subject of a previous book, Desperate Visions 1: Camp America (Creation Books, 1996). If I treasure that book principally for its hilarious interviews with Waters, it also remains the best (perhaps the only?) guide to the careers of the brothers Kuchar and their starlet Marion Eaton.

Another of Stevenson’s longtime concerns is with a psychogeography of the cinema-going experience. Like Paul Hammond, Stevenson celebrates that heightened subjectivity uniquely on offer at the “dream palace”, but Stevenson’s is a cracked and tarnished looking glass. Stevenson is perhaps more akin to Joe Bob Briggs, for whom the experience of Drive-In patronage is indivisible from the exploitation films unspooling there:

Of course the film industry wants their product to be received in a standard, uniform way, inoffensive and easily available to the greatest number of customers. Customers who demand more and more comfort. Demands which in turn have given birth to chairs that have more leg room and arm and head rests and drink holders and popcorn holders, chairs like grand airliner seats with plush upholstery that gets softer and softer and softer until it’s hard to even stay awake…

Once upon a time there were theatres you would be afraid to go to sleep in.

Stevenson’s testament is to an eclipsed heritage of repertory, arthouse and exploitation cinemas that ceased operating during the gentrification – or irreversible decline – of inner-urban American neighbourhoods. Concurrent with that real estate boom was the advent of the domestic VCR, a technology that shifted the arena for celluloid rejectamenta into people’s living rooms. Nearly half this current book elaborates Stevenson’s previous writings on the subject into a rigorous and well-reasoned study of the changing fortunes of cinema exhibition. It’s a pop scholarship that accommodates architecture, urban planning, and sociology – as when he describes the demographic shift to the suburbs in the 1950s, which removed these cinemas’ original audiences for first-run Hollywood features.

Stevenson documents not just the vanished grindhouses of New York’s Times Square and San Francisco’s Market Street, but also the circuit of micro-cinema screening venues that tentatively arose in their wake. While modern cinemas came to embody the same homogenised neutral environment as your nearest McDonald’s (and a fare as blandly uniform), cinephile obsessives responded by establishing DIY cinemas in abandoned warehouses, car parking lots, or the hulls of rusted hulks (one thinks of the Mu-Mesons Archives in Sydney, or the Taj in Brighton, among local counterparts to this trend). Stevenson provides bemused but affectionate portraits of these individual friends and collaborators in his own curatorial activities. Their love of film is a doomed romance, but they pursue their mad passion despite some brutal economic realities. Stevenson describes screenings that happened before an audience of one, or less.

The varieties of film championed by these para-cinemas provide material for the remaining chapters of this book. Of greatest personal interest for me: 16 pages on the Scopitone phenomena, and five on Jon Moritsugu. The Scopitone was a film-based “visual juke-box” common in nightclubs and cocktail bars during the 1950s and ’60s. Outlandish pop-surreal musical shorts in garish Day-Glo colour, Scopitone clips are the bridge between the “Soundies” of the 1930s and ’40s and contemporary music videos. Stevenson’s essay, “The Jukebox that Ate the Cocktail Lounge”, is (to my knowledge) the first serious attention Scopitones have received in print. Here, the economic realities become brutalising: the essay is surprisingly sober, devoting too much of its length to the proprietary financing of the franchise and the chain of shady business transactions that involved. Stevenson’s account is crucial for its detail, but to my frustration it elides aesthetic considerations. Even the choicest clips only warrant a sentence or two, at best. Blake Edwards and Roger Vadim both directed Scopitone clips between feature assignments (something you won’t discover from reading this essay); die-hard enthusiasts can pick faces from the chorus-line dancers and give you their names and professional stripping histories! Scopitone has a colourful history, and it deserves a complete reckoning in the future.

Stevenson’s “materialist” approach is evident again in his piece on Jon Moritsugu. Along with Guy Maddin, Moritsugu has been one of the most exciting new directors to emerge from North America since the late 1980s. Moritsugu has arguably been the director most successful at finding a cinematic analogue to punk rock and hardcore, and he has theoretical smarts in abundance. Expelled from four high schools, Moritsugu submitted his early shorts in lieu of term papers for the semiotics degree he completed (with honours!) at Brown University (again, this is information Stevenson doesn’t give you). In 1994, two of Moritsugu’s long-form monsterpieces, Terminal USA and Mod Fuck Explosion, toured Australia as part of the “Into the Underground” film festival; his 1998 Fame Whore screened at the Melbourne International Film Festival in that year. What distinguishes Moritsugu from (for example) the so-called “Cinema of Transgression” is his rigorous conception of the formal possibilities of cinema – in both style and story, Moritsugu’s films have genuinely and extravagantly transgressed filmic conventions. While I’m glad of any information about Moritsugu and his films, Stevenson’s essay suffers from a lack of supporting research. Hit on an aging punk rocker for a glance over some faded fanzines, and you’ll come back with more useful information on Moritsugu than you’ll find here.

Stevenson’s writing in this collection is at its weakest precisely when the reader needs detailed formal analysis of the actual films. That information is especially crucial in the case of Moritsugu’s films and Scopitone clips, precisely because these films are part of a marginal cinema. Another example is his cursory treatment of the films made by the Unarius foundation. This quasi-religious “saucer people” cult will send you their films for free if you ask them the right way (i.e., if you come on as one “space brother” to another). The films are extraordinary, and justify a less cursory investigation – both in themselves, and as social phenomena – than the few paragraphs Stevenson provides.

The worst essay in the book, “Trash Ain’t Garbage: Identifying a New Aesthetic in Cinema”, is redeemed by a better consideration of Craig Baldwin’s Tribulation 99 than I might ever have hoped to read. A beautiful and inspired piece of criticism, it’s Stevenson at his best. Otherwise, this essay is ill-conceived and tendentious, complaining overmuch about art and looking to define to define its generic parameters in opposition to “… an effete concept, a French conspiracy, something that hangs in rich people’s houses”. What Stevenson neglects is that the artistic traditions contemporary with cinema, from Modernism onwards, reach their apotheosis in precisely the kind of “anti-art” that Stevenson valorises. Art, as a concept, is culturally determined by institutions of social legitimation: the most fruitful approach has always been to contest the meaning of the term. Disingenuously, Stevenson refuses to acknowledge the role of an art cinema in promoting the works of Jack Smith, the Kuchars, and Baldwin himself. Baldwin’s style of found-footage filmmaking is not a “sub-genre of trash”, it’s a legitimated form of experimental cinema pioneered by Buñuel in L’Âge d’or (1930) and elaborated by the likes of Joseph Cornell and Bruce Connor (a more recent example is the Film Ist. series of Gustav Deutsch). There’s an historical foundation, specific to Anglo-American culture, for this particular intellectual reductivism. In recent “underground” culture, it owes a lot to punk proselytising by Lydia Lunch (the last I heard of her, she was on the staff of the San Francisco Institute of Art!). It’s a bigoted, hypocritical conceit which served the professional agenda of people like Lunch in the late 1970s, but it diminishes our culture, and narrows exactly those cultural possibilities that Stevenson elsewhere seeks to enlarge.

The passions which animate Stevenson’s search for cinema arcana are evidenced most clearly in the epilogue, “Uncensored Confessions of a Film Collector”. Chapters on the “Cult of Technicolor”, and cinema gimmicks like William Castle’s Tingler and Hypnovision supplement those devoted to para-cinema screening venues. When Stevenson eulogises Dwain Esper and Raymond Rohauer, there’s a strong (not unjustified) sense that he imagines himself as a successor to those freebooting mavericks of cinema exhibition. If his attempts to define a genre of “Trash” are misguided rhetoric, his lengthy explorations of the varieties of a Camp cinema aesthetic are useful additions to an existing critical literature. The text throughout is profusely illustrated by rare stills and promotional materials.

Stevenson is a capable and accomplished writer, but he’s sometimes prone to journalism – a straightforward recounting of names, dates, places, colourful anecdotes – rather than criticism. If neophytes may be rapturously appraised of the joys of Scopitone and Unarius, the informed reader awaits a more complete accounting. Despite this misgiving, Stevenson’s writings are invaluable simply because he treats varieties of cinema which have been “disappeared” from the cinema canon. His accounts of the micro-cinema circuit are fascinating, and make for an illuminating survey of issues relating to the actual exhibition of film. Stevenson argues a compelling case for why we should privilege the unique communal environments that support the subjective experience of viewing a film in the manner in which it was intended to be seen. The films that Stevenson and his kin screen there – a flotsam of celluloid marginalia to delight and confound the unwary viewer – aptly justify their romantic attentions. This book is the ample proof.