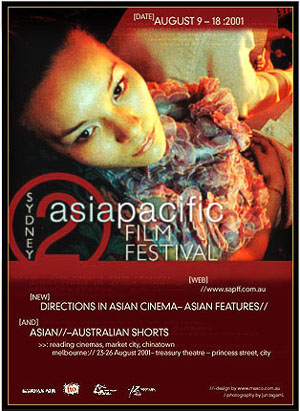 Is it Christmas in July or is this the Film Festivals issue? Either way you look at it, festival fever is about to hit the cities of Melbourne and Brisbane. A month prior, Sydney recently closed its major film festival for 2001 and in this issue Needeya Islam provides an interesting report on a festival heading down a certain direction. Besides the majors, smaller, more specifically audience-targeted festivals have just ended or are about to begin: these include the 2nd Sydney Asia Pacific Film Festival and the 2nd Melbourne Underground Film Festival, both of which sprung from a genuine need to provide particular films for a particular audience whose tastes and interests were not being met.

The coming weeks are really important opportunities for those living on the East Coast of Australia to see on the big screen the latest in world cinema, documentaries, short filmmaking, animation, and retrospectives. Not only Christmas, it’s also a time for birthdays. The Brisbane International Film Festival has grown over the last ten years to become one of Australian film culture’s most innovative and exciting events, with its retrospectives and long-time dedication to Asian film something to be proud of. Meanwhile the Melbourne International Film Festival turns 50, and with a solid history behind it, continues to be as strong as ever with extensive Australian film and world cinema sections, a world first full Ishii Sogo retrospective and various other sidebar and spotlight programs.

Sadly, among all the festival activity that is happening in Australia, none of it includes a screening of a Philippe Garrel film, whose 1982 film L’Enfant Secret is paid tribute in this issue by Adrian Martin who regards it as one of the “monumental” films of cinema history. Martin recently saw this film at a Garrel conference, which is reported on in this issue in addition to the recent Godard conference, held in London.

I am also proud to present both the English and German versions of Alexander Horwath’s excellent essay on Godard’s Histoire(s). This is the first, important step for Senses of Cinema in becoming an international film journal.

A big thankyou goes to all the writers for making the issue what it is. I’d also like to thank Anne Démy-Geroe and Michael Ward from BIFF and Adrian Martin for his editorial assistance.

But really, let’s now turn to the films…