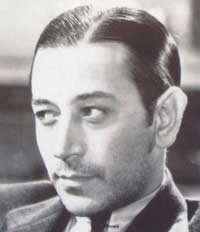 Tony Camonte (Paul Muni) goes down in a hail of bullets, just as you know he will. Because the gangster always dies. Like a snivelling, whining dog, Tony pleads for his life. Yet at the very moment that Guarino, the cop who has dogged him for the entire film, attempts to put the bracelets on him, he makes a mad dash for the door. Once through it, he’s met with a hail of bullets that completes the narrative trajectory so integral to the gangster genre. But is it possible that Tony’s surrender was genuine until a narrative imperative forcibly shoved him out the door? What goes up must come down, even if it has to be shot down. Such is the allusion to the imagined vertical axis described in all understandings of this genre – the rise and fall of the gangster. In Scarface, Tony looks to the Cook’s Tours neon sign, “The World is Yours”, for his existential motivation, and makes the mistake of literalising its metaphorical content. Even though he raises himself above the rabble, the world is never his, because the gangster can never rise above his symbiotic relationship with his symbolic environment. The gangster is a part of the city, and can never transcend his spatial trajectory, because it is as metaphorical as he is fictional.

This allusion to a vertical flight might best be served by an augmentation along the horizontal axis, in which the gangster must keep running until he can run no further. The gangster is always on the move, always in motion, propelled by his insane desire to get to the top. He is a rolling stone, gathering no moss. And you can’t hit a moving target. He is invulnerable whilst he is on the rise, a locomotive of irrepressible vitality, dancing on the skulls of those that occupied the steps on the ladder to success. And all without pause to reflect on what he intends to do when he gets to the top. Tony is certain from the start that the world will be his, but has no idea what he intends to do with it, or even how he’s going to keep it. Of course not. Why would he? But it’s not his desire to be the king that proves his undoing, or even that he wants too much. At the start of the film, in a truly stunning long tracking shot, Tony sets himself on his path by whacking his boss Big Louis Costillo. But not before Big Louis philosophises to his friends, “I got all I wanta,” and “A man allaways a gotta know whenna he’s gotta enough!” With the south side under his belt, and no desire to control the north, Big Louis scoffs at other gangsters who aren’t content with their lot. And with contentment assisting digestion at the end of his self-congratulatory party, Big Louis ceases to move, up or forward. A sitting duck. Later in the film, Johnny Lovo will make the same mistake, not from contentment, but from fear. With the north side looking too dangerous, he takes a step back before realising that Tony has already past him.

When he gets to the top, without time to realise his predicament, Tony becomes the victim of a narrative conspiracy that demands he be gunned down in the streets, like his predecessors. To question generic conventions at this point might imply that Tony’s rise to ascendance was not the result of his own actions, his vitality, his energy, his irrepressible desire to take control of the city. And it might suggest that he had no hand in his downfall. After all, it is Tony’s incestuous craving that causes him to pull the trigger on his best friend, Guino Rinaldo (George Raft), when he discovers he’s the guy shacked up with his sister, Cesca (Ann Dvorak). For all Tony’s crimes, this is the one that undoes him, and it is awkwardly foretold in a preceding scene where two journalists discuss his imminent arrival back from Florida: “This town’s entirely different to when he left it. That new crowd down in city hall is looking for him. The first crack he makes they’ll climb all over him.” These two minor characters conspicuously appear whenever narrative information must be provided, their presence revealing a fissure through which the controlling hand of the filmmakers can be glimpsed. When the structure of a genre must support the life of a film, cracks are bound to appear under the strain of competing elements.

This film is beset by other intrusions into its narrative flow, strange protrusions into its formal arc. It begins with a title that directly addresses the audience, admonishing them about the proliferation of gangsters and crime in the country: “What is the government doing about it? It is your government, what are YOU doing about it?” Towards the middle of the film, the chief of detectives rants against the gangsters like Tony Camonte, and mythologises the old western heroes, men that would meet face to face in the streets. Perhaps it is the shadow of depth in a minor character who can still identify with the honour of law enforcers of old, no matter how fictional, and lament the fact that the gangster would shoot you in the back rather than face you like a man. But this scene is uncomfortably followed by another that takes place in the office of a newspaper editor, where accusations fly back and forth: the papers are glorifying the criminals or just reporting the facts, and the police aren’t doing their jobs or the laws are not good enough to cope with the increased criminal activity. But it is not these scenes that will halt Tony’s progression through the stages of his narrative arc. Like poor Oedipus, he attempts to control his own fate, to fight the forces that would tear him down, only to find that the prophetic narrative is one step ahead of him. In his final and desperate break for freedom he runs headlong into his future without realising that his story has already been written.