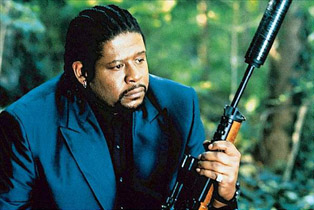 “The Way of the Samurai is found in death.”

– Yamamoto Tsunetomo, Hagakure: The Book of the Samurai

Jim Jarmusch is a truly independent filmmaker with a very distinctive cinematic style. As a director who takes complete creative control of his projects, he has delivered critically acclaimed films such as Mystery Train (1989), Dead Man (1995) and Ghost Dog: The Way of the Samurai. Thematically, Jarmusch is deeply interested in the catastrophic effects generated by the collision of different cultures. (1) Although most of the characters in his films are not able to survive the cultural clash, some do manage to develop a profound spirituality that empowers them and allows them to endure their difficult ordeals. As observed by Jonathan Rosenbaum, characters rather than plot are the crucial pillars of Jarmusch’s films. (2)

Ghost Dog revolves around its title character, an African-American mafia hit man who has taken the spiritual and philosophical posture of a samurai, and his attempts to reconcile his beliefs with those of his employers. Ghost Dog (Forrest Whitaker) devotedly carries out assassinations for his retainer Louie (John Tormey), a mafia foot soldier who once saved his life. Things become difficult when the mafia’s don, Vargo (Henry Silva), orders the murder of one of his associates because he is sleeping with his daughter Louise (Tricia Vessey). Ghost Dog successfully carries out his mission, but Louise witnesses the murder. In order to maintain his image with his daughter, Vargo must adhere to the mafia’s philosophy on revenge and payback. Ironically, Vargo orders the elimination of Ghost Dog. The rest of the film showcases Ghost Dog’s quest for survival. His ordeal is complex, as he also has to adhere to the samurai code and protect his retainer.

Comparable to the manner in which Dead Man deconstructs the Western genre, Ghost Dog deconstructs the myths and conventions of the gangster and samurai films. (3) For instance, the mafia that is portrayed in Ghost Dog is completely decadent, contrasting strongly with the largely romantic and luxurious gangster world shown in films such as The Godfather (Francis Ford Coppola, 1972) and The Untouchables (Brian De Palma, 1987). The godfathers in Ghost Dog are aged, bankrupt and lonely. Jarmusch even adds some ridiculous, ironic and amusing situations to the storyline. For example, the mafia don is behind with his rent and watches television cartoons in a nearly catatonic state. Also, the don’s henchmen cannot even control a spoiled kid who throws objects at them from a window. Even the ‘Industrial City’ they live in seems to be in a complete state of decay and is immersed in total poverty. Ghost Dog portrays a violent and postmodernist environment that contributes a sense of bleakness, despair and dejection to the film. (4)

The samurai world of Ghost Dog is equally decadent. The ancient samurai was an elite warrior dressed in beautifully ornamented armor who worked for feudal lords and emperors. Samurais belonged to a knightly cast and they commanded armies. In Ghost Dog, the lonely samurai dresses in old, dirty black fatigues and lives in a humble rooftop shack. He works for unsuccessful gangsters, and his own employers despise his racial origins. Nevertheless, Ghost Dog holds deeply to the samurai code and philosophy. As a matter of fact, Ghost Dog’s samurai spirituality confers upon him strength and gives meaning to his otherwise violent, criminal and irrational existence. (5)

Ghost Dog attains high levels of spirituality by practicing martial arts and reading the Hagakure: The Book of the Samurai, an 18th century book that established the philosophy of the samurai. Quotes from the Hagakure are presented intermittently on the screen throughout the film. While this seems to interrupt the narrative, it actually provides a philosophical context to interpret Ghost Dog’s actions. But even more, Ghost Dog is a film whose characters share their life and philosophy by exchanging books. Therefore, Ghost Dog seems to be a self-conscious film, which tries to share its spirituality with its viewers by forcing them to read quotes from the Hagakure.

The chaotic environment that surrounds Ghost Dog is in a large part due to the collision of different cultures. Ghost Dog himself is a product of such a cultural clash. He is an African-American hoodlum who reinvents himself as a powerful Japanese warrior working for Italian-American gangsters headquartered in a Chinese restaurant. Even more, Ghost Dog, who does not speak or understand another language, claims as his best friend French-speaking Raymond (Isaach de Bankolé), who is a Haitian ice-cream seller who does not speak a word of English. However, even though they do not understand each other’s verbal communication, they establish a powerful relationship and seem to be bound together by their shared spirituality. The multicultural world of Ghost Dog leads equally to positive and destructive interactions.

Ghost Dog is a very open film in terms of the racial politics it portrays. White men, as represented by the gangsters, are on a declining path of self-destruction. On the other hand, black men are portrayed as spiritual people, and the creators of a new and enigmatic culture which ironically seems to revolve around the myth of Ghost Dog. Consider, for example, the rap songs and gossiping made around Ghost Dog’s character, and the arcane language exchanged between Ghost Dog and an equally mysterious “Camouflage Samurai” (played by RZA).

Racial tensions are highly evident in the film, and are showcased not only by the skirmish that occurs between the openly racist white mafia and Ghost Dog, but also by the bear hunters that appear at one point in the film. Indeed, as Raymond suggests, the bear is a symbolic figure that accurately represents Ghost Dog’s indefatigable spirit. At the same time, Ghost Dog can also be said to stand for ‘blackness.’ Therefore, the white hunters who have illegally killed a bear metaphorically epitomize racist murderers. Such a reading is reinforced when one of the hunters justifies killing the bear on the grounds that “There are not many of these big black fuckers anymore.” The second hunters adds, while pointing a shotgun to Ghost Dog, “For that matter, there are not many colored people around here neither.”

The cultural clash portrayed in Ghost Dog has apocalyptic proportions. The cultural differences between Ghost Dog and the mafia seem to be irreconcilable, and it certainly leads to the destruction of most of the characters involved in the conflict. Ghost Dog is a violent post-modernist film permeated by an inexorable sense of hopelessness. The Hispanic man who is building a boat on top of his roof further highlights the film’s bleakness. He resembles a busy Noah working on his ark of salvation before the wrath of God destroys humankind. (6) Even so, the film tries to convey the hope of a possible non-violent solution, which may be reached by the younger and more educated generations. As the samurai tradition is passed on to an intelligent little girl, and while Vargo’s book-loving daughter inherits the mafia leadership, one can only hope the future is more peaceful. In the multicultural worlds of Jarmusch’s films, an ethnic confrontation that leads to catastrophic consequences seems to be inevitable. And for Jarmusch’s characters, a deep spirituality is their only means of survival and achieving transcendence, even when surrounded by a violent and illogical environment.