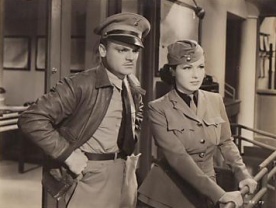 There is no shortage of wisdom in the adage that one should write about what one knows. This can also be easily applied to the subject of our conversations. In the case of film director Howard Hawks, making films about flying was also a passion that showcased his technical knowledge. Hawks (1896-1977) graduated from Cornell University with a mechanical engineering degree. He was a pilot who also worked for a time as an airplane designer.

As a film director, Hawks was as competent making comedies, gangster films and romantic comedies as he was war films and westerns. Because he directed, wrote and produced – and due to the identifiable “signature” of his work – he came to be regarded by some French film critics of the 1950s and 60s as an auteur. The effectiveness of his ability in these diverse aspects of cinema is that he was able to take control of the technical and creative intricacies of making films.

In Ceiling Zero, Hawks tackles the subject of early mail carriers and the demands that aircraft technology and weather made on these courageous fliers. The film begins with a telling and historically prescient quote:

Today’s lighted airways, expert radio and weather service, de-icers and other safety devices enable the large passenger liners to give safe and dependable transportation, which speed mail and passengers along the skyways and are a fitting memorial to the vision and courage of these pioneers who gave their lives in the early stages of this industry to complete the mastery of the air.

From this quote we gather that Hawks – or at least his collaborators – was as historically aware of the technological innovations that flying enjoyed in 1935, as compared with the early part of the century, as we enjoy today in relation to his day.

The film stars James Cagney as Dizzy Davis, an irresponsible, live-for-the-minute, adventurer whose exploits eventually catch up to him in the form of severe remorse and guilt. Davis is a mail carrier who flies for Federal Airlines. From the outset of the film we witness Jake Lee (Pat O’Brien), the airline director, stressing over weather conditions and the idiosyncrasies of his pilots, most of who are older aviation pioneers having difficulties adjusting to the rules of commercial aviation. Dizzy, who is accused of being a grandstander, is heard complaining how “the pioneering days of flying are over”, and how pilots have become engineers and college graduates.

Ceiling Zero is as much about the technological advances that the fledging airline industry enjoyed, as it is about the camaraderie of those who were responsible for bringing it about. Lee is constantly accosted by the demands of new, federal regulations and the reluctance of his pilots to comply. Dizzy and Lee are old friends. Lee has bailed out Dizzy from many an indiscretion. Dizzy is also the consummate ladies man. Now, a Federal Aviation Administration representative has come after Dizzy in relation to a forced landing that cannot be justified by either inclement weather conditions or mechanical failure. Dizzy confides to Lee that he landed the airplane in this way because while flying at 1000 feet he passed over a Château where he saw “four beautiful dames in a pool”. When asked by Lee if they were brunettes, Dizzy tells him, “I couldn’t tell from that altitude”. For this and other reasons, many critics consider Ceiling Zero to be the best of the Cagney-O’Brien films.

The real drama of the film unfolds when Dizzy feigns a bad heart condition and asks his long-time friend, Tex (Stuart Erwin), to cover his mail route in order for him to go to dinner with a 19-year-old student pilot, Tommy Thomas (June Travis). Dizzy is 34 years old.

While Tex is flying the weather turns violent, heavy cloud cover rendering “ceiling zero” visibility and giving us the title of the film. Quickly thereafter Tex’s radio breaks and those on the ground scramble to guide him to land. Tex crashes into a hanger and eventually dies in hospital from his injuries. Dizzy then admits to Lee that he lied about his health in order to go out with Tommy. Dizzy, of course, feels great remorse, but as is often the case in Hawks’ films, Dizzy doesn’t talk about his remorse but eventually “acts it out”. He then knocks out a young pilot, locks him in a locker room, and attempts to deliver the mail in a blinding fog and ice storm. Dizzy tries to assuage his remorse by trying to improve the new de-icing technology that has been installed on the younger pilot’s airplane. Before crashing, he instructs Lee on the radio about several ways that this technology must be improved. In this scene Hawks offers very detailed technological knowledge, illustrating that Dizzy knew exactly that he was going into the ice storm to serve as a guinea pig.

Interspersed between Hawks’ fast-paced dialogue and his acumen for technological accuracy, Ceiling Zero is also a story of human frailty and the eventual hubris that often accompanies it. Dizzy “makes good” at the end of his life. Perhaps Hawks states this best by framing these human emotions in the technological knowledge required to define “ceiling zero”:

That time when fog, rain or snow completely fills the flyable air between sky or ceiling and the earth. Until recent years no pilot dared to fly in ceiling zero weather. Then came the airmail pilots who, flying alone, risking no lives but their own challenged and conquered ceiling zero.

Of course, Dizzy’s flight is exemplary of human bravery. In a conversation with Tommy he answers the young woman’s quip about what is so special about flying with the same individual resolve, zest for life, and valour that characterise his life: “When you’re up there you’re absolutely on your own. It’s strictly a one man show. The world is down there under your wing. Nobody can touch you. There’s nothing that anyone can do to you.”