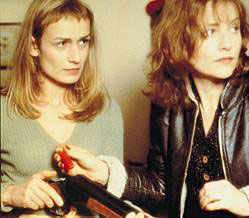 Spoiler warning: This review reveals the film’s ending, so I urge readers to put it aside till after seeing the film.

Released in 1995, Claude Chabrol’s forty-ninth feature, La cérémonie, was greeted with ecstatic reviews. Les cahiers du cinéma suggested Chabrol may be France’s greatest filmmaker.1 Seen retrospectively, in light of his two most recent features – Au coeur du mensonge (1999), Merci pour le chocolat (2000) – what may be striking to some viewers is the film’s sheer minimalist aesthetic. The title, changed from Ruth Rendel’s source novel A Judgement in Stone, invokes the notion of ritual: an important theme that informs both the narrative and directorial style.

The narrative premise is unremarkable. Sophie (Sandrine Bonnaire) is hired by the well-off Lelièvre family to work as their maid in residence. She strikes a friendship with Jeanne (Isabelle Huppert), a troublesome and eccentric postal clerk. But tensions mount between Sophie and her employers, such as when they forbid her to receive Jeanne, whom they suspect of opening their mail. This conflict, resulting from admittedly familiar class-tensions, paves the way for an unspeakably violent denouement. In itself, La cérémonie offers a pretty archetypal narrative pattern, familiar to Chabrol, which moves from the quotidian to tragedy, and with notable antecedents in both crime fiction and high literature (remember, Chabrol has adapted Madame Bovary).

The film’s undermining of conventional social dynamics is subtly inscribed in its mise en scène. As a perceptive review in Les cahiers noted, Sophie’s second appearance bears a hint of the unexpected: as the wife Catherine comes to meet her at the train station, Sophie is already waiting on a separate platform.2 Her being placed (initially) outside of the frame suggests omniscience: she’s free to see all, yet remain unseen. Within the formal set-up of this scene, she implicitly has the upper hand over her employer, which foreshadows the genuine reversal of power she will eventually exercise over Catherine and her family.

More interestingly, Chabrol presents certain gestures and actions in a rigorously mannered form, making them seem ritualistic. As the relationship between Jeanne and Sophie grows increasingly intimate, he shows them at one point seated arm-in-arm. Although they are sharing affection, in their composure Sophie and Jeanne appear mechanical, as if their actions are the playing out some larger scheme.

In crime fiction, criminal behaviour is often not so much a result of free agency as something determined by psychological and social factors. However, in Chabrol, the urge to explain crime is undermined by the competing view that evil itself is unexplainable. Sophie and Jeanne’s illicit behaviour is not simply a compulsive backlash against class inequality but a curiously ordained ritual. The ceremony of the title is of course the killing of the Lelièvre family. This is both tragic irony and poetic justice since not only does Lelièvre mean “the hare” but Sophie and Jeanne use the same rifles that the family uses to hunt animal prey.

Given a closer look, though, “evil” for Chabrol reveals a mixture of conflicted sentiments, including ambivalent attitudes towards homosexuality. The astute readers will have noted the homoeroticism in the above descriptions of Jeanne and Sophie. Regrettably, traces of homophobia are present in Chabrol’s early film criticism, from the ’50s, but I think it would be a mistake to locate comparably unmitigated bigotry in his later films. As readers of Patricia Highsmith should know, crime fiction often has a double-edged take on so-called “sexual deviancy,” making it the subject of the author’s morbid romanticism. In La cérémonie, the characters’ latent sexualities may insidiously be equated with evil, but this evil remains immeasurably more moral than the hypocritical and hierarchical society it attacks.