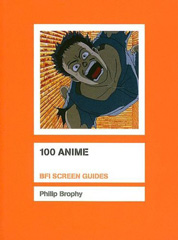 If Philip Brophy was an anime character, he would have tentacles growing out of his eyes.

Seriously. He would use them to pick up on the strange kinetic energy and subtle tactile vibrations emanating from his TV screen, permitting him to perceive anime (Japanese animation) in a fresh way. His new book 100 Anime is attuned to this art form’s frenetic frequency. In Brophy’s inimitable fashion, the book is filled with neologisms and pithy insights. He invites the reader to “dive in – things become viscous, shiny, loud” (p. 2).

To those familiar with Brophy’s work (as curator, speaker, score composer, writer, director, etc), it should come as no surprise that he is advocating an immersive and energetic engagement with anime texts. As with the “cacophonic sensurround” environment he created for Kaboom!, the animation exhibition at the Museum of Modern Art in Sydney in 1994 and subsequent edited monograph (1), as well as the various articles he has published on anime, Brophy brings vicious yet infectious energy to his work (2).

But, in the absence of eye-tentacles, Brophy instead prescribes for the viewer a rewiring of certain bodily systems – synaptic, musculatory, auditory, optical, skeletal – in order to access the dynamic anime experience. He suggests that the tweaking of these networks will enable appreciation of the corresponding five key elements of anime: “energised form, calligraphic momentum, sonic aura, decorative surface, and mannequinned form” (p. 8). These five features form the basis of his theoretical framework for approaching an analysis of the films.

“If anime is a body, no existing medical practice is suited to examining it” (p. 7).

There are other anime books out there, but in the main they are chatty fan texts such as Gilles Poitras’ Anime Companion (1999), Helen McCarthy’s Anime Movie Guide (1996), and Antonia Levi’s Samurai from Outer Space (1996). All are handbooks to navigate the “wacky” Japaneseness of anime, written for a predominantly American audience (see Levi’s chapter title, “Disney in a Kimono”). These books provide a peepshow into Japanese culture for an audience interested in the Other-ness of Japan.

This “numbing transliteration” (p. 4) is precisely what Brophy attempts to bypass in his idiosyncratic approach. He doesn’t want to understand Japan through Occidental goggles. He wants to tune into the text as experience, and the text as texture. While vociferous in his objection to the current trend of framing anime in terms of anthropology (customs and classifications) and kooky cultural difference, Brophy acknowledges the difficulties in approaching the texts as gaijin (outsiders) and the need for some knowledge of Japan’s cultural matrix from which these texts emerge. This is why he places energy at the centre of his argument, making the perception of anime a matter of “tuning in” and “rewiring” the senses. Energy is necessarily cross-cultural. It is in the imaging and drawing of movement that cultural characteristics become apparent.

The reviews and introductory essay offer an intelligent, if frenetic and brief, treatment of the anime genre/form. Brophy has selected titles to reflect the sheer range and complexity of anime-ic texts. It is not a “top 100” or “Anime for Dummies” approach; rather, he has chosen works that are perplexing and strange, artistic and pop-crazed, mystical and cheesy. Each film has a distinctive quality – unusual visual design, satiric narrative, etc. – which merits its inclusion.

Anime and manga mediate this cultural interest in remaking and re-imagining the body. Anime in particular enters into a discourse of post-humanism, where the body is malleable and fluid, can be broken down and built up again. Brophy points to the fluidity of gender roles in the shojo genre as being a site of fantasy and excess, rather than repression: “[Utena] is a hybrid morph of hermaphroditical duality, amplifying the sexuality of each gender rather than cancelling them out” (p. 19).

“Sublime in its post-humanism, anime tells the story of a human who dreamt of being a robot – and whose dream one day came true” (p. 16).

Brophy’s introduction takes a fast dash through the big ideas informing critical analysis of anime to date – its relation to manga (comic books), and to cinema, and the medium’s “flatness”. One of the more interesting points is his insistence on the centrality of post-human “transcendence” and “becoming” to any understanding of anime. Anime is entirely about movement between states of being, whether fast or slow. As Brophy points out, “the ‘being’ of a person (which can be one’s soul, mind, blood-line, weapon, limb or organ) is always caught in modes of transition” (p. 7). Likewise, the physical act of creating cel animation is necessarily about advancement and replacement.

This expansive theory of animetaphysics draws on the animism inherent in Eastern religions such as Zen Buddhism, and also on the history of Japanese art. Brophy argues that “Japanese art – including anime – emboldens visual pleasure at surface level while presenting the dense data-encoding that resides within its superstratum.” (p. 14). This concatenation of layers, of surface and depth, is at the heart of Takeshi Murakami’s “superflat” manifesto. Murakami uses the term to explain and critique the stubborn two-dimensionality of anime, manga and Japanese art, and Japan’s kawaii (cute) consumer culture.

Brophy observes that, in Japan, dualities such as past/future have not suffered under postmodernity’s push to irrelevance; instead, they “mirror each other in their ultimate non-existence” (p. 224). Opposites exist to be played with, to be re-imagined at will. Other epochs and eras are launching pads to imagine a different reality, a different fantasy. In this sense, temporal, spatial and generic differences are elided.

Recently pondering the European steam-engine technology of Katsuhiro Otomo’s 2004 film Steamboy, I was curious to see Brophy’s take on the movie. Brophy notes that “[Steamboy] imagines through vivid demonstrative connections how future and past can be encoded into each other” (p. 223), suggesting that it is irrelevant when and where the imagined past and the speculative future take place. The milieu is simply texture. Otomo, director of the classic Akira (1989), has termed the film “steampunk” in ironic response to the expectation that he would produce another sci-fi cyberpunk film. Like the spherical “steamball” at the centre of the narrative, Brophy posits that the film merges mechanical possibilities and elemental natural power into a uniquely Japanese vision of “techno-nature”. The protracted destructive scene at the climax (which begins about halfway through the film, much like in Akira), as the gigantic steam-powered city-ship destroys most of London, mourns and celebrates this awesome power.

The BFI Screen Guides are a highly readable and academically adventurous series, and 100 Anime is a welcome contribution to anime literature. Brophy convincingly argues for being “disoriented yet seduced” by anime, and the book will certainly aid digestion of the medium for novice, academic and otaku (obsessive fan) alike. Unlike most other guides, attention is paid to the formal and stylistic elements of the films, and Brophy’s critical insight betrays his long involvement and interest in this art form.