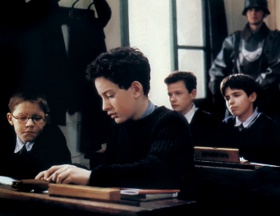 In her recent study, Childhood and Cinema, Vicky Lebeau observes that Roberto Rossellini’s war trilogy – Rome, Open City (1945), Paisà (1946) and Germany Year Zero (1947) – helped to found a canon of works in which filmmakers turned to the figure of the child to explore the legacy of war and genocide in the 20th century. “It is, perhaps, because he sets the film in the winter of 1943-4”, suggests Lebeau of Rome, Open City,

that Rossellini is able to maintain that image of the (Catholic) child witness over and against that of the child as object of Fascist violence […]. By contrast, that theme comes right to the fore in a number of films from the 1980s and ’90s: Malle’s Au revoir, les enfants, Holland’s Europa, Europa, Spielberg’s Schindler’s List and Klimov’s acclaimed Come and See. (1)

An interesting thesis as to why filmmakers have utilised the figure of the child in war films has been put forward by Tyrus Miller. Miller argues that “setting child characters against intense and difficult historical circumstances [these films] highlight the peculiar phenomenological capacities and limits of children’s abilities to interpret, comprehend and act in the world” (2). These limits of children, their motor-helplessness, are touched upon by Gilles Deleuze in Cinema 2: The Time-Image. Deleuze argues that “in the adult world, the child is affected by a certain motor-helplessness, but one which makes him all the more capable of seeing and hearing” (3). Later in the book, Deleuze discusses the work of director Louis Malle: “In Malle, it is always a movement of the world which brings the character to incest, prostitution, or disgrace, and makes him capable of a crime […]” (4). The Mallean film, therefore, might be considered one “in which the fictional characters are secondary to the forces of the cinematic world in which they live” (5), quite the opposite of such earlier films exploring the childhood experience of WWII as René Clément’s Jeux interdits/Forbidden Games (1952) in which, after the initial traumatic impact of war, “life moves to the rhythm of the [child] characters and organizes itself around them” (6).

Shot between January and March 1987, and released in October of that year, Au revoir, les enfants saw Malle return to France after more than a decade working in the United States. Undoubtedly the director’s most personal film, it allowed him to revisit a dramatic and painful episode from his childhood: “The screenplay came to me in a single burst, in two weeks, almost as if it were writing itself. Of course, to these two weeks must be added the forty years during which I nursed my burning secret memory to myself.” (7) It is interesting to compare Malle’s film with other similarly themed works released around the same time such as Steven Spielberg’s Empire of the Sun (1987) or John Boorman’s nostalgic, autobiographical Hope and Glory (1987). However, as Philip French has observed, films made in countries that actually suffered Nazi occupation “engage with legacies of pain and guilt which stem from a traumatic experience far removed from all but a minute handful of British contemporaries” (8). As well as Au revoir, les enfants, films such as Elem Klimov’s harrowing Come and See (1985) amply highlights this point.

Set in 1944, Au revoir, les enfants tells of the relationship between two boys, Julien Quentin (Gaspard Manesse) and Jean Bonnet (Raphaël Fejtö) in a Catholic boarding school run by Carmelites in a small town on the Île de France. After a period of initial hostility between the two upon Jean’s arrival, the boys’ shared interest in music and literature cements their friendship. Jean claims to be a Protestant whose father is in a prisoner-of-war camp in Germany and his mother in Vichy France, but Julien soon discovers that his friend is in fact Jewish (real name Kippelstein) and is in hiding at the school with two other Jewish boys with the collusion of the school’s headmaster, Père Jean (Philippe Morier-Genoud).

Au revoir, les enfants sees Malle return to an examination of life under Nazi occupation. It follows Lacombe, Lucien (1974), a film which, “at its release and for many years after […] was the most controversial of all feature films about the German occupation of France” (9). Since the release of that film, Malle had felt that many of the details and memories of his life at boarding school had begun to haunt him but he was hesitant about attempting to recreate them on film:

I would have hated myself if I had failed […]. There was nothing obvious about that story when you think of it. It could be seen as a sort of variation on the Holocaust and there’d been so many films already about this subject. I was convinced I should deal with it, but was not sure I would go all the way. (10)

“The childhood described by Malle [in Au revoir, les enfants] is silence, guilt, fear” (11), writes Luciano Cecconi in I bambini nel cinema and indeed, unlike such films as Forbidden Games or Come and See, the children in Malle’s film do not suddenly find themselves faced with the full, violent impact of conflict and Nazi occupation. Malle instead shows how life at a privileged boarding school is slowly contaminated by the war, how it seeps into their lives until finally, in the film’s shattering concluding scenes, the full horrors of occupation are revealed.

As Malle himself has admitted, the character of Joseph in Au revoir, les enfants holds many similarities with that of the teenage collaborator in Lacombe, Lucien. Working in the school’s kitchen, Joseph – a surly, disgruntled orphan – gets involved in small-scale black market dealing with the Jewish boys. When these activities are discovered, Joseph is dismissed from the kitchen. In the film’s final sequence, Jean discovers that it was a vengeful Joseph who informed the Gestapo of the whereabouts of the Jewish children.

Upon the arrival of the Gestapo, Julien’s brief, nervous glance at Jean in their classroom unwittingly seals his friend’s fate. In these final scenes, like those of Come and See, the film steps out of its diegetic world, its linear progression. The voice of Malle is heard over a close-up of Julien, who of course represents his younger incarnation:

Bonnet, Négus and Dupré died at Auschwitz, Father Jean at Mauthausen. The school re-opened its doors in October 1944. More than 40 years have passed, but till the day I die, I will remember each second of that morning in January. (12)

As Malle states, “I thought it was important for people watching the film to understand at the end that this story [was true] and actually came from my memory. And I knew it would come on the close-up of Julien.” (13)

For Malle, like Klimov, the long process of trauerarbeit, or “mourning work”, culminates in a late masterpiece, one in which “history, autobiography and filmmaking come together […] to form a site for painful but curative ‘working through’” (14).