The 46th Cork Film Festival took place in the second week of October. Spread across three venues, the Cork Opera House, the Kino cinema and the Triskel Arts Centre, it provided its usual mix of Irish and international shorts, features and documentaries.

It got underway with what was probably the most eagerly awaited event: a gala screening of Kirsten Sheriden’s first feature, Disco Pigs (2001). Irish cinema’s most frequent failing is probably what could be defined as an excessive politeness, a sort of bland tentativeness in the face of a still largely undefined cinematic identity. Disco Pigs seems to bend over backwards to avoid this and ends up falling in a noisy, messy heap. It is the story of two inseparable teenagers, born on the same day, creating (like the heroes of Cocteau’s Les enfants terribles [1949]) a dangerous fantasy world of their own in which there is no place for the real one. Hopelessly in love with its own material, Disco Pigs constantly confuses crassness with intensity, pretentiousness (especially in the writing) with poetry. Every element is relentlessly overstated and the overall effect is similar to being cornered by an unpleasant drunk who insists on shouting his entire life story in your face, hyperbolic, semi-coherent and ultimately extremely dull. Yet in the middle of all this stylistic hamming there is the wonderful performance of Elaine Cassidy, an actress of great subtlety, previously seen in Egoyan’s Felicia’s Journey (1999). Now and again, seeing her face hovering in the background of a scene, lids drooping over her bleary, unfocused eyes, her expression bathed in an innocent, ecstatic malevolence, I understood what this film should have been. I look forward to her next performance, whatever the film may be.

By far the most exciting moments of Irish filmmaking at the Festival were film-artist Clare Langan’s luminous landscapes of the mind, Forty Below (1999), Storm (2000) and, especially, Too Dark For Night (2001). These short pieces concentrate on empty landscapes into which figures occasionally appear and vanish. Visually, they are reminiscent of the Sokurov of Mother and Son (1997), a film, like certain of Tarkovsky’s but very few others, in which landscape is experienced by the camera rather than just observed. Like Sokurov, Langan alters the world she films with specially constructed lenses, but rejects post-production digital manipulation. Unlike Sokurov, the pace of her films is quite rapid, images shifting like the waves, clouds and sand that they explore. Forty Below takes us to the bottom of the sea and Storm‘s title is self-explanatory. By far the most impressive, Too Dark for Night depicts a post-apocalyptic desert in which what buildings there are slowly sink into the sand.

The international features section had no shortage of gems this year. Chief among these for me was Sandrine Veysset’s grim, heartbreaking naturalistic melodrama Martha…Martha (2001), an almost unbearably tender, violent film dramatising the effects of suppressed trauma on a poor family, and David Lynch’s dazzlingly multi-layered Mulholland Drive (2001), which marks the most complex, sophisticated level Lynch’s dream logic narrative style has yet reached.

It was not the only great example of the cinema of the surreal in the Festival: Jan Svankmajer’s wonderfully wicked Little Otik (2000) is probably his best feature film to date. It updates a Czech fairytale about a childless couple who adopt a piece of wood that looks like a baby and proceeds to come alive and start eating people. Full of dark humour, the wooden ‘baby’ is a triumph of Svankmajer’s animation skills, appealing and frightening by turns, but always somehow disturbingly awkward and absurd.

Invincible (2001), Werner Herzog’s return to the feature film after years of concentrating on documentaries, is certainly tamer and less inspired than his great films of the ’70s. Yet it has an appealing dignity that is ultimately quite moving. It tells the true story of a Jewish strongman in the months prior to Hitler’s rise to power who believes himself to be the new Samson, destined to save the Jewish people from Nazism. Yet, like so many of Herzog’s visionary heroes, his plans end in failure – he dies in an accident two days before Hitler’ election. Invincible is distinguished by an extraordinary performance from Tim Roth that cannot but remind one of Rudolph Klein-Rogge in Lang’s ’20s films and by some astonishing dream scenes that only Herzog could have created.

Beijing Bicycle (2000) from Wang Xiaoshuai is a painful, blackly humorous story that starts off like a modern take on Bicycle Thieves (Vittorio De Sica, 1948), with a country bumpkin working as a courier in Beijing and having his bicycle stolen which loses him his job. But that is only the beginning of a series of increasingly cruel, comical predicaments to befall the almost ridiculously resilient hero as he attempts to get his bike back. Shot in a deadpan style sometimes reminiscent of Kitano, it was definitely one of the Festival’s wittiest and best-looking films. 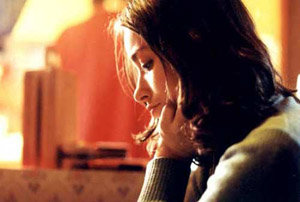 Also memorable was Jessica Hausner’s Lovely Rita (2001). Reminiscent of Bresson’s Mouchette (1966), it is a stark, pared down description of the disturbingly banal circumstances which drive a teenage girl to murder her oppressive parents. The atmospheric, snow bound mountain locations are used effectively. Another teen story provided the Festival’s biggest disappointment: Catherine Breillat’s Fat Girl (A ma soeur, 2000). Like her masterful 36 fillette (1987) it deals with a teenage girl’s attempts to lose her virginity. This time her first sexual affair is seen through the jealous eyes of her overweight younger sister. Certainly a step up from the ridiculous Romance (1999), Fat Girl has its good points. All of Breillat’s usual nasty, sex obsessed characters are well played and the uncomfortable intimacy of some scenes certainly hits home. What really goes wrong is the pathetically simplistic resolution she comes up with for her story in the melodramatic final scene. She manages to trivialize all that went before and leaves one questioning whether she is still a courageous explorer of some of the more squeamish areas of human relationships or has simply become too fond of sensationalism for its own sake.

In terms of non-narrative features, there was Marion Hansel’s Clouds (Nuages, 2001), Philip Hoffman’s What These Ashes Wanted (2001) and Craig Baldwin’s Spectres of the Spectrum (1999). Subtitled ‘Letters to my Son’, Clouds depicts various types of clouds over different landscapes accompanied by readings of unsent letters by the director to her son. The strange thing about this potentially most intimate, reflective of movies is how cold it seems. The images are often magnificent, but also very imposing. Hansel herself doesn’t read the letters; rather she has employed several great actresses to do it for her in their own languages for release in different countries, Charlotte Rampling in the case of the English-speaking world. The result is impressive but oddly impersonal.

In What These Ashes Wanted Philip Hoffman recounts his relationship with Marian McMahon and his reactions to her untimely death from cancer. Using a variety of techniques from home movies to still photos and hand treated film, his attempt at bringing the audience into his mind and feelings is often successful and always interesting. Spectres of the Spectrum is definitely the best of these three. An irreverent, freewheeling, mostly found-footage essay that playfully invokes the forms of science fiction in chronicling the potentially apocalyptic progress of technological growth, it provided some of the Festival’s most exhilarating viewing.

One element sorely missing from the Festival was the presence of any old films, with the exception of a very short series of Irish films (and it’s always great to see Huston’s The Dead [1987]). It would be nice to see the Festival start their special annual screenings of silent movies again.

Cork has the reputation of being more a short film festival than a feature one. Although I did not attend all of the shorts programmes, from what I did see Emer McCourt’s First Timers (2001) was definitely the best thing on offer. A wonderfully warm, funny, personal film, it captures a conversation between three women about giving birth. But it is the reactions of their babies, also present, that steal the show. Irish animation was also particularly strong, with films such as Ruairi Robinson’s hilarious Grey on Grey (2001) and Cathal Gaffney’s charming Give up your Aul Sins (2001).

In terms of no or very low budget local work screened at the ‘Made in Cork’ section, light comedy was definitely the order of the day. Ronan Phelan’s award winning slapstick crowd-pleaser Gangs of Waterfall (2001) scored an exceptional hit with local audiences and will probably go on to receive wider attention. It was a student film from the film and video class of St. John’s Central College and other students also had work screened: Kevin Lehane’s The Making of Scared Stiff (2001) and Kieran Fitzgerald’s This is Al (2001), both also in the light comedy vein. Ex-student Jason Browne was in a more thoughtful mood with his intriguing, atmospheric film poem The Nightsweeper (2001) (on which I worked as cameraman for most of the scenes). Deirdre Morgan and Sophie Turaud’s documentary Santiago (2001) was definitely one of the best and, for Cork, most unusual films in the section. An eight-minute documentary filmed in Cuba, Santiago is about legendary documentary filmmaker Santiago Alvarez and the film festival named after him. The only feature length piece screened this year was Cathal Condon’s ambitious Love’s Elusives (2000), an interesting attempt to marry a talky art-house piece with the aesthetics of a thriller or horror movie.

At the end of the day it is perhaps this commitment to the fostering of local talent that is the most admirable aspect of the Cork Film Festival, an event which manages to be both international and also small enough to remain very local.