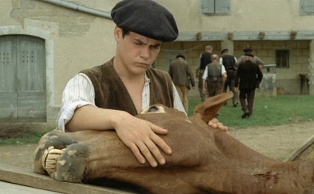 Over the course of his career, Louis Malle made two comparable films set during World War II. Both were projects that arose from Malle’s personal experiences, and were similarly long in gesticulation: born, as the director himself notes, after the extended process of his maturation as a filmmaker (1). Narratively, both films focus on young male protagonists; they examine a relationship across the divide between Catholic and Jew and share an emphasis on a traumatic coming of age or process of self-realisation set inside an insular, self-enclosed milieu on the brink of collapse during the final days of the war. The latter of the two, Au revoir, les enfants (1987), views the horror of occupation and collaboration through the uncomprehending prism of childhood and the perspective of young boys who bear witness to its blindly destructive force. The earlier, by contrast, adopts the opposing point-of-view and considers collaboration from the perspective of a teenager who becomes a member of the French Gestapo in a small town in Southwest France.

The resulting film, Lacombe, Lucien, is arguably the most controversial work in a career frequently marked by controversy: a film both praised and derided, heralded as a masterpiece yet denounced as dangerous (even within the same publication, the newspaper Le Monde). It was both revered and reviled, welcomed and misunderstood (the journal Liberation branded it an apologia and a pro-collaboration narrative), in roughly equal measure. But beyond this it became an important film, as along with Marcel Ophüls’ documentary Le Chagrin et la pitié/The Sorrow and the Pity (1969), it overturned a strictly taboo subject in France and contributed to a climate in which the heretofore unspoken, unacknowledged facts of the history of Vichy France could be brought to light. As such, the differences of opinion over the film were essentially unimportant in the face of the debate that it stimulated, and the consequent re-examination of official (Gaullist) French history that had contended that France had by and large rejected its German occupiers.

This polarised reaction to the film was exacerbated by Malle’s unsettlingly ambiguous portrait of his central character. One of his most prized and admired traits as a filmmaker is his non-judgemental attitude toward his protagonists, something strengthened by his openness to observing circumstance and social influence as much as personal inclination, and his interest in characters whose actions and behaviour he can probe and question. The general absence of point-of-view shots in Malle’s cinema underlines this point; we tend to look at his characters rather than with them. And consequently – from Ascenseur pour l’échafaud/Lift to the Scaffold (1957) and Les Amants/The Lovers (1958) in France to Pretty Baby (1978) and Alamo Bay (1985) in America – one is generally encouraged to confront and consider his protagonists: to think about and question, rather than simply empathise with, who they are and how they behave.

Lacombe, Lucien represents the most lucid example of this distinctive Malle-ism: so much so that Pauline Kael, reviewing the film for the New Yorker in 1974, remarked upon the film’s openness as an almost documentary aesthetic (2). Malle was, of course, an accomplished documentarian as well as a feature filmmaker (3), but this description seems to me to miss the point of Lacombe, Lucien’s particular idiom. Working for only the second (and final) time with the great Italian cinematographer Antonio “Tonino” Delli Colli (frequent Director of Photography for Pasolini, Fellini and Leone), Malle follows the example of Le Souffle au coeur/Murmur of the Heart (1971) and cultivates a languid, measured visual and narrative style in which a steady accretion of observational, often narratively incidental, detail builds from and around the blank, opaque young protagonist. The weight of these details (Lucien’s hunting, his time in the countryside, his bicycle breaking down) can then be inferred by the fact that each is repeated at the end of the film, following Lucien’s rescue of France and her grandmother and their flight to a remote location in the country. This subtly patterned and crafted narrative structure is designed to connote an existential questioning of identity and subjectivity, to imply that there is no sense of evil or of goodness save that which we create through our actions or reactions at any given moment. In other words, the bracketing effect of these narrative situations and visual compositions allows us to observe Lucien becoming both a negative and positive, even heroic character in comparable circumstances.

In this way, Lacombe, Lucien can be regarded as an important link between Robert Bresson and Bruno Dumont, between the driven and tormented existential souls of Journal d’un curé de campagne/Diary of a Country Priest (1951) and Un condamné à mort s’est échappé, ou Le vent souffle où il veut/A Man Escaped (1956) and the blunt, alienated, un-reflective and ultimately brutalising farmer of Flanders (2006) (4). Malle has described the theme of his film as “the banality of evil” (5). However, like Flanders, it can perhaps best be described as “the ease” or “the availability of evil”, particularly to the apolitical: that, as already noted, good or bad are not fixed, mutually exclusive absolutes, but rather coterminous entities. The character of France is, in this sense, of equal importance to Lucien. She may belong to a persecuted minority, but her complicity in the horror of collaboration as witnessed in her anguish at being a Jew and her continued, willing relationship with Lucien suggests an objective correlative to him, an equally confused adolescent identity in perpetual flux. This is the point of the film’s disturbingly amorphous ending, as France is crystallised at the moment of decision, twice poised to strike against Lucien, and both young characters seem to look as much into the camera as at each other. Does this explain these people? Does it qualify our view of the titular protagonist and his actions? And is he indeed an evil character? That, as Malle would say, is up to each of us to decide for ourselves.