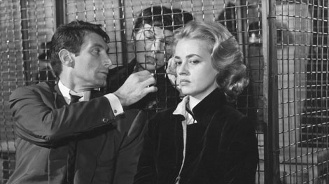 Florence: Being so inept can be a lifesaver.

I would fain have them believe that I have been, in some measure, the slave of circumstances beyond human control. I would wish them to seek out of me, in the details I am about to give, some little oasis of fatality amid a wilderness of error.

It is one of the most extraordinary opening sequences in the modern cinema. A woman, tightly framed, is speaking to her lover. Is she in distress or ecstasy? We soon discover they are plotting to kill her husband, a tired scenario in literature and cinema since at least James M. Cain published The Postman Always Rings Twice (1934) and Double Indemnity (1936). The camera slowly pulls back to reveal Florence Carala (Jeanne Moreau) speaking on the telephone, introducing the film’s central theme of alienated emotion and identity in the (post-)modern metropolis (the film will end with another close-up on Florence, again talking to a lover who isn’t there and whom she’s still failed to meet; a disconnect marked by the photograph that proves the couple’s guilt, with its happy togetherness that belongs strictly outside this narrative). But here, at the beginning, there is another break – the lovers have been separated by geography; now the narrative is suddenly ruptured by the credits – and Miles Davis’ trumpet – the sequence shot as if it were a trailer for the movie we’re watching. The lovers’ words are no longer audible; their bodies are further separated by constraining compartments – telephone box and office block; those buildings and walls of glass that form the mise en scène of modern Paris, serving as motifs throughout the film, and that seem to obstruct any possibility of intimacy.

The recurrent images of unhappy wife Jeanne Moreau virtually sleepwalking through city streets at night would be taken up by Michelangelo Antonioni in La notte (1961) (2). The chameleonic – some have said “opportunist” – Louis Malle has sometimes been slightly despised by critics (3), yet his analysis of urban alienation predates Antonioni’s great tetralogy, beginning with L’avventura in 1960 (4). In fact, Ascenseur pour l’échafaud is a crossroads film in European cinema, looking back to the great French renewal of the crime film by directors like Jacques Becker (5) and Jean-Pierre Melville (6), as well as the formal rigour of Robert Bresson (7); while looking forward to the near-sci-fi modernism of Antonioni, Jean-Luc Godard’s Alphaville, une étrange aventure de Lemmy Caution (1965) and Jacques Tati’s Play Time (1967) (8). The first major sequence of Ascenseur – Julien Tavernier (Maurice Ronet)’s execution of Simon Carala (Jean Wall) – concentrates on virtually silent action and process, and recalls the recent success of Du rififi chez les hommes (Jules Dassin, 1955), with its famous heist; the inexorable focus on plotters undone by their own plots in a technological environment is a domestication of Fritz Lang’s Weimar-era thrillers starring Rudolph Klein-Rogge (9).

Like much of Lang’s work, Ascenseur is a character study – not in the sense of psychological realism, but in observing how character and identity is processed by modernity. The film sees the protagonists usurped from their own narrative by a young couple who also Oedipally murder an obstructive father-figure: Louis (Georges Poujouly) adapts the persona of Tavernier, having appropriated the trappings (car, clothes, gun) that constitute the older man’s identity, rather than his essence. The young couple are in thrall to the romantic clichés of teen culture (films, fashion, magazines) (10). Tavernier’s present actions are defined by his past as a colonial soldier and industrial spy – the film’s basic irony sees a globe-trotting action man stuck in an immovable lift – while Florence’s response to the plan’s failure and her lover’s apparent betrayal is to retreat into the past, revisit the haunts and acquaintances she shared with Tavernier; but this only brings anomie, a stalled narrative, arrest by the police, and eventual exposure.

In fact, in this dehumanising environment, it is only human error, normally repressed by technological modernity, that defines individuality; though even this is qualified when Tavernier’s criminal forgetfulness is imitated by his imitator, Louis, both mistakes revealed by the same means, the identity-dispersing camera. The camera is only the most visible sign of the surveillance society Tavernier and Florence attempt to evade. The first intersection of the two plots sees Louis and Véronique (Yori Bertin) framing and evaluating Tavernier as he gets into his car after the murder; passers-by stare at Florence as she heedlessly walks, “like a madwoman”; a car salesman, a little girl and a paddy wagon full of drunken revellers all intrude on her reverie. Reflections in mirrors, windows and other surfaces combine this theme of watching and estrangement from the self.

The continuing pull of Ascenseur – apart from its “legendary” Davis score (11) – is its combination of fantasy and documentary, a synthesis that would prove potent for the directors of the nouvelle vague (one of whose iconic figures, Jean-Claude Brialy, plays a small role here). Malle began his professional career on Jacques Cousteau’s under-water Le monde du silence/The Silent World (1956), and he would continue filming documentaries in parallel with fiction features throughout his life. Ascenseur is socially and historically precise – the look of modern Paris and its suburbanisation (motorways, a “futuristic” motel [12]); the class tensions articulated through clothes, aspirations, behaviour and locales. Much is made in the narrative of France’s 1950s colonial misadventures and their influence on Tavernier’s motivations (13).

Malle is not usually labelled a fantasist, but he had links with the Surrealists, post-Surrealists and the Theatre of the Absurd, in particular fellow-pataphysician Boris Vian, who introduced him to Davis (14). Even a fantasy considered atypical of the director, such as Black Moon (1975), feeds into more “realistic” works like Lacombe, Lucien (1974) and Milou en mai (1990). The fact, if not the spirit, of Florence’s wandering through Paris echoes the flânerie espoused by the Surrealists and Walter Benjamin. In 1968 Malle filmed the doppelgänger tale “William Wilson” for the anthology Histoires extraordinaires/Spirits of the Dead (1968 [15]); another famous Poe story is referenced in Ascenseur when a black cat ominously witnesses the murder of Carala. Tavernier’s being trapped in the lift updates the fate of all those Poe heroines buried alive (16). Is it the cat, indeed, who performs the magical swap that sees the young couple expropriate the main plot, its roles, its props, and, ultimately, its dénouement?