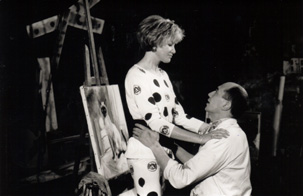 This essay was originally published in Trafic, No. 58 (Summer 2006), pp. 116-8. Reprinted with the kind permission of the author and Trafic.

In Charles Bitsch’s œuvre (1), it is possible to detect three main influences. The first, basically literary, is that of a rebellious mind more or less tied to the immediate post-war period, focused on the search for the bizarre in daily life, close to Boris Vian, to Raymond Queneau, cited by name in the project “Blanchenain et les sept neiges” (2), never shot. We find there talking cars, confronted with the fear of the scrap yard (La Chignole (3), 1986), a dialogue with an aquarium in the same tele-film, wacky psychiatrists – in Le Marteau-piqueur (1981) and in La Chignole, surprising music, with discordant notes, almost figurative, breaking with the tradition of supple transparency, so dear to television, Bitsch’s principal producer (as well as the composition in 1985 of Hugues Le Bars for L’Homme des couloirs), the camera that shakes as soon as we hear the drill, as if it had been screwed in the handle of the camera, the posh restaurant that re-creates the stormy atmosphere on the open sea, the sexual desire that arises from an argument (Le Bonheur des autres, 1990), etc. … An impure cinema, then …

The second imprint is that of Jean Renoir. Like him when he is shooting with Georges Pomiès, Jacques B. Brunius, Lederer, Reginald Owen, Jean-Louis Barrault and so many others, Bitsch gives free rein to unconventional actors, such as Jean Hughes Limes, who gesticulates non-stop, and plays with his very tall and slender body (La Chignole). Bitsch likes to make his actors speak with a cigarette between their teeth. As in Renoir’s Chotard et Cie (Chotard & Co., 1932) or La Carrosse d’or (The Golden Coach, 1952), we find the principle of inversion: the father replaces the son in his marginality and isolation (Le Marteau-piqueur). The son, a lazybones in the beginning, becomes the backbone of the family. The most incapable reveals himself to be the most able, and vice-versa. The strong point of the Bonheur des autres is that Feodor Atkine, classified as a Machiavellian manipulator, becomes a wet rag, manipulated by the average Frenchman, embodied by Yves Afonso, Bitsch’s favourite actor, whom we find again in La Chignole and Jeux de vilains (1991).

The third influence, which is the most important and the most evident remains that of Jacques Tati. Le Marteau-piqueuer seems like a variation on Mon oncle (1958), with the typical French couple, the son – an eccentric figure – who is their exact opposite, and their reaction faced with the pervasive Americanisation. Variant adjusted by an addition of fantasy introduced by a very South-American scriptwriter, Eduardo De Gregorio.

The centre, in Bitsch’s world, is the house, sometimes limited to an apartment. It corresponds, certainly, to a wish for a unique set, which French television, very thrifty, testifies to. But the theme of the house seems too present for it to be defined solely as a limit imposed on the filmmaker. It’s a matter of a domestic, vernacular art, as in Marguerite Duras (La Femme du Gange, 1973; Nathalie Granger, 1972; Jaune le soleil, 1971), as in Manoel de Oliveira, as also in Eric Rohmer sometimes – Conte de printemps (A Tale of Springtime, 1990), Les Nuits de la pleine lune (Full Moon in Paris, 1984) – which will assume more topicality in the decades to come, with the post-petroleum period and the return to a life less boisterous, more at home. The end of the road movie, the opposite of the Bitschian opus (his adaptation of Stevenson’s Reflux, not shot (4), is based on the aquatic house, I mean to say the ship, more than the voyage), just as the excesses of “progress” of the 20th Century have disappeared from themselves – which prove now a big parenthesis, and not a step in an irreversible revolution: the surpassing of the sound barrier appears today, with the failure of the Concorde, like a trend without future, in the image of zeppelins, of asphyxiating gases, of the atomic bomb, of the film-in-relief, and of many other similar shipwrecks. There is an ebb in the cycle, a return towards the domestic universe. That is where everything takes place: the husband passes the wife, who walks in the opposite direction in the apartment’s hall, without a glance. Here is the gist of the drama, of every drama (Le Marteau-piqueur). The subject of the Bonheur des autres is the kid who has transformed the attic into a game-room, and sees his space coveted by the new neighbour, who wants to set up his painting studio there. If it is not the inhabited house, it will be the dream house, the mansion of L’Homme des couloirs. Nothing exists, except the house. Or it will be the cinema studio (Blanchenain) that replaces the apartment in the beginning.

Outside of the house, it’s chaos, or oblivion. After the atomic explosion of Le Dernier Homme (1969), there are no more inhabited houses; it is a kind of end of the world, which establishes a link between the garage with the car wrecks (La Chignole) and the no-man’s-land created after the destruction of the factory (Le Marteau-piqueur). This destruction is all together very present, violent, cruel and ironic.

To speak of the house is also to speak of the family. Family or nothing. Home or bust. It is not irrelevant that Le Dernier Homme ends with a birth, with a delivery in very precarious conditions.

In Bitsch’s world, there is the father, stubborn, old-fashioned, weak despite his obvious tyranny; the mother, a rather silly coquette past her prime, and the children in revolt: the twenty-three-year-old dunce still in the tenth grade (six years behind), a big lump in juvenile golf pants, and the girl mute by choice, as in Yasujiro Ozu’s Ohayô (Good Morning, 1959), who talks with her parents via an intermediary slate board, continued with the mysterious child voyeur in L’Homme des couloirs. 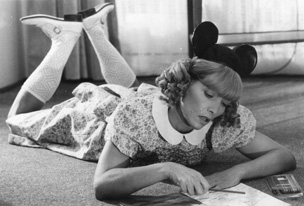 What is great in Le Marteau-piqueur is that the stupidity of the relatives is passed on to the parents, as if by osmosis, the father rendered infantile by his submission to his boss, poorly compensated, the mother overtaken by a return to childhood, a normal outcome for a woman who thinks only of being younger, an evolution that is given a concrete expression – another strong point – not by the dialogue, but by the costumes and postures. It’s up to the spectator to discover for himself this regression. It’s as if in the family, there was a constant amount of childish behaviour, which slips, like a noria of communicating vessels, from one character to another. Regression created at heart by the submission to the social order or by the usual female drives, reflected in a different way on the children, and returning to the initial situation. The object under the bed – a jack-hammer or something else – clearly shows that it is a question of a sexuality that is either deviant or unsatisfied. Monique, the girlfriend of the retarded son, loves him beyond all reason, but isn’t it to satisfy her vocation for matriarchy? Unless it is the simple taste for the absurd … In Blanchenain, there is no family in the proper sense, but we make out very easily the family on show, very alive, à la Renoir.

Bitsch is after all one of the rare filmmakers of the family, along with Maurice Pialat and Bertrand Tavernier. In the first, the family is synonymous with drama. In the second, it is more nostalgic, the need for the familial bond, of the child or the father: L’Horloger de Saint-Paul (The Watchmaker, 1973), Daddy Nostalgie (1990), La Passion Béatrice (Beatrice, 1986), Holy Lola (2004). We find this too in Bitsch, but with a clearly more ironic attitude, the resort to effects, to technical tricks offering a distance that protects Bitsch from his old-world values.

All photographs from the collection of Charles Bitsch. All rights reserved.