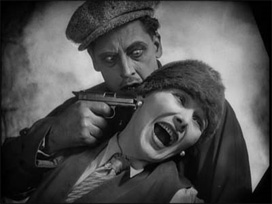 Dr. Masimoto: Nothing is to deter a man from the path of duty… not even a woman…

Spione is Fritz Lang’s most joyous film; it partners sombre content with playful form to choreograph what Geoffrey O’Brien called “a quadrille of chaos” (1). In some ways it is Lang’s North by Northwest to his Metropolis’ Vertigo. Both Spione and North by Northwest (Alfred Hitchcock, 1959) were conceived as popular entertainments in response to the commercial failure of their predecessors, though Metropolis (1927) and Vertigo (Alfred Hitchcock, 1958) are now each director’s most scrutinised work. Both films offer rollicking espionage narratives, with compendia of plots, motifs and characters from previous films pushed to excess, even parody. In both films, an amiable, but callow and complacent young bachelor achieves maturity by manoeuvring a morally ambiguous blonde beauty away from a sinister, super-sophisticated father-figure.

The emblematic sequence of Spione takes place in the third reel, as secret agent no. 326 (Willy Fritsch; the unnamed protagonist is an ironic hangover from the dehumanised minions of Metropolis [2]) follows Russian émigré Sonya Baranilkowa (Gerda Maurus) to the apartment building (in which she is paying a traitor, Colonel Jellusic [Fritz Rasp], for military secrets), in front of walls pasted with posters advertising Metropolis. This self-reflexive gesture at once affirms the authority of Lang and screenwriter Thea Von Harbou, alludes to the real-world notoriety of the over-budget spectacle of that film, and either breaks the illusion of Spione’s film world, or allows it to spill into ours. This refrence is uncharacteristically overt for Lang, but it is part of this film’s jeu d’esprit, as compared to the ponderous social diagnoses of the earlier film.

In the next scene, 326 searches Sonya’s apartment by torchlight. Earlier that day, the couple had expressed their love for each other in a scene, at once affectionate and sly, that belies Lang’s reputation as a cynical geometrist shifting marionettes across immovable grids. Tom Gunning has suggested Spione marks the “new importance of erotic desire” in Lang’s work (3). Now the apartment, once ornately decorated with Russian bric-à-brac, has been stripped bare, convincing 326 that what he thought was genuine passion was merely a master spy’s game-playing. In this case he’s wrong, but his conclusion is consistent with a world so profilerating with disguises, performances, costumes, artifice and stages that every background extra seems to be spying on someone else, poised to enter the narrative.

The film’s exquisite tension partly arises from this demystifying of facades, forcing the viewer to scan each abruptly shifting frame for some key to what’s really going on in a scene or sequence. It’s mostly, however, due to Lang’s mastery of editing and composition. During the late 1920s, Lang had proved himself such a master in breaking down sequences – often across large stretches of space – into meticulously linked and timed units, that by Spione he is almost flaunting his facility, eliding scenes through the use of motifs (e.g. the bracelet Sonya decides to give 326; after a close-up from her point-of-view we cut to her later that night handing it to him in his car); cutting to characters as they’re mentioned in the narrative; or introducing back-stories, flashbacks or digressions, often hilariously fabricated, as in nympho-agent Kitty’s (Lien Deyers) story of her unhappy home, cueing shots of a brutal, whip-wielding father, and a fat, leering alcoholic mother (4). A second source of tension concerns Lang’s control of space and movement, suddenly animating tableaux into action and vice versa, creating a pattern of action and stasis centring on the figure of Haghi (Rudolf Klein-Rogge, Lang’s disquieting altar ego in the Weimar period), the disabled crime lord tied to his desk, forcing the pace of events around the world.

Spione can be read as a remix of Lang’s earlier and most influential crime saga, Dr. Mabuse der Spieler (1922), with which it shares more than a leading man. A comparison of each film’s opening scene reveals their essential difference in spirit. Both sequences feature the planned theft of vital documents, and the prominence given to transport and modes of communication. In the first film, Mabuse is placed in the centre of events – he opens the film, shuffling cards showing his many disguises; he uses a telephone and stopwatch to monitor and link the three spatially disparate elements that contribute to the successful heist – the theft of the briefcase on a train, the relaying of the documents onto a passing car, the man at the telephone wires conveying messages between Mabuse and his minions. The repercussions of this sequence ripple throughout the rest of the chapter, with Mabuse (deliberately recognisable to the viewer, though in disguise) manipulating the stolen document in order to profit from a destabilised stock market. In other words, there is a narrative and character coherence in this section in which motive, action, context and consequence are all clearly laid out (5).

Virtually every writer on Spione feels the need to describe the unprecedented opening montage, perhaps because this act of writing summons it pleasurably again and again to the mind’s eye. It is a bewildering, exhilarating sequence, where coherence is “disjointed” and “choppy” (6). Disembodied hands take documents from a safe – this is shot like a theft, but the action may be legitimate. A leather-suited and masked man on a motorcycle is shown revving up and sneering from a low angle. A spruce diplomat seated in the back seat of a car is shot in the back by a carload of masked assassins (one of the film’s many nods to Feuillade’s serials [7]). News is transmitted through radio and press; paper-laden bureaucrats react hysterically and impotently. An informer is shot before he can give information. The rapid editing and as yet uncoordinated fragments of information build up to a pitch when the question is asked, “Who is behind all this?” Only at the end of the sequence is this revealed. Mabuse’s power, though wide-ranging and lethal, is limited to his person; Haghi’s ultimately is too, but because he is unidentified throughout this sequence, it seems vaster and more omnipotent, as he manipulates a network of communication modes and languages. He is in fact so powerful he could be considered the film’s auteur – he stages every sequence even if he’s not physically present, and when he dies the film abruptly expires with him (8).

Though he was made up to look like Lenin or Trotsky, and there are camp suggestions that he leads an international communist ring, it’s tempting to see this anti-hero through the filter of Siegfried Kracauer’s From Caligari to Hitler thesis (whereby Weimar cinema is said to herald the Nazi nightmare to come) (9), with Haghi and his uniformed agent provocateurs destabilising the machinations of an incompetent democracy, presumably so he can seize power, rather than out of mere financial gain. Such is his magnitude, and despite his very human fits of temper and barely suppressed sexual energy (directed mostly at Sonja), that it’s a lovely, almost Ealing-esque touch when he’s brought down by the pedantic persistence of a doddering bureaucrat, rather than the might of a massive state apparatus (10).

I have called the experience of watching Spione “joyous”, and it would be easy to dismiss the film as “superficial, glamorous, charming but ultimately vacuous entertainment” (11), but as Geoffrey O’Brien suggests, “between the frames, I catch glimpses of other episodes – scenes from the other movie, the external one – that could slot so effortlessly into Lang’s scheme” (12). Of all the film’s reverberating echoes and rhymes, perhaps the most chilling is the match between the manky hand print left by 326, in his Chaplin tramp disguise, on his swish hotel armchair, played for social comedy, and the bloody print left on a murdered Japanese courier’s package.

Spione was restored during 2003 and 2004, one of many Weimar classics conscientiously renovated by the Friedrich-Wilhelm-Murnau-Stiftung through extensive research and co-operation with international repositories. There is no surviving original negative of the film; and although it’s not as obvious as it is with their version of Metropolis, where large swathes of lost footage are replaced by text and stills, the unified appearance of Spione is in fact an illusion; this “restored” print is cobbled from those surviving in archives across the world in places such as the Czech Republic, Russia and Australia. Martin Koerber explains how, during the Weimar period,

The parallel production of several negatives was a perfectly common practice…. These original negatives, shot parallel, originated from several cameras that were placed side by side during shooting, or were a montage produced from a number of different takes of the same shot…. When reconstructing films of which there are only incomplete extant copies… multiple versions [are] a curse for variants such as performance, camera position, length and continuity. (13)

This has thorny ethical issues, as Koerber points out (14), but a film whose surface integrity hides a Frankenstein-like patchwork of materials is also the perfect image of the “disguised and duplicitous spaces” Gunning sees as indicative of Lang’s universe.