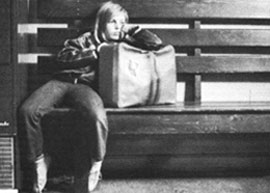 The substantial increase in the number of film festivals in recent years in Spain is doubtless an interesting case of study. In the last ten years, Málaga (launched in 1998), Las Palmas (2000), Sevilla (2004), Documenta (2004) and Punto de Vista (2005) film festivals have joined the veteran cities of San Sebastián, Valladolid, Huelva and Sitges. Gijón International Film Festival was created four decades ago but has lately been transformed into a more ambitious meeting place for cinema aficionados. Similarly, these young festivals (particularly Sevilla and Las Palmas) are trying to set their program selection in accordance with a more in-depth perspective, and give their programming a complete overview of the international world cinema so shamefully neglected by mainstream exhibition.

Although it is not the objective of this review to examine the film festival’s evolution in Spain, it might be interesting to note that Gijón International Film Festival was founded in 1962 as the Certamen Internacional del Cine Para la Infancia y la Juventud, (International Film Contest for Children and Youths). (1) Nowadays Gijón appeals to adult connoisseur audiences; however, these origins are still visible in its 45th edition in a remarkable effort to integrate young audiences. The creation of a jury composed of 50 young members is a relevant proposal in this endeavour. In addition, 15,000 primary and secondary school students are invited to Enfants Terribles, a wide selection of quality films especially designated for them. Nevertheless, screenings are in the original version with subtitles, something new for them since audiences in Spain are used to dubbed screenings. In order to arouse their interest in films which otherwise they would hardly ever hear anything about, 6 to 12 and 13 to 18 year-old spectators attend the screenings and evaluate the films. They are given the opportunity to vote and select the best two films from a range of 15 quality feature films from 15 different countries which have been recognised at prestigious festivals such us Sundance, Locarno or Berlin, among others.

Proof of the success of this partially youth-oriented Festival was the screening of This is England at a crowded Jovellanos Theater. Hundreds of high school students attended a morning session while some press colleagues complained at the beginning about their noisy neighbours, but Shane Meadows’ film quickly earned the young audience’s respect. Set in the early 1980s under Margaret Thatcher’s government, the film focuses on a 12 year-old protagonist who joins a neo-Nazi incipient group to honour his father, dead in action in the Falklands. The audience’s response to this film was poignant and very illustrative of the sound critical sense of these novice viewers. A similar reaction followed the screening of Jason Reitman’s Juno, nominated for four Oscars and awarded the top prize by the Young Jury. The educational program in Gijón culminated with the publication of a didactic guide, and with a number of Oficios de Cine (conferences for teenagers about different jobs related to the film industry given by professionals). 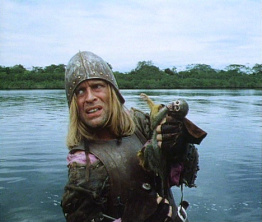 In the section of the Festival oriented to the general audience, the main retrospective was dedicated to films from the so-called New German Cinema. According to film historians, the movement officially began at Oberhausen Short Film Festival where several young filmmakers signed a Manifesto (1962). Nevertheless it would be probably more accurate to say that filmmakers such as Alexander Kluge, Jean-Marie Straub, Danièle Huillet, Volker Schlöndorff, Wim Wenders, Rainer Wender Fassbinder, Werner Herzog and Peter Hadke, among others of the same generation, shared a need to break free with a disturbing past and, luckily, their works were supported by various cultural institutions in the mid ‘60s and early ‘70s. Gijón screened some of the key films of the New German Cinema, such as Alice in den Städten (Alice in the cities, Wim Wenders, 1973), the intra-European road-movie about a writer and a little girl, and the applauded Werner Herzog film Aguirre, der Zorn Gottes (Aguirre, Wrath of God, 1972), which depicts how the megalomaniac Spanish conqueror Lope de Aguirre (interpreted by Klaus Kinski) lost his mind in his futile search to the mythic El Dorado. However, the greatest achievement of the New German Cinema retrospective was its presentation of rarely-screened films. It would take another review to adequately cover all those diverse films so I will only refer to a few of them. Gijón programmed Jean-Marie Straub’s Chronik der Anna Magdalena Bach (Chronicle of Anna Magdalena Bach, 1968), giving this film the recognition it somehow did not receive when it was first released. It is an unusual biopic based on the reconstruction of Bach’s musical biography. Narrated by his wife Anna in voiceover, its original storyline structure using live recording of performances is one of the best aspects of this film. Also attractive was Nich der Homosexuelle ist pervers, sondern die Situation in der er lebt (It’s not the Homosexual Who Is Perverse but the Situation in Which He Lives, 1970) by Rosa von Praunheim (pseudonym of Holger Bernhard Bruno Mischwitzky), activist for the gay movement. Also replaying leading themes of the homosexual strain, but more concerned with a fine psychological study, is Rainer Werner Fassbinder’s Die Bitteren Tränen de Petra von Kant (The Bitter Tears of Petra von Kant, 1972). Based on his own play, Fassbinder composed a striking visual design work that reinforces the depiction of the intricate relationship of love and power among three women.

The selection of documentaries, a usual section in many recent festivals, was probably the best part of Gijón Film Festival. In this sense, an illuminating film in the running was Serbian Epics (1992), a terrifying portrait of Radovan Karadžić, currently a fugitive indicted for war crimes by the International Criminal Tribune in The Hague. Polish filmmaker Pawel Pawlikowski travelled across former Yugoslavia in order to interview Karadžić pretending to be a naïve journalist interested in Serbian traditions. He finally contacted him in his headquarters and the result is a fascinating documentary which reveals Karadžić’s human side as psychiatrist and poet apart from his delirious nationalistic viewpoint (he justifies ethnic cleansing). The Austrian-Spaniard co-production Hafnerparadise (Hafner’s Paradise, 2007) shares a similar purpose and is perhaps even more provocative. At first, the documentary seems be a sympathetic portrayal of a sportive and well-mannered octogenarian living in a luxurious Madrid neighbourhood, but soon afterwards the audience discovers that Paul Hafner is an ex-Waffen-SS officer at Dachau concentration camp who took refuge in Spain under Franco in 1945. Günter Schwaiger’s film presents a variation on Claude Lanzmann’s pointed lessons in Shoah (1985), when filming those involved in the Holocaust. Paul Hafner’s confrontation with Dachau survivor Has Landauer in the most intense scene of the film. Against all expectations, Hafner does not feel any shame and we learn that his paradise is not Spain but the fantasy he’s created to cope with his immoral acts.

Awarded at Locarno, Seule avec la guerre (2000) by Danielle Arbid also deals with victims and murderers. The Lebanese Civil War (1975-1990) and its consequences are a frequent motive in her films. In this documentary, Beirut – a prosperous vibrant city before the war – appears in ruins, but although the traces of a recent war are evident, citizens pretend that it never occurred and deny their part in it. No sculpture commemorates the deceased. Nobody wishes to recall the facts. Arbid tries in vain to reconstruct Beirut’s historical memory. 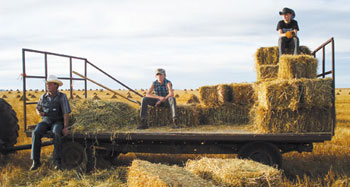 The festival also chose to program a tribute to Carlos Reygadas, an unusual choice since the Mexican filmmaker has only directed Japón (2002), Batalla en el cielo (2005) and Stellet Licht (2007), three different films that are in essence quite similar. The main protagonist in every film is a desperate middle aged man who finds support in a woman. She helps him to overcome his crisis, though the consequences for her are fatal. Only Stellet Licht, also known as Luz silenciosa (Silent Light) offers a variation in the climax scene with an unresolved end.

In Japón, a painter travels across rural Mexico with the sole intention of finding a place to die. The story focuses on the renaissance of a man thanks to female intervention through sexual intercourse. As Reygadas pointed out in his presentation, the title “Japan” alludes to the Japanese flag, a symbol for regeneration. Regeneration in this case occurs through crude sex between the artist and an old woman who generously hosts him in her poor home surrounded by the wasteland.

If in his previous film there was an obvious contrast between an educated, urban, European-looking man and the rural, unsophisticated, indigenous-looking woman, likewise, other drastic oppositions apply in Batalla en el cielo (Battle in Heaven), his second film. This time Reygadas turns to the Mexican metropolis where, again, radical class, gender and race contrasts are present, and the explicit sex scene acts as a catalyst for the drastic resolution. In my view, the basic oppositions referred to in Batalla en el cielo undermine the strength of the story, and this seems to be a lesson learned in the case of his last film Stellet Licht, the Jury award winner at Cannes 2007. On the contrary, the best aspect of this film lies in the effective way the drama is portrayed in a classless society. Although similar approach and style are noticeable in Stellet Licht – particularly the preference for non-professional actors and actresses – the egalitarian setting reinforces an extremely powerful story. Set in Chihuahua (Northern Mexico) in a closed Mennonite community (a branch from the Dutch Reformed Lutheran Church established in Mexico in the 16th century) and filmed entirely in a Dutch dialect, Stellet Licht deals with temptation and depicts the anguish of a married farmer who falls in love with a woman from the same community. The beauty of rustic landscapes in an almost utopian environment underlines the anguish of Johan, the adulterous family man who feels trapped between the loyalty to his wife and children and a devastating passion. Interestingly enough, Johan’s conflict is not the typical one between social control and individual freedom: neither his faith nor the social constraints are the real obstacles in the film, something that, in spite of the outdated surroundings, lets audiences easily relate to Johan’s character.

Gijón Festival is organised by the City Hall and mostly funded by regional sponsors along with European MEDIA financial support. Despite the great job done by the programmers in their wise selection and the ambitious and heterogeneous program, one could object that the part played by the political authorities in the organisation undermines the impact of the event. Local authorities were more interested in showing off their display of means among the locals than in helping Gijón Festival become a point of reference for audiences interested in out-of-the-ordinary world cinema. This is not new, and it is unfortunately a common situation at many other Spaniards festivals. Nevertheless, Gijón remains without doubt a remarkable film festival. Notwithstanding the deficiency mentioned, visitors will benefit from a good range of quality films as well as the pleasant atmosphere of this town on the Atlantic coast.

The author would like to thank Mary Dellenbach and Jose Camino for revising the English.