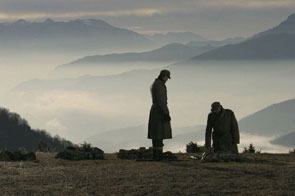 Films from Eastern Europe were once a staple of art house cinema. Today one could be forgiven for wondering if they’re still being made in any quantity, and if the former Eastern Bloc countries are merely bases for runaway productions. But proof that indigenous cinemas have indeed survived the break-up of Eastern Europe and the Soviet Union, and the consequent flooding of cinemas with Hollywood product, is provided every year by the Cottbus Film Festival, now in its 17th edition, which offers a uniquely comprehensive overview of film production from the whole of central and eastern Europe, and indeed beyond. Founded in 1991 by members of the GDR film club movement, it has grown to become the region’s most important cultural event.

This year, around 80 features and shorts from nearly 30 countries were shown over five days in this city about 100 km south-east of Berlin and 30 km from the Polish border (just over which the events depicted in The Great Escape took place). It feels suitably remote – if you arrive at night by train, as I did, you soon realise why the eastern part of Germany is sometimes referred to as “the land of darkness”, and the spooky feeling which such all-encompassing blackness eventually engenders is further enhanced when you notice that station names are starting to appear in another language besides German. This turns out to be Sorbian, the language of the smallest Slavic minority in Europe, and Cottbus itself (which is also known as Chośebuz) is home to the largest bilingual community in Germany. Indeed, the student jury at this year’s event presented their prize in Sorbian.

Geographically and culturally situated as it is, then, Cottbus is ideal for a film festival of this kind. The centrepiece is obviously the feature film competition, but the festival also organises some extremely interesting retrospectives. Last year, for example, the subject was Sorbian films, and this year it was films made in and about the Land Brandenburg (in which Cottbus is situated) since 1946. 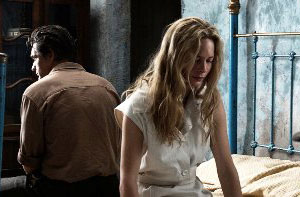 So interesting, in fact, were the films in the retrospective (about which more in a moment) that, by comparison, some of the films in the competition, which contained ten films from countries as varied as Kyrgyzstan, Serbia, Russia, Hungary, the Czech Republic, Bulgaria, Georgia and Poland, did seem a bit slight. The prospect of a co-production between Croatia, Bosnia and Herzogovina, Kristijan Milic’s Zivi I Mrtvi (The Living and the Dead), showing the continuities between the conflicts in the area during WWII and the break-up of the former Yugoslavia, seemed promising, but unfortunately didn’t get far beyond telling us that war is hell. Meanwhile, too much of Aleko Tsabadze’s Russkij Treugolnik/Rusuli Samkudhedi (The Russian Triangle), which concerned the ripple effects in Moscow of the Chechnya conflict, played as a thriller (and a not terribly convincing one at that), although it did contain a striking portrayal of the wretched state of Russian veterans of the campaign. Much was expected of Andrei Zvyagintsev’s Izgnanije (The Banishment) on the strength of his debut feature Vozvrascheniye (The Return), but although this was an intensely atmospheric and brooding study of long-gestating tensions and problems gradually welling to the surface during a family holiday in a remote old country house, it finally felt contrived and over-stretched (particularly at two and a half hours).

Paradoxically perhaps, it was two films which, on paper at least, sounded quite slight which turned out to be nothing of the sort. In Andrzej Jakimowski’s Sztucki (Tricks), a young boy begins to think that a man whom he regularly sees at the railway station may be his long-lost father. This child’s eye view of adult life set in a sleepy Polish town during a hot summer has a good deal of the charm of the Czech cinema of the 1960s, and the performances of the young boy and his older sister (desperately learning Italian in order to try to get a job with an Italian company which has set up locally) are particularly natural and likeable. Amusing and engaging, but with a distinct undertow of sadness too, the film works extremely well both as a straightforward story and, in an entirely unforced way, as a picture of life in contemporary small-town Poland. Cinematically, however, it was in a different league from Vera Storozheva’s Puteschestwije S Domaschnimi Schiwotnymi (Travelling with Pets), which walked off with no less than five prizes. At its heart is a radiant performance by Kseniya Kutepova, almost unbelievably making her screen debut here, playing a young woman who, finding herself alone when her railway worker husband dies, begins to experience her surroundings as if for the first time, and gradually establishes a new, if strange, life for herself. Described thus, the film really does sound slight, trite even, but right from the very opening shots one is immediately struck by the freshness and originality of its vision. Of course, the trackside setting lost deep in the vast expanses of rural Russia would be a gift to any filmmaker with even half an eye for landscape, but Travelling with Pets is much more than simply picturesque. As we accompany Natalie on her voyages of discovery, we too, thanks to the transformative power of cinema, begin to discover the world anew. And you can’t say that about too many films these days. 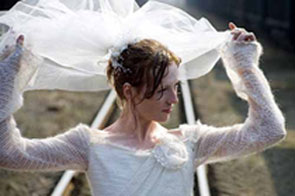 But back to the retro – at which, revealingly I fear, I was usually the only non-German member of the audience: indeed, I was publicly thanked at the end for my attendance! Few film festivals devote time and effort to exploring cinematic representations of their own localities, too often taken up as they are with exotica from elswewhere, so it was a pity that so few foreign visitors took the opportunity to learn through cinema a little more about where they were – not least because Brandenburg, one of the oldest German states, founded in 1157, has a long and fascinating history as a region poised between East and West. As such it has frequently been a field of battle and contestation, but also a point of intersection for different cultures and ethnicities in the heart of Europe. Debates about immigration have a long history here.

In the twentieth century, Brandenburg underwent the same traumas as the rest of Germany. But after WWII, by which time it was part of the German Democratic Republic, its geographical position meant that it played a particularly important role in the proces of re-settling both those fleeing the bombed cities and those German-speakers expelled from Czechoslovakia and Poland. This episode was explored in Milo Harbich’s fascinating documentary drama Freies Land (A Free Country, 1946), the second film produced by DEFA, and a real discovery, whose heroic yet poetic images of agricultural endeavour caused one of my colleagues to exclaim that it was like a cross between Eisenstein and Ford. In this film, the newcomers were generally welcome, but less so in Arthur Pohl’s rather more melodramatic Die Brücke (The Bridge, 1949, not to be confused with Bernard Wicki’s 1959 film of the same name), the latter reminding us that dislike and suspicion of outsiders and refugees (a common theme of many of the festival films, and of Ann-Kristin Reyles’ Jagdhunde [Hounds] in the retrospective) is, unfortunately, by no means a new phenomenon.

Of course, today the eastern part of Germany faces exactly the opposite problem – depopulation. The sense of people literally ebbing away is nicely caught in the first half of Andreas Kleinert’s Neben der Zeit (Beside the Time, 2005), that is until it seems to decide that it wants to be Pasolini’s Teorema. Depopulation is also one of the themes of Uckermark (2002), one of a series of portraits of the rural east by Volker Koepp, who worked for DEFA from 1970 to 1990 and has continued ever since to add to his truly quite remarkable oeuvre. The subject of a huge retrospective at the Leipzig documentary festival in 2004, with five of his films available on DVD in Germany from Edition Salgeber, Koepp remains relatively unknown abroad for such a major contemporary filmmaker. Not unlike a German Mike Grigsby, Koepp’s great strength is that he gives his subjects time and space to speak, and also situates them within the landscapes in which they live – beautifully and evocatively captured by his regular camerman Thomas Plenert. Koepp’s most recent film was in the main body of the festival (though not unfortunately in the competition). This was Holunderblüte (Elder Blossom), set in Kaliningrad, the desolate and increasingly forgotten Russian enclave between Poland and Lithuania on the Baltic Sea. A portrait of a country rapidly turning into a wilderness, many of whose inhabitants have turned to drink in response to their almost complete abandonment, it is told entirely through interviews with children and young people. However, far from being depressing, it is a story of quite extraordinary resilience and courage in the face of what appear to be almost insuperable odds. Like so many films at Cottbus, it deserves a far wider showing than it will probably receive.