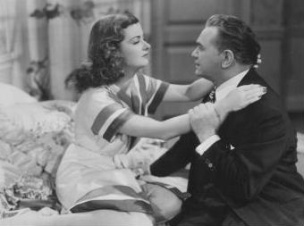 What happens to a dream deferred?

Or does it explode?

“You’re old and ugly and I’m sick of ya! Sick, sick, sick!” These are some of the last words that Kitty March speaks before Christopher Cross (Edward G. Robinson) stabs her with an ice-pick. The dream has exploded for both of them, and Scarlet Street, could, for some, easily end here. But it doesn’t. The fall-out from the dream has to be dealt with. By now, it is commonplace to talk about film noir as having an “underlying mood of pessimism which undercuts any attempted happy endings… more than lighting and photography, it is this sensibility which makes the black film black for us” (2). But there is something more at the heart of Lang’s film: it seeps into the very atmosphere of its world, into the film itself; a combination of nastiness and poisoned hope, which goes beyond the word “pessimism”. It is the festering sore of dreams undone. All of the primary characters have them, no matter what a viewer of this film might think of the characters themselves: Chris Cross longs to be a revered painter (3) and to escape from his harridan wife, Adele (Rosalind Ivan); Adele, shrill and emasculating as she may be, longs for her first husband, Homer, whose “bank-art” portrait looms over the apartment that she and Chris share, and each week goes to a friend’s apartment to listen to the “Happy Household Hour”. When Homer returns, the once pride of the police force is a sodden drunk, and his welcome home (more a break-in) is a terrified shriek from Adele.

Kitty wants the lush life with her boyfriend-pimp Johnny (Dan Duryea). Bu they are essentially children, as indicated by the casual cruelty they sometimes inflict and the dialogue they exchange: “Jeepers, Johnny… I love you”, exclaims Kitty, while Johnny likes “Holy cats!” and purrs out his pet name for Kitty, “Lazy Legs”; Duryea’s distinctive voice drawling out the a in “lazy”. Johnny also dreams of some big score, Hollywood perhaps, or a partnership in a garage where he can eventually muscle out the other players: “Jeepers! The pipe dreams you have”, says Kitty.

Enter Christopher Cross. More than anyone in the film, he lives in and for his dreams; they become the “way…[he] shape[s] reality” (4). He’s the conduit for the rich life that Kitty and Johnny want, and his relationship with Kitty means that he no longer has to wonder “what it’s like to be loved by a young girl”.

Kitty also likes music, and the song that we most often hear when she’s got the record player on is “Melancholy Baby” (5). The needle sticks, the record skips, and we hear the word “love” over and over, droning, “the syrupy sweet” dream waiting to explode. What we often also hear in Kitty and Johnny’s world are slaps: the distinct sound of a hand on a face. The film implies that Kitty seems to enjoy these slaps, that they offer proof that Johnny really loves her; that Chris doesn’t smack her around brings her disdain.

Chris has a language all his own: his voice halts, as if he goes for long periods without speaking; his voice also comes out in a rasping rush when he finally discovers what amounts to a primal scene (for him, anyway) – Kitty and Johnny together, obviously more than friends.

Chris insists on Kitty marrying him; she couldn’t possibly love someone like Johnny: he’s Evil, and she’s pure innocence. He thinks he knows this. And, for the first and last time, Kitty turns her bitter scorn onto Chris, with the shrill, high laughter of a teenager, and the implication that Chris is no man, certainly not one who could kill Johnny. She’s a child right up to the end, cowering under the satin bed cover as a bogeyman with an ice-pick approaches. She isn’t laughing anymore.

But this isn’t the last that we hear of Kitty, or of Johnny, who’s arrested and prosecuted for the murder, and eventually sent to death row and the electric chair. “Somebody, somebody give me a break!” Johnny screams, right before the end. Chris has gone free, but his head is filled with the both of them; whispers and laughter, and in what is perhaps the film’s most extraordinary sequence, from an aural and visual standpoint anyway, Chris disintegrates, as Kitty and Johnny keep up a malignant sing-song in his head: “Jeepers, Johnny… I love you… he brought us together; he killed… Lazy legs.” This is the record that has become stuck. The words become a torrent and a torment as Chris circles his rented room, the neon light outside pulsing like a vein. He hears Kitty’s mocking giggle. It’s too much, and he attempts to hang himself.

By the end of the film, it’s five or six years on from this scene. Chris is homeless, his body curled in on itself, the voices still insistent. He sees his portrait of Kitty being packed off and sold for $10,000. The dream is rotten. The dream is dead.