As with many film festivals around the world, the 2022 Fantasia International Film Festival, its 26th edition, was a grand return to in-person moviegoing, following an entirely online version in 2020 and a mostly-online one last year. That energy was palpable at each and every screening, despite various hurdles and on-the-fly changes necessary due to the ongoing pandemic. If nothing else, it was an opportunity for fans of genre cinema to come back together and celebrate the weird, the grotesque, and the horrific.

John Woo was given a well-deserved lifetime achievement award, given to him at a screening of Hard Boiled (1992) (Face/Off [1997] was also screened). At an artist talk the following day, Woo reflected at length on his early years in the Hong Kong film industry, and how his connections and relationships with people like Tsui Hark, Jackie Chan, Chow Yun-Fat, and Raymond Chow buoyed his career in an environment of deep collaboration. Prone to delightful rambling on the minutiae of these friendships and the development of his films, Woo held the audience in rapt attention – you could hear a pin drop while he spoke of Tom Cruise’s professionalism, and riotous laughter when he explained that Jean-Claude Van Damme insisted on camera angles that showed off his muscles, but “Tom never asked for that.” 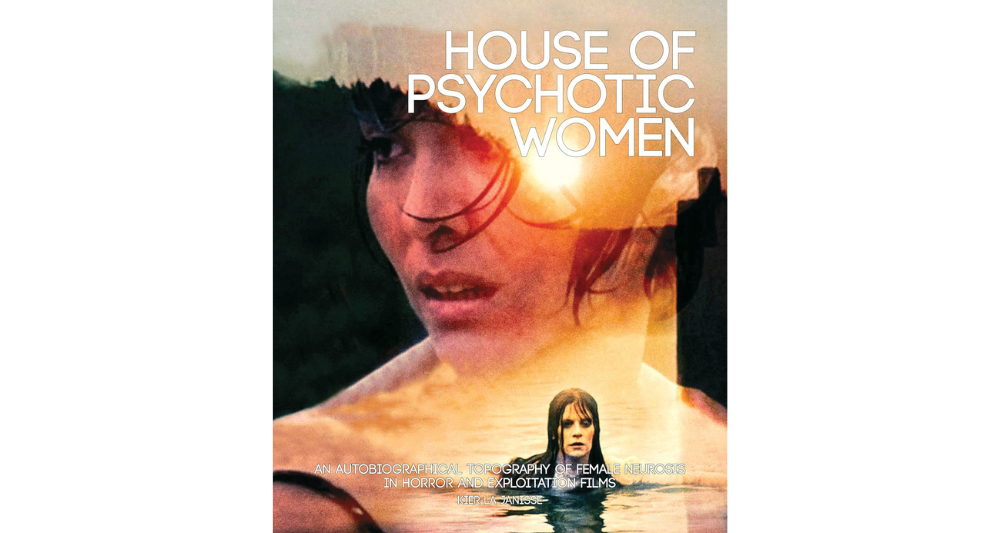 There is always too much to see, especially at a festival that lasts for a full 21 days, so one must make tough calls in prioritising what to make time for. My own interest, particularly at a festival such as this, led me to many of the restorations and special screenings of classic or under-seen films being celebrated or re-appreciated. Top priority was a collection of films organised to celebrate the tenth anniversary of Kier-La Janisse’s landmark book House of Psychotic Women, a notable “topography of female neurosis in horror and exploitation films” that launched a new, expanded edition at the festival, with writing on an additional 100 films (some of which have been released since the book’s publication, and even inspired by it). The boutique distribution company Severin Films restored four films that are in the new edition and screened them at the festival with Janisse in attendance to introduce and sign books: Il Demonio (Brunello Rondi, 1963), Identikit (Giuseppe Patroni Griffi, 1974), I Like Bats (Grzegorz Warchoł, 1986), and Footprints (Luigi Bazzoni, 1975). 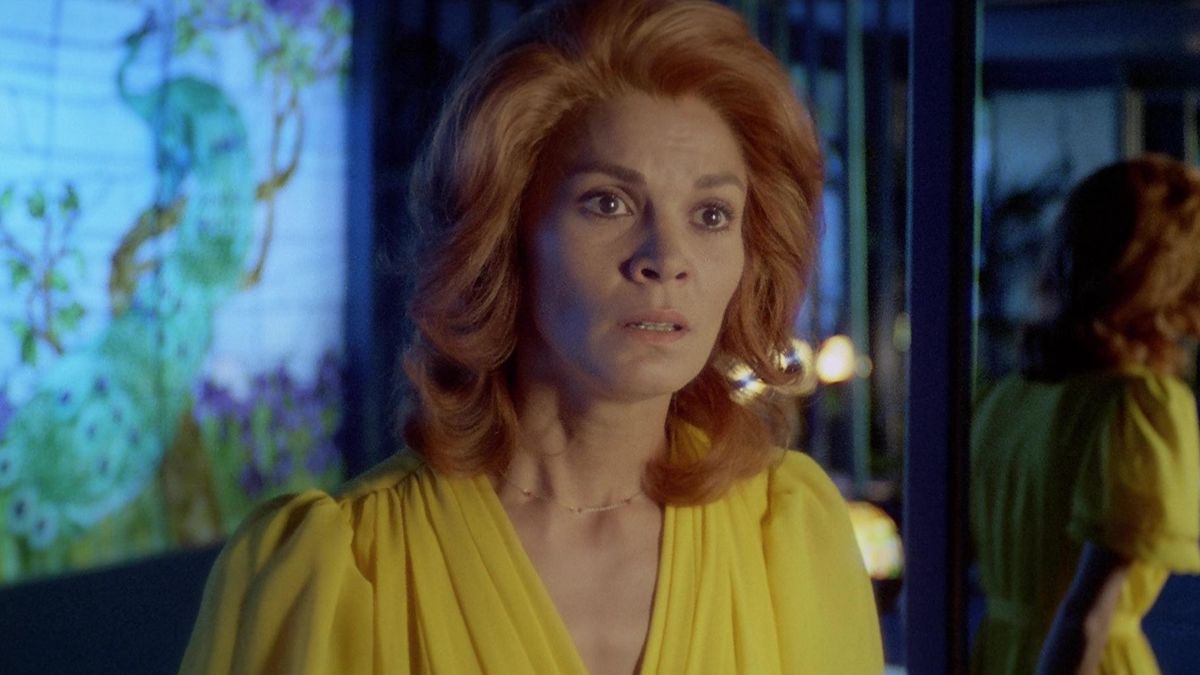 Footprints, also called Footprints on the Moon, was a standout. Brazilian actress Florinda Bolkan plays a translator who is haunted by images of a strange, old sci-fi film she saw in her childhood (Klaus Kinski stars in these fevered, silly inserts). One day, she awakes at home to discover that she has no memory of the previous three days, and begins the strange journey of piecing together what happened. It’s a sort of giallo-adjacent slow burner, interested in maintaining an intense air of mystery throughout without being overly concerned about coherent explanations. Indeed, it is rather melancholic, as we follow Bolkan’s meditative trip to a rural town she may or may not remember, encountering people she may or may not have once known. It helps that the film is shot by the great Vittorio Storaro (Apocalypse Now, The Conformist), who grants each frame a surprising beauty, full of golden sunsets and lush landscapes, helping to disorient us alongside Bolkan as she’s pulled between this natural serenity and her frustratingly elusive missing time. 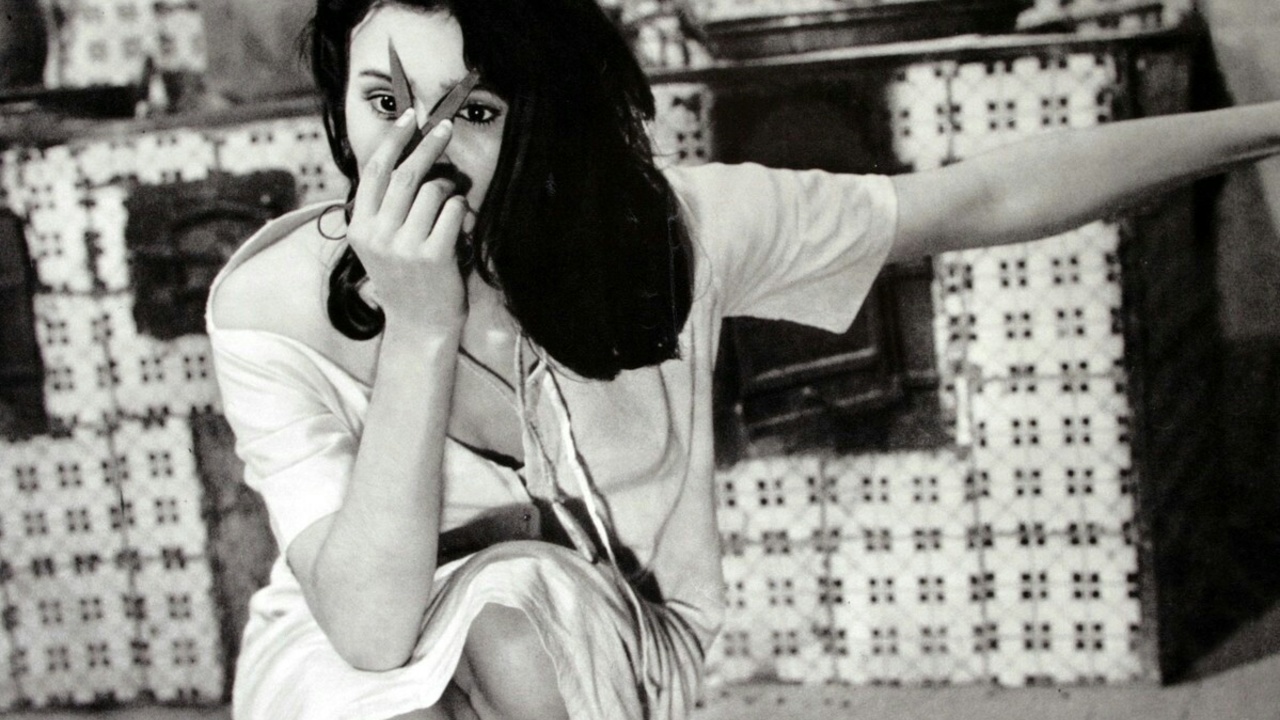 Almost as good was Il Demonio, a neorealism-adjacent folk horror film that was also included in Severin’s 2021 folk horror collection All the Haunts Be Ours, organised around Janisse’s acclaimed documentary of the same year, Woodlands Dark & Days Bewitched. The director Brunello Rondi is best known for his collaborations with Federico Fellini, having co-written 8 ½ and La Dolce Vita, among others. This isn’t really that interesting apart from the fact that Il Demonio was released the same year as 8 ½, which at the very least provides a stirring juxtaposition, as the former takes an entirely different approach to subverting and playing around with neorealist technique. It’s a somewhat familiar story, a woman accused of being a witch and intimations that such a thing is a perfectly rational response to a world of oppression, patriarchy, capitalism, and submission. The film sets itself apart by using our expectations of neorealism to draw us into her subjectivity, emphasising the artificiality of sociocultural rituals and the reasonable “psychotic” reaction of their target.

Tied into this series was a screening of Marina de Van’s unnerving In My Skin (2002), a notoriously disturbing viewing experience about a woman who develops a taste for her own flesh. Like Il Demonio, the film seems to suggest that this makes a certain amount of sense – everyone in her life seems to want a piece of her, so how else to keep some for herself? Within the alienation of a postmodern bourgeois world straddled by misogyny, it is all too easy to lose a connection with your body, and desperation sets in. Make sure you have a strong stomach before you watch, as the gore (and the attendant sound design) is among the most sickening in all of cinema. 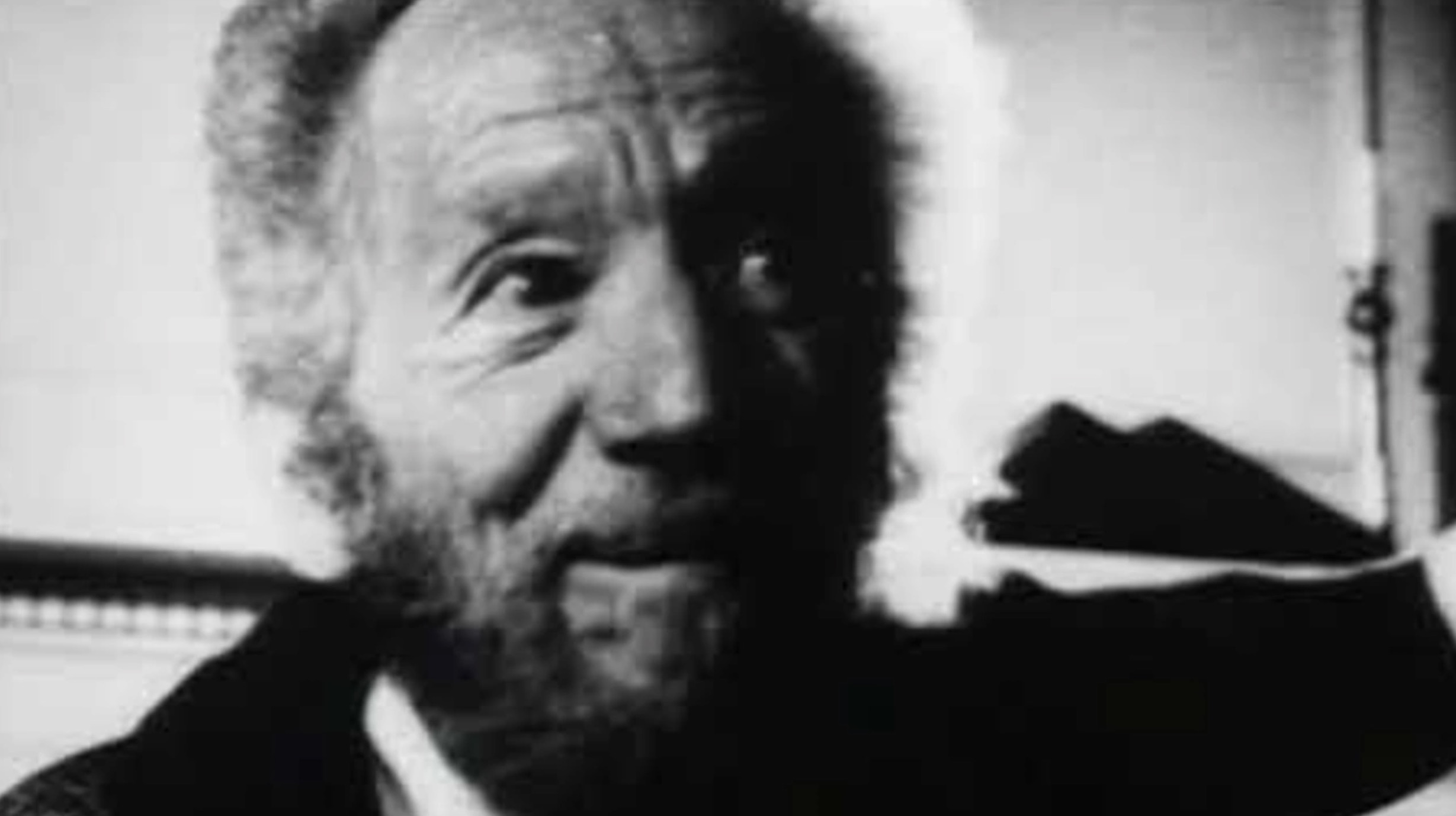 Another highlight was an event presented by the Cinéclub Film Society of Montreal called The Poe Morgue: A Journey Into Fear, which was a celebration of Edgar Allen Poe’s work and cultural influence. The night began with a screening of Fall of the House Usher (1928, James Sibley Watson and Melville Webber), a short silent, avant-garde version of Poe’s tale that is impossible to follow but just as hard to look away from, with live keyboard accompaniment. Then, a man who was said to be the great-great-great-great grandson of Poe’s mortician (or was he an actor?) performed a theatrical reading of The Raven, prop bird and all. He would return later on for another tale. After that, we saw a stylish version of The Tell-Tale Heart (1971), directed by Steve Carver, appropriately spooky and remarkably faithful to the story. Finally, there was Dario Argento’s half of Two Evil Eyes (1990), a (loose) adaptation of “The Black Cat” (George A. Romero directed the other half, an adaptation of “The Facts in the Case of M. Valdemar”). Starring Harvey Keitel as a real asshole, which he plays expertly, it is one of Argento’s most fun outings, following an unhinged photographer who shoots himself killing his wife’s car and puts the photo on the cover of his new book. It gets loonier from there, and moreover it signals Poe’s lasting influence as not only about the actual content of his stories but about the atmospheric terror of death itself. 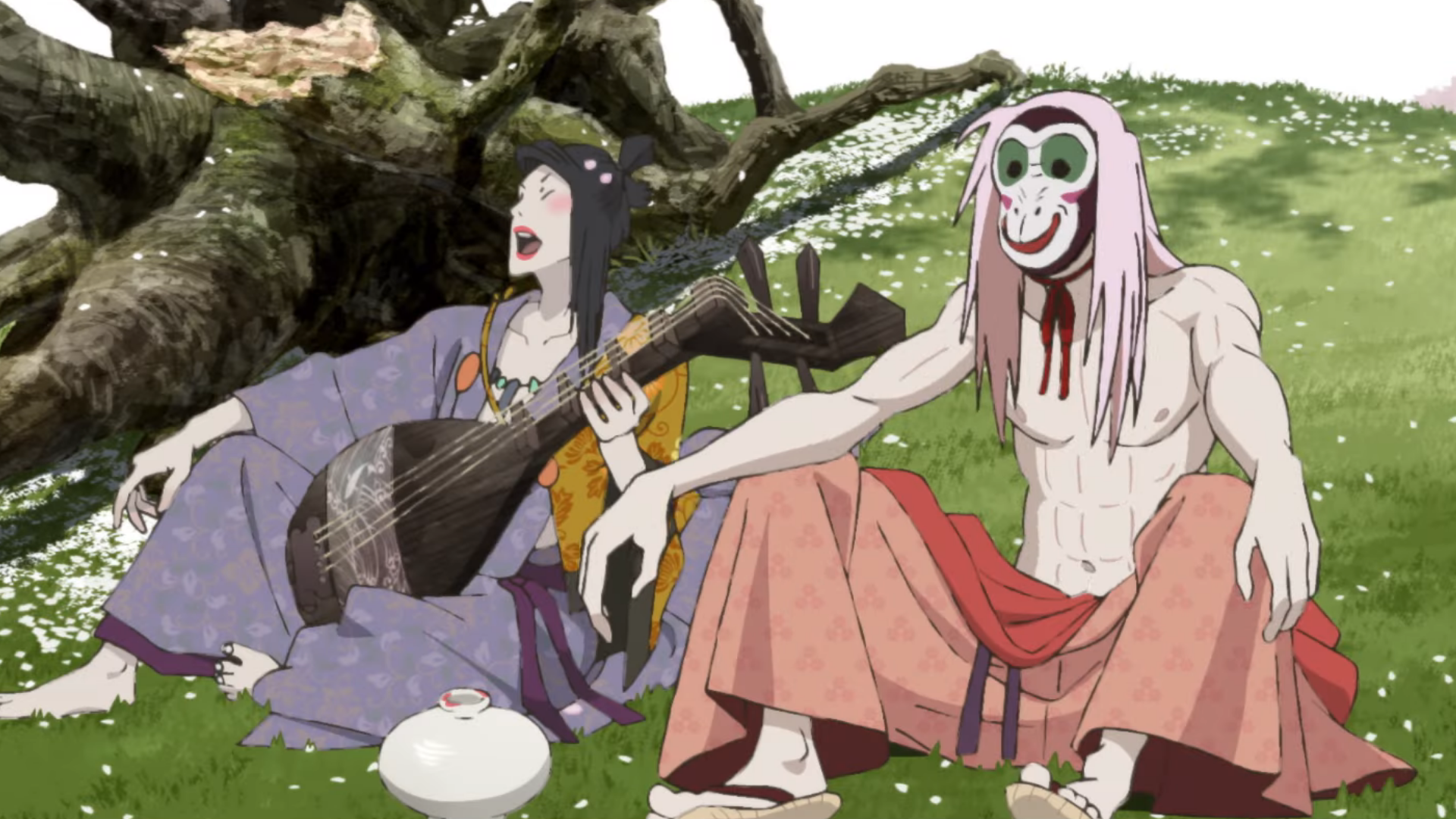 As for the newer films debuting at the festival, results were decidedly more mixed in this reviewer’s experience. An easy standout was Masaaki Yuasa’s latest, Inu-oh, a film unlike any other. Set in medieval times, what begins as a plaintive tale of two misfits transforms into a sublime rock opera about the building of myths and how they can be appropriated by the powerful. What lingers most is the story of Inu-oh, born with a curse that deforms his body and leaves him shunned by his family and community, but who finds new life through his performances alongside the blind musician Tomona. Even if you were unaware, as I originally was, that Inu-oh’s voice actor, Avu-chan, is trans, it is clear that the character’s arc reflects an acute queerness of a changing body, a transcendent identity, and a world-changing performance. The film’s story gets a bit unwieldy, but you feel comfortable in Yuasa’s hands, and it looks incredible to boot.

Less successful, if admirable in its simplicity, is Carter Smith’s Swallowed, a suspenseful tale of a (bizarre) smuggling run gone wrong with a stale flamboyant performance by Mark Patton as the villain. Jena Malone is fun as Patton’s somewhat reluctant partner, but the film reaches for an emotional connection between the two smugglers that never quite lands, and the drama fails to fully maintain our attention as a result. Similarly stupid but certainly a better time is Deadstream, a new entry in the screenlife subgenre (think Unfriended and Searching) directed by the married duo Vanessa and Joseph Winter who, before now, were known for their scary viral shorts. Filmed in apparent real-time by a disgraced livestreamer (played by Joseph) visiting a haunted house to reclaim his former glory, the film makes the most of its formal conceit, eventually even putting a camera on one of the creatures. Luckily, it doesn’t take its meta-commentary of online life too seriously, instead throwing its weight into effective practical effects and genuinely amusing jokes (Joseph is also annoyingly adept at capturing the typical style of address for a dickish Twitch streamer).

Mickey Reece, an up-and-coming low-budget genre filmmaker who clearly has the chops, returned to Fantasia with the somewhat confounding Country Gold, a dark comedy about two country music stars in 1994 who meet and have an intermittently tense and warm time together. Reece’s sensibility is rather unique, but is not unlike Danny McBride’s approach to Americana on his shows Eastbound & Down and The Righteous Gemstones, (barely) heightened satires of the greed, kitsch, anger, and eccentricity of the country itself and especially its version of fame, money, and power. It’s a specific vibe that Reece has, and at times it can seem unclear what the joke really is, but a voice like his is more than welcome in independent cinema. 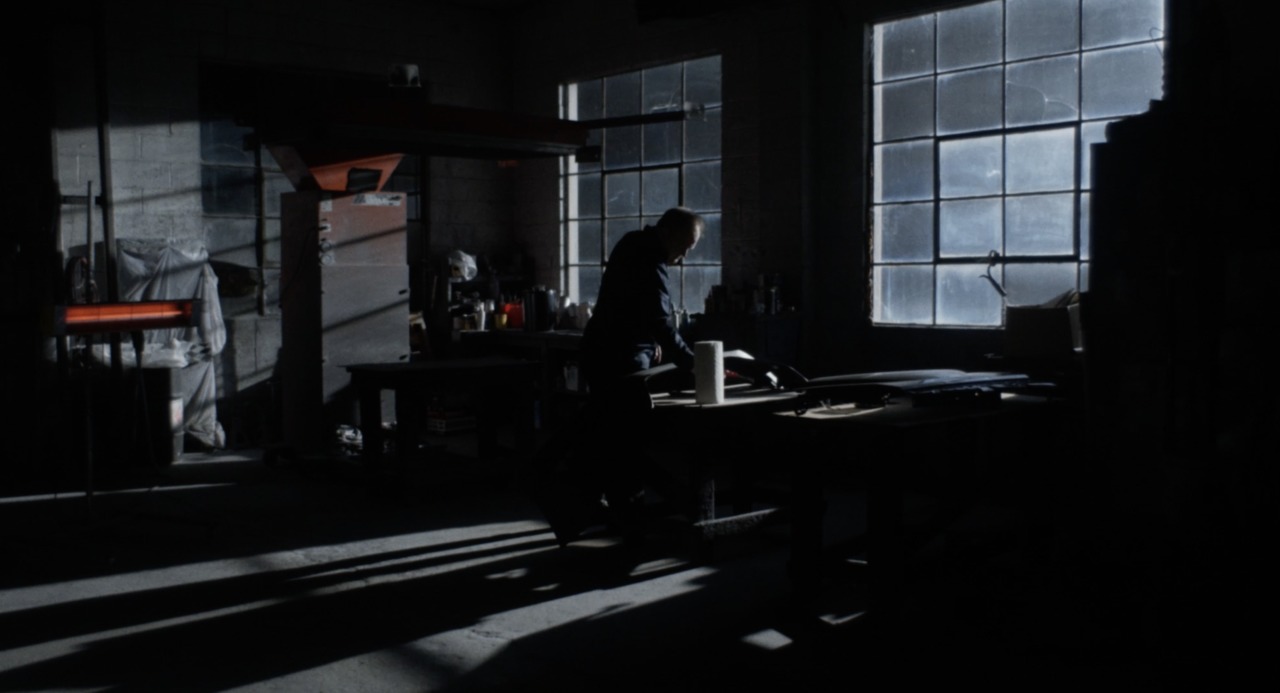 Another rising indie star is Tyler Taormina, known for Ham On Rye (2019), who returns with an hour-long pandemic-era experiment called Happer’s Comet. Starring a series of family, friends, and residents from his hometown on Long Island, where he returned to in the spring of 2020, it’s a largely wordless journey through empty or sparsely populated spaces, lonely streets at night, dark living rooms with a flickering television, eerie parking lots. Capturing a series of suburban spots that feel universally recognisable, it’s not exactly melancholic, not quite serene, not entirely mysterious. Taormina is one to watch, a reminder that one’s circumstances and perceived limitations can always be redirected with thoughtful, electric purpose.

Above all, Fantasia in 2022 strikes confidence in the ongoing power of cinematic culture in a tumultuous age of great uncertainty and anxiety about the medium. Being in a crowd when Sun Chien or Lo Meng move like no human should be able to move in Kid With the Golden Arm (1979), or when one teen girl stabs out the eye of another as recompense in Honeycomb, or even when we see David Lynch’s ice bucket challenge in Lynch/Oz, one can’t help but feel that cinema is alive and well in the dark of the night.