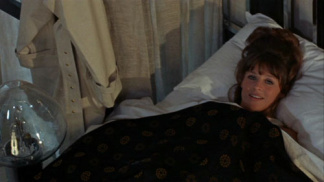 This is a revised version of an article that first appeared in CTEQ: Annotations on Film no. 4, 1996.

Petulia is a perplexing film that is difficult to look back on at a distance of forty years. At one level, it seems like a prime example of the worst excesses of a temporally distressed, spatially convoluted and endlessly fashionable late 60s “counter”-cultural American cinema. On another, it is a soulful meditation upon a society’s loss of core values, purposes and representational systems, as well as a character’s clear sense of being in the world (or even in a film). It takes as its “centre” a relationship between a world-weary surgeon, Archie (a sensitive new-age George C. Scott), and a “kooky” (the film is based on John Haase’s novel, Me and the Arch Kook Petulia), difficult to psychologically pin-down, neo-socialite Petulia (Julie Christie). In essence, this is one of those films where characters wander endlessly across familiar but ill-defined landscapes. In the process, an understanding of lost purpose and emptiness emerges from characters who have seemingly wandered in from a late 30s screwball comedy and are wondering what all the disappointment, disharmony and endlessly redefined sexual parameters are all about.

Petulia is most identifiable and memorable as an attempt to pin-down, representationally, the geography, community and mood of “Summer of Love” San Francisco (and it is beautifully and hauntingly shot by Nicolas Roeg). Throughout the film we get glimpses of what we might expect late 60s San Francisco to look and feel like (a “hippy” car breezes by, Big Brother and the Holding Company play at a party, a trippy Grateful Dead “happening” keeps flashing and strobing into the film). But Lester’s take on late 60s California moves away from the absences, spaces and explicit “time-outs” of Jacques Demy’s The Model Shop (1969) and Michelangelo Antonioni’s Zabriskie Point (1970), films contemporaneous with Petulia that “document” a comparable late 60s West coast malaise. In Petulia, the world is moving too quickly, is too distracted and contents itself too readily with the plastic pleasures of excessive automation, commodification and a gleaming tourist-perfect city. Whereas Antonioni’s and Demy’s outsider views become distracted by the visual field and curious subcultures that Zeitgeist California throws up, we only glimpse these on the periphery of Lester’s film. Perhaps the great achievement of Petulia is its representation of late 60s San Francisco at arm’s length, creeping into the film at the ends of shots, almost stumbled upon by Archie and Petulia as they disorientatingly navigate a series of contradictory (from Nob Hill to Haight-Ashbury) terrains. In the process, San Francisco emerges as something both familiar (all those end-of-the-60s artefacts, the sequoia cut of Alfred Hitchcock’s Vertigo [1958] and Chris Marker’s Sans Soleil [1982]) and curiously, if commercially, surreal. This is best illustrated by the vague sense of temporal disorientation (when and where are we?) and the carnivalesque that stretches across the film.

In general, Lester’s films, particularly those made and mired in the 60s, have a varied, erratic and somewhat hyperactive visual style; though at times in Petulia one wonders whether all this posturing is just a smokescreen for a rather conventional and ill-defined triangular love story (of the decidedly screwball kind). What emerges is a kind of superficially dark Breakfast at Tiffany’s (Blake Edwards, 1961) – with Julie Christie as a cut-rate Holly Golightly/Audrey Hepburn – stuffed to overflowing with all the tics and mannered mannerisms of a neophyte Alain Resnais. Thus, at one level there are few answers here, just anecdotes, a fashionable emptiness and a nice line in late 60s “end of things” modishness. Lester often uses what appears to be several cameras at once (even in the most conventionally dramatic scenes such as the extraordinary exchange between Archie and his ex-wife, Polo [Shirley Knight]) to help facilitate an incredibly and indelibly plastic, virtuosic, fractured and some would say quite pointless representation of a world commodified to the very edge of meaninglessness. Though it is only in Petulia that Lester’s fragmentary, obtuse and temporally convoluted style matches, somehow, the dystopic and subdued content of the film (though at times one does want the film to draw back from this maddening and endless fracturing of time and space). Lester’s other great film, A Hard Day’s Night (1964), gets by or riffs on the extraordinary energy of The Beatles, their individual personalities providing a focal point and framework for its often-digressive narrative and style.

A key to Petulia’s fascination lies in the glimpses we see of an identifiable “counter”-culture. The incessant breaking up of performances by Big Brother and The Grateful Dead reminds one of the somewhat distracted, self-aware and just plain world-weary pop excesses of Help! (Richard Lester, 1965) This is a film which comes to us in parts, with all its rebellion, free-wheeling style and glimpses of Summer of Love optimism bound up in a temporal structure that is almost achingly Proustian; where a gesture, the framing of a body part, or an object, evokes a complex play of memory and premonition. It seems as if this world and the film cannot stare for too long at any one thing, as if to look too hard and long would provoke a crises of existential proportions. The film is held together by Archie’s soulful, world-weary countenance and by the circumstantial detail of San Francisco, 1967. It is almost as if the film tries to establish a flippant anti-Zeitgeist groove but almost accidentally provides a fascinating and curiously vibrant document of the period. This is particularly revealing in relation to the release of the film, which although it documents the “era” of 1967 was actually released into the very different year of 1968. Thus the film also has a sense of almost instant nostalgia, both futuristic and eternally trapped in an impossible, inaccessible and now almost inconceivable moment.

In one scene a patient in Archie’s hospital asks for the TV set in her room to be turned on. It is explained to her that it is merely a facade placed in the room to encourage the patient to want the “real” thing. This is simulation gone wild, inspiring a string of bewildered, distracted and plainly ludicrous exchanges between the patient and staff. Elsewhere, and throughout the film, television provides an incessant backdrop to the rootless and forced whimsy of the characters’ actions (Vietnam War footage seems to be playing almost constantly). The world on display here is defined by the logic of change, exchange and instant dissatisfaction with anything that does not bend to these conditions (so it is a time not so very different from our own). No relationship seems to work in this film because they are all either too static and too plastic, or are defined by an outmoded set of values and emotions. For example, the central relationship between Petulia and Archie almost avoids physicality and moves immediately toward romantic obsession. In an ironic echo of the fragmented sex scenes in Resnais’ La Guerre est finie (1966) the film bypasses the direct representation of sex between Archie and Petulia and moves onto its aftermath. It elides this “revealing” moment of physical expression and instead shows both of them, in turn, sitting contemplatively in an adjacent room distractedly gazing at the other sleeping. And even when the film seems about to be engulfed by Archie’s slowly turning romantic sensibility he loses his conviction, an (in)action which either illustrates his inability to act impulsively (in 30s screwball style) or underlines the out-modedness of such a set of romantic values or even actions. These are the sort of contradictions and crises upon which Petulia thrives.