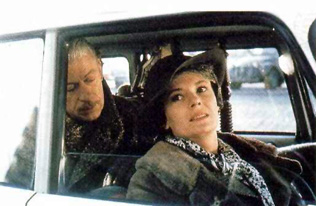 “Au fond c’est une historie banal” our heroine remarks at midpoint. And indeed on the surface that would appear to be the case – or at least the case on part of the surface. For Alain Resnais’ third feature, scripted by Jean Cayrol, deals with a lovely but emotionally scattered widow who (for reasons that seem markedly obscure) summons an old lover from her past in the hope of rekindling a romance that might help her in the present. It’s almost like a storyline from one of Resnais’ favourite America comic strips, The Heart of Juliet Jones. Nowhere to be found are the gut-wrenching memory of a French girl for German soldier during the occupation (Hiroshima mon amour, 1959) or the fanciful recollection of an assignation that may or may not have occurred (Last Year at Marienbad, 1961). But this 1963 release failed to get the warm public embrace or widespread critical regard of its predecessors. Although Muriel deals with the Algerian War (a red-hot issue then, and its recollection no more less so today as shown in Michael Haneke’s Caché), its “difficulty” and level of experimentation is most evident in its style, particularly in its introductory moments – to this day one of the most discombobulating openings in all of cinema.

Following an austere credit sequence (white letters on a black background with Hans Werner Henze’s Berg-like score playing underneath) we see in a rapid succession of close-ups: a gloved hand on a door handle; a tea kettle boiling; a woman’s purse; a hand with a cigarette in it moving from the crook of its owner’s arm to her mouth and back again; another shot of the gloved hand on the door handle; a hand pouring hot water from the tea kettle; a chandelier; a chair; the door handle again; the tea kettle again; and finally a woman’s head topped by a fur hat, that same woman’s coat, and a woman’s foot idly tapping the floor. What we’re looking at is what in another sort of film would be a very simple scene of a saleswoman dealing with a customer. So why are we being shown the scene this way? (It’s almost as “against the grain” as Twice a Man – Gregory Markopoulos’ experimental semi-narrative produced in the same year.)

According to one of Muriel’s greatest champions, Richard Roud, this opening “expresses Hélène’s nervousness and excitement at her impending meeting with an old lover” (1). That would likely be the case if we knew who Hélène (Delphine Seyrig) was – and at this point we don’t. She’s simply part of a series of shots – barely identifiable as an autonomous figure at all.

“When Resnais cuts abruptly, he pulls the viewer away from the story”, claims Susan Sontag (2). “His cutting acts as a brake on the narrative, a kind of aesthetic undertow, a sort of filmic alienation effect.” This is quite true, but rather than laud such an effect, Sontag feels Resnais hasn’t achieved “the reconciliation of formalism and the ethic of engagement” she believes he desires, thus marking Muriel as “a noble failure”. Andrew Sarris did not agree at all writing an enthusiastic two-part review in The Village Voice (November 21 and 28, 1963). However, to Sarris’ dismay, when part two was just about to go to press he learned that “the dastardly distributors” had withdrawn “Muriel from the Plaza in the dead of night with no advance warning” (3).

The film was no better received in France, disdained by audiences and embraced by very few critics. As a result, Resnais’ career was put on hold until 1966 when he made La Guerre est finie, an infinitely more popular (and aesthetically conventional) drama about a dashingly romantic leftist played by Yves Montand in a story by Jorge Semprun that delighted even those with no interest in politics whatsoever. One can hardly blame Resnais for “running for cover”. And yet this most signal “failure” of his career remains to this day a key work – its approach to character and narrative echoing in such otherwise different films as his “behaviourist” jape Mon Oncle d’Amerique (1980) and the Sacha Guitry-styled “filmed theatre” of Melo (1986). But what Muriel emphasises, like no other work of Resnais, is an engagement with 20th century French political history at its most unsettled and raw. This is not surprising as Jean Cayrol’s previous Resnais collaboration was Night and Fog (1955) – a study of the German concentration and extermination camps whose shocking power hasn’t diminished in over half a century.

As indicated in Cayrol’s script – which in published form includes information about the character not offered in the finished film (4) – the setting, the town of Boulogne-sur-mer, is as much a character as any of Muriel’s human ones. Calling it “une ville reconstruite”, thanks to the extensive rebuilding done after World War II (when much of it was bombed beyond recognition), Cayrol notes of his characters, “Il son toujours entre deux souvenirs, entre deux temps, entre deux passions, instable, mal remis, ne connaissant aucune frontier a leur existence”.

This is especially true of Hélène. An antiques dealer whose apartment is also her place of business, she’s a compulsive gambler, deeply in debt to her friend Claudie (Laurence Badie). Though she has a suave and handsome lover, magnificently named Roland de Smoke (Claude Sainval), she shows less affection for him than she does to her stepson Bernard (Jean-Baptiste Thierée), who is just back from the Algerian War and deeply troubled by his experience of it.

Bernard claims to have a fiancé named Muriel – who is in delicate health and thus unable to meet Hélène. But as we soon learn, Muriel is the name of an Algerian girl Bernard and his fellow soldiers tortured and killed. She is never seen in the film, which contrasts with purpose and form of the flashback structure of Hiroshima mon amour. We learn of her only through a scene in which Bernard shows the old man, whose horse he borrows for rides along the seashore, 8mm movies of his time in Algeria. The images (faded and obviously made by a real soldier once stationed there) are completely innocuous. Cutting between these banal shots and his troubling words recalls Night and Fog. But far more heated are Bernard’s encounters with an ex-comrade from the military named Robert (Philippe Laudenbach), suave as de Smoke but decidedly sinister, he hopes to lure Bernard into working with him for the OAS fascists. At the same time he’s a rival in Bernard’s somewhat distant affection for Marie-Do (Martine Vatel), a sweet, completely uncomplicated local girl who in another story would be Bernard’s ticket to happiness.

Such a heart-attack-serious secondary story would appear at odds with the principle one: a seemingly silly woman in pursuit of an old roué she’s better off without. This perhaps true at first, but there’s something almost on the level of national allegory in Hélène’s affection for the bounder Alfonse (Jean-Pierre Kerien). He’s the virtual embodiment of the petite bourgeoisie that embraced both Vichy and colonialism. Arriving with his young mistress Françoise (Nita Klein) in tow (grotesquely trying to pass her off as his “niece”), he’s exposed for one sham after another, long after his brother-in-law Ernest (Jean Champion) arrives demanding he return to the wife he abandoned – and claims is dead. He also never owned a restaurant in Algeria, or was invited to Buckingham Palace, or really loved Hélène. Yet it’s Alfonse who retains her affections – not Ernest who she failed to see was the one who really loved her years ago. What saves her from our complete dismissal is her profound love for Bernard.

Why such maternal affection for the stepchild of a man she didn’t marry for love (and never mentions, save in passing)? Because he represents the hope of breaking free from the pathetic emotional dependency that’s behind her gambling addiction, and every other one of her failures in life. That’s why Resnais declines to afford Hélène the uncomplicated sympathy he extends to the even more complicated heroine in Hiroshima mon amour or even the upper-class fashion plate Seyrig plays in Last Year at Marienbad. And that’s why she ends up a bystander in a grand finale almost as discombobulating as the film’s opening.

Ernest, who has been lurking around the edges of the action, confronting Alfonse in a cafe at one point, shows up at a dinner party where Hélène has assembled most of her friends. After singing a delicately sentimental ballad called “Deja” a cappella, he launches into a diatribe, only snatches of which we see and hear. As Henze’s score becomes increasingly percussive, Resnais cuts between Ernest and shots of apartment buildings in the city (a technique Godard borrows in 2 ou 3 choses que je sais d’elle, 1967, a film he regards as a companion piece to Muriel). Uncharacteristically, Alfonse explodes in fury, physically attacking Ernest. An obviously delighted Bernard grabs his camera to film the action and asks for someone to get his tape recorder for the sound. Françoise, who in the course of the film has become friendly with Bernard almost to the point of romance, inadvertently turns the machine on, playing a recording of soldiers laughing – obviously Bernard’s comrades torturing Muriel. Accelerating the action even more, Bernard flees the scene and goes to see Robert who he shoots dead. (Bernard is a strikingly contemporary figure in 2007 in light of the Bush administration’s abandonment of the Geneva Convention, habeas corpus.) Meanwhile, more distraught than ever, Hélène finds herself visiting a couple of married friends she hasn’t seen in years. As it turns out they live close to Bernard’s studio, from which an explosion is heard. Was there a gas leak, or have Robert’s allies taken revenge? Hélène rushes to find out, fearing the worst, only to discover Bernard alive. But this happy reunion is also a farewell. Now guilty of murder, Bernard knows he must go on the run. Hélène’s other man on the run, Alfonse, meanwhile, escapes from Ernest. And to top it all off his wife arrives at Hélène’s now-empty apartment, calling his name as Henze’s score rises and “Fin”, with seeming suddenness, appears.

So what have we just seen exactly? A bunch of silly people, mooning over a past that never was while making a hash of their present? Or a France forced to face its true self at last? Naturally it’s both. And in that true self-confrontation, Resnais’ art achieves its most indelible effect.