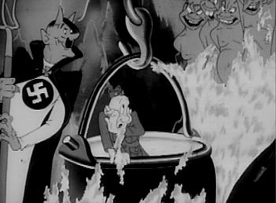 Spies is the third of 26 three to four minute cartoons featuring the character of Private Snafu made by the Warner Brothers animation department for the United States Army Signal Corps between 1943 and 1945. Like many parts of the American film industry, the animation departments of many of the large Hollywood studios were corralled into producing films that focused upon or referred to war-related subjects. Some of these cartoons, such as Frank Tashlin’s brilliant The Swooner Crooner (1944) – featuring Frank Sinatra and Bing Crosby-styled roosters mobilised to help croon the “bobby-soxer” hen population of a munitions factory-like farm into increased egg production – manage to incorporate these themes into frameworks (of character, situation and humour) largely in keeping with the studio’s output before and after the war. Others cartoons, such as the notorious Bugs Bunny Nips the Nips (Friz Freleng, 1944) or Daffy the Commando (Friz Freleng, 1943) are much more purpose-built and propagandistically strident films, constructed mostly around over-determined stereotypes of gesture, accent and physical appearance, aspects which have often faintly embarrassed or troubled the respective studio when re-shown or re-released in the post-war period (many of these films are often excluded from television or video packages and are very hard to see). This war-related “content” is often now most noticeable and viewable in the string of popular catch-phrases and terms which litter the Warners cartoons of this period: “4-F”, “gremlins”, “Is your journey really necessary?” etc. (1)

The rarely seen series of Private Snafu cartoons belong to another tradition altogether, closer in approach and intent to many instructional documentary films produced during World War Two (2). This is not surprising as the films were commissioned as part of the bi-monthly The Army-Navy Screen Magazine, produced by Frank Capra’s film unit, which also created the “Why We Fight” series of inspirational, motivational and cautionary medium-length and feature documentaries. Although, the Snafu films are targeted at young American military recruits, and are predominantly instructional in form, they are, nevertheless, clearly connected to the humour and style being refined by the Warners cartoon unit at the time. In 1943, Chuck Jones was starting to develop into one of the most interesting directors in the unit, gathering around him an increasingly adventurous and sympathetic group of animators, layout artists, background designers and writers. Jones took some time to develop as a consistent director, his intimate skill in the details of character animation initially inhibiting his ability to produce fast-paced and genuinely funny cartoons in the style of Tex Avery, Bob Clampett and Frank Tashlin. In 1941 and 1942 he started to experiment with increasingly stylised and expressive forms of animation – particularly in his use of backgrounds – highlighted by such “graphically designed” films as The Dover Boys and Conrad the Sailor (both 1942), works that experimented with more limited, sketched-in and modern forms of cartoon design (which, while still focusing on character, were more willing and able to capitalise on the generally form-stretching manner of the Warners’ style). Although, all of the key animation directors at Warners during this period made entries in the Snafu series, Jones’ work is undoubtedly the most significant, committed and sustained – he made the first and last entries, and directed 12 of the 26 films overall.

The Private Snafu cartoons were made explicitly (and only) for a military audience. Their reliance upon often rather child-like humour, and for the time, suggestive sexual content, indicates the specificity and peculiarity of the spectator they openly address. Throughout Spies hidden and disguised figures – often stereotypes of nationality or particular demonised figures such as Mussolini and Hitler – directly address the character of Snafu, at other times the presumed audience, in a manner that directly aims the lessons of the cartoon their way (the soldier in the cartoon and the one watching on one of the various American bases positioned throughout the global conflict). These cartoons were not shown to civilian audiences, and have rarely been exhibited since (although they are available on some public domain DVDs and videos). As such, they provide a fascinating insight into the ways in which particular organs of the U.S. government both intended to represent their actions, the philosophy behind them, and acculturate the individual soldier into the discourses of community, mutual awareness and authority deemed essential to the war effort. Each of the films also highlight both the importance of following directions and of the individual soldier seeing their own importance in the greater scheme of military mobilisation. Eric Smoodin, in one of the few sustained attempts to conceptualise and place the Snafu cartoons, suggests that this series was largely made to redress the widespread disenchantment of the largely lower and middle-lower class recruits that were entering the military in large numbers in 1943 (3). Although presenting a critical view of its often neglectful and thoughtless central character, this series attempted to focus attention on the common or “everyman” nature of the average male military recruit. Spies is probably one of the clearest illustrations of this tendency. In a very short time frame the film shows how the various snippets of information let slip by Snafu in a variety of familiar but unguarded moments – talking to a bartender, being overheard on the phone, being seduced by a voluptuous woman with a carrier pigeon for a hat and a recording device for a bra – lead all the way to Hitler and his immediate order to mobilise “all wolf packs”. Ultimately ending with Snafu’s quick descent to hell and a personal encounter with the Fuhrer himself (complete with pitch-fork, red suit and pointy ears).

The Private Snafu series also saw the first collaboration between Chuck Jones and Theodor Geisel, better know as Dr. Seuss. Geisel was at the time enlisted into the Signal Corps, and contributed the often-rhyming dialogue to a number of the cartoons in the series. By 1943, Geisel was already a successful author, having published a number of his illustrated children’s books – such as Horton Hatches the Egg, which had been adapted into a slightly longer than usual short animation by Bob Clampett for Warners just the year before – and worked on the scripts of both animated and live-action documentary films for the United States Army. In many respects, Jones and Geisel can be seen as an almost ideal pairing, the somewhat esoteric and gently playful nature of the writer’s language matching the subtlety of Jones’ gestural animation. Nevertheless, the aim of the Snafu cartoons was not subtle and gentle persuasion, but the cloaking of fairly direct, serious, but light-heartedly presented instructional messages and warnings within the form and sweep of the relatively familiar, all-ages friendly, Hollywood studio cartoon. This familiarisation was of course aided by the mobilisation of key creative figures within these studios, as well as the utilisation of well-worn techniques, styles of animation and character design. For example, Snafu has physical characteristics not unlike Elmer Fudd, and his voice is a combination of various well-established Warners characters: although he sounds most like Porky Pig, the Brooklyn twang of Snafu’s accent also suggests Bugs Bunny. Similarly, the pace of the cartoons is in keeping with the Warners style of the time (particularly the hyper-kinetic qualities of action and dialogue found in Clampett and Tashlin’s films), while certain other elements such as the use of Raymond Scott’s “Powerhouse” on the soundtrack of Spies link these cartoons aurally and visually to others starring massively popular characters such as Daffy Duck and Bugs Bunny.

The Snafu cartoons foreground their address to a specific audience by deploying military slang (as mentioned above) but also by stepping outside of the limits of the Production Code then in place. The very name of the central character points to both of these characteristics. “Snafu” was a military acronym that in itself foregrounded the more risqué content of these cartoons (translating in its more lewd form as “situation normal all fucked-up”). These cartoons were often also more open in their suggestion of sexual activity (a more libidinous approach to sexuality – and its acceptance during this time – seems to have also influenced such contemporaneous works as Tex Avery’s Red Hot Riding Hood, made at MGM in 1943). Even the character of the female spy seems designed as both a figure of caution and explicit desire, implying that the function of these characters was definitely ideological but also to some extent biological (thus they could serve more than one purpose at the same time).

Spies is widely regarded as one of the best examples of the Snafu series. The film is full of verbal and visual imagination, not the least example of which is the many ways in which it manages to work in the shape of the Swastika, and other symbols of Fascism, into its visual design. Like many other war-themed Warners cartoons of this period, Spies provides a litany of caricatures of the Axis powers, crowding many of its frames with figures representing German, Italian and Japanese stereotypes (each of whom is shown to be listening-in constantly, in explicitly conspiratorial fashion). The whole thing has a quality not unlike Ernst Lubitsch’s To Be or not to Be (1942), and operates as both a cautionary tale and a delirious burlesque of stereotype and overly symbolic imagery. Though very connected in style, the film seems light years away from such later Geisel and Jones collaborations as the perennial How the Grinch Stole Christmas (1967). On the whole, the Private Snafu series provides an important, and often neglected, insight into the workings of the Warners’ animation unit during the widespread mobilisation of World War Two.