I had liked the insolence of Virginie Despentes’s first novel, Baise-moi (Paris: Florent Massot, 1993). On the cover, there was the drawing of a little kid with his head surrounded by a blood-red halo. This was an allusion to the most infamous murder committed by the two anti-heroines of the book, Nadine and Manu, as they are on the run through France. In a provincial candy shop, at the slightest pretext, they shoot to death a snotty little boy, his annoying grandmother, and two frightened shop girls. This is the one crime, they comment among themselves, that we will never be forgiven for. With that moment, the book reached an almost surrealist tone – the exquisite corpse of crime, gratuitous murder – as expounded in one of Breton’s manifestoes (the perfect surrealist act would be to come down in the street with a gun and shoot at the crowd) or even in Artaud’s theater of cruelty.

In spite of her sometimes crude, in-your-face neo-feminist stance, Despentes seemed to be articulating genuine ethical concerns throughout her book. Murder is murder is murder. It could be fun, it could be a scream of revolt, it could be the downtrodden’s last resort, it could mirror the way society kills us a little bit everyday – but it’s never justified. There are no good murders and bad murders. There are not people who deserved to die and people who do not. Nobody deserves to die – murder is bad – and the heroines of Despentes’s book knew they were bad, and enjoyed it.

Yet, when I viewed the film, the infamous child murder was nowhere to be seen. It was replaced by a highly problematic scene. Manu (Raffaëla Anderson), the drug-addict beurette (young woman of Arab descent born in France) and Nadine (Karen Bach), the prostitute on the lam, go to a sex club. You’d think they go there to get fucked (baise-moi, after all, means fuck me). Nay! They go there to witness, in disgust, the erotic decadence, the crass stupidity of the middle class who need to go to a specialized club to get off. So when one guy puts his ugly paws on Manu’s frail body, she tells him to fuck off. Offended, the man replies: We’re not in a mosque, here! showing darn well that he is an insensitive, uncouth, Arab-hating asshole. A bloody mayhem ensues, during which the patrons of the sex club are shot to death, some in compromising positions. And the racist punk, of course, gets it as well – after he’s being made to wallow in fear in front of the lady-killers – and he gets it in the ass.

Why did it make me think of the death of Garcia Lorca?

No filmmaker is totally responsible for the stupidities written about his/her work – but when I read a review in the LA press pondering at the difference between justified killings, like the ones occurring in the sex club, and the murder of an innocent woman by an ATM machine, it confirmed the gut feelings that had haunted me since seeing the film in Paris. Shying away from the ethical issues posed by the book, the film, under the pretext of being shocking, takes a timid shelter into middle-brow, right-wing, vengeful, and ultimately anti-sex moralizing concerns.

There is a truism in commercial film production, as Hitchcock himself discovered at the release of Sabotage (1936), that most film patrons will forgive you anything – mass murder, the inside of a gas chamber-as-if-you-were-there, a woman’s body defiled and cut into little pieces, torture with a chainsaw – but not the murder of a child. So deleting that scene that was so central to the book was a cowardly compromise for simple reasons of mass marketing. I am less troubled by its absence, however, than by what replaces it.

There is a dangerous zone – explored in literature by the likes of de Sade, Sacher-Masoch, Lautréamont, Bataille, Oshima, Tanizaki – but in which cinema rarely ventures. It took Pasolini years to dare adapt de Sade – and his 120 Days of Sodom (1975) is an incisive cinematic reflection on the meaning of repetitive murder, on the connection between sex and violence; eroticism and oppression; blood, feces and semen; the desire to own, oppress and destroy the Other and the desire to be fucked by people who are ordered to do so. It organizes its mise en scène to compose a metaphor for this primal space in which sadism and masochism intersect and in which, by virtue of the social order, some private sexual fantasies are turned into a system.

Don’t get me wrong. My intention is not to use de Sade or Pasolini as a gauge to belittle Despentes’s achievements as a writer and a filmmaker – that would be almost as unfair as killing an innocent woman by an ATM machine. But Despentes’s book had given me hope for a new twist in l’écriture féminine that would look, unflinchingly, at our own cruelty. The film she co-directed with Trinh Thi has thwarted such hopes – for the time being. Why do we have to be good (killing the bad swingers) when we try to be bad (killing, stealing, taking drugs, being on the lam, picking up men to have sex and then discard them like useless objects)? There were a lot of potentialities in this baise-moi. It was not about women being in charge by fucking men (second-wave-feminism), but about women taking control by ordering men to fuck them: a thought-provoking exploration of female sexuality.

Yet, at this level, even the book fell short. Rather predictably, à la Thelma and Louise, what triggered the fiction was the horrified, angry reaction to the violent victimization of women (rape and murder) for Manu, and a mounting rage at being exploited in the hands of her customers for Nadine (a splendid performance by Bach that quietly suggests the contradictions of her character’s inner life, and whose presence – almost – redeems the film). The interesting narrative twist was not so much that the women resorted to murder, but that they decided to go to the limits of their objectification/abjectification by men – seeking an excess of mindless sex with men who despised women as much as they despised men. It takes courage to look at your own abjection, and this courage, Despentes-the-writer had fleeting moments of it, while Despentes-the-filmmaker almost totally lost it. She still sees women’s sexuality through the prism of her own ideological prejudices. Another telling point is the (non)representation of female homosexuality, that already piqued the lesbian friends in Paris that recommended the book to me. In spite of their growing intimacy and partnership in sex-and-crime, Nadine and Manu are outwardly heterosexual. This is one boundary they decided not to shatter (1). 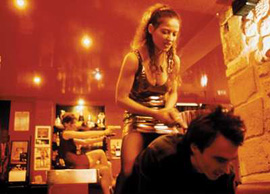 And why do I keep thinking of Lorca’s death (2)? Could it be that shooting the bad pervert in the ass is an act of covert homophobia? This limitation of Despentes’s own view of sexuality, already present, but occulted in the book, comes to hit us in the film. If, to reach a film audience, it is more acceptable to shoot a grown-up male swinger in the ass than a snotty little kid in the head, then something very ugly is going on here. The male swinger becomes a bad object, in whose hatred the fictional characters and the real spectators are united. Like in all the revenge fantasy movies (from Ms. 45 [Abel Ferrara, 1980] to Death Wish [Michael Winner, 1974] and the countless imitations of both genres), the bastard deserved to die. Hence he has to be demonized. He was obviously of questionable moral values. Which bozo would go to a sex club to get laid? Not us, not us, says the collective voice of the (sexy young) writer and co-directors, of the characters who get either paid (Nadine) or chased (Manu) when they get screwed but never never never have to go to a special place to find it, of the (real) porn stars (Bach and Anderson) playing the main roles (who also get paid to do it), and of the cool audience who go and see an erotic art film but would never be caught dead in a sex club. He was also a racist, and a woman-hater. What else? A homosexual, maybe? (3) The line is easily crossed, and Despentes/Trinh Thi might have inadvertently done so.

If you ignore ideology, it will come back knocking at your door. Despentes and Trinh Thi have rushed into a job without being fully prepared for it. Maybe they didn’t care, maybe it was just a question of marketing and money. Good for them. However – and even if a filmmaker of such a caliber as Catherine Breillat supports the film (maybe for the same reasons I did, to counter censorship) – with their sloppy mise en scène and nonchalantly written scenario, they have given feminist filmmaking a bad name. Fortunately for us, there are women who are relentlessly exploring the fine line between good and evil, as seen from the dark corners of female sexuality, such as Peggy Ahwesh, Chantal Akerman, Catherine Breillat or Nina Menkes. Being a revolutionary does not mean choquer le bourgeois – it will always end up being a conservative stance – but having the courage of looking straight at the black sun of our psyches.