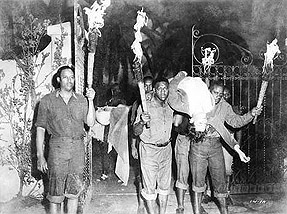 No one who hears the title, I Walked With a Zombie, for the first time, fails to jump to the wrong conclusion. It is not “shock schlock”, though that is certainly what RKO intended when it forced the film’s name on producer Val Lewton, expecting it to guide him toward the creation of a high grossing monster flick. Staking out more interesting territory, however, Lewton made I Walked With a Zombie a part of his campaign to move the focus of the horror genre from supernatural monsters to the dread under the surface of ordinary life. The credit for cutting edge moviemaking usually goes to directors. In this case, however, we are dealing with a highly atypical collaboration between Lewton and director Jacques Tourneur. Recognised now as an auteur producer, perhaps America’s only one, Lewton took an unusually innovative hands-on approach to his films. I Walked With a Zombie is one of several horror films he made in which the real shocker is the human propensity to turn a blind eye to injustice in order to maintain the status quo.

The status quo in I Walked With a Zombie is that of a tropical plantation. Lewton borrowed the story from Charlotte Bronte’s novel, Jane Eyre, but set in it on the island of St. Sebastian. Betsy Connell (Frances Dee), an innocent and pure Canadian nurse, accepts a position on the troubled Holland family plantation. She arrives to find Paul Holland (Tom Conway), her caustic Rochester-like employer; his catatonic wife Jessica (Christine Gordon), her patient; his alcoholic half-brother Wesley Rand (James Ellison), and their worried mother Mrs. Rand (Edith Barrett). Gossip reaches Betsy’s ears that Jessica’s untreatable stupor is somehow a result of an affair she had with Paul’s half brother, and, having fallen in love with Paul, she determines to bring Jessica back to health, as an act of self-sacrificing love. When she is told that standard medicine can’t cure Jessica because she has become a zombie, Betsy lets her black maid, Alma (Teresa Harris), talk her into taking Jessica to the local voodoo priest. The secret visit sets off a chain of events in which voodoo appears to cause the deaths of both Jessica and Wesley, conveniently leaving Betsy and Paul free to build a future together. Surprisingly, the film rises above its creaky plot through its innovative cinematography and its refusal to buy into Hollywood’s practice of reducing white plantation culture to an ahistorical setting for romance.

The genius of the film’s cinematography is immediately evident in its opening credits, a majestic long shot of two shadowy people sauntering amiably on a windy beach, two tiny figures against a large vista of ocean and sky. This beautiful first image is also an in-joke. The two strollers are Frances Dee, the actress who plays Betsy, and Darby Jones, the actor who plays Carrefour, the zombie messenger of the voodoo priest – a complete deflation of the fear frenzy suggested by the manipulative title. Moreover, the tone of these shots further subverts genre expectations. Horror films trade on darkness and claustrophobia, and these initial frames project a limitless, light “big sky” quality. The flow of the ocean near which the characters walk and the oblique lines of clouds in the sky above them both emanate from a vanishing point located off-screen left where sky and sea meet just beyond the limits of our vision – a breathtaking evocation of a very different kind of imaginative horror experience. Highlights of the moody visuals that follow include filtered light that creates the effect of prison bars on the Holland plantation, and an excitingly shot voodoo ceremony.

I Walked With a Zombie then goes on to view plantation racism through the prism of Lewton’s philosophy that horror is a staple of plain old everyday life. After all, what is more ordinary on an old style plantation than racism? Betsy, an unreliable protagonist, is the audience’s ironic guide to how blind people can be to its abuses, her obtuseness prodding the audience to look closer. For example, when Betsy first arrives, the black servant who drives her from the boat to the plantation, tells her of the suffering of the slaves who were transported to the island. Mesmerised by the swaying palm trees, she responds, “Well they certainly brought you to a pretty place”. We connect the dots, but sweet Betsy never does. Instead, she is quick to fall in line with the improbable “zombie explanation” accepted by all the Caucasian masters in the film, most of whom conclude that Jessica’s condition is the result of a voodoo curse that is an apt punishment for her infidelity. But is it? Stories told to Betsy by Alma allow us to glean that “Miss Jessica” was a product of a patriarchal milieu which brutalises black people and causes white women to internalise their roles as passive objects that men compete for. The convoluted official story sees evil in female sexuality and voodoo; the simple truth that none of the characters will directly confront is that women are victimised by racist society and then blamed for it. This is why the final scenes in which Wesley and Jessica die are ambiguous. Lewton staved off censorship by the RKO brass by leaving indeterminate whether the transgressive pair are victims of a voodoo curse or of Wesley’s blind projections of his own guilt onto the voodoo scene.

The film’s credits fail to mention Jane Eyre, but instead cite Inez Wallace as the author of the “original story” on which I Walked With a Zombie was based. Clearly Lewton was hiding his sources by omitting Bronte’s name and, more importantly, by failing to identify Wallace as the author of an ethnographic study of voodoo that presents it as a legitimate communal ritual, not a story. Were the sources too literary? Too sociological? Did he fear the displeasure of the executives at RKO at the prospect of a “message”? In any case, he did not lose his sense of humour. The disclaimer in the opening credits about the characters and events presented in the film denies any similarity to “actual persons, living, dead or possessed”.