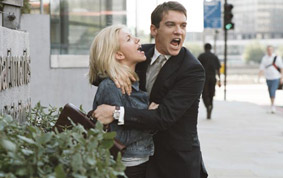 From the extradiegetically quasi-silent Annie Hall (1977) to the mutant meta-musical Everyone Says I Love You (1996), and through works as musically offbeat and eclectic as Love and death (1975) or Shadows and Fog (1992), Woody Allen’s body of work has demonstrated a keen understanding of the possibilities and impossibilities of musical accompaniment in the cinema, an understanding all the more laudable considering the sadly heavy-handed use of music exemplified by a large percentage of the cinematic production, past and present. (1) Indeed, apart from being a seasoned music enthusiast, with, as reported, a serious knowledge of jazz and classical music, Allen is, as is well known, something of a musician himself: an experienced clarinet player. (2) Despite, however, the bewildering range of musical styles put to advantage in Allen’s films over the years, the systematic use of opera as musical accompaniment found in his latest film, Match Point (2005), constitutes a first.

Let us immediately establish a point that is often misunderstood: despite appearances and a rather widespread opinion testifying to this (as illustrated by the lamentable term “opera music”), opera is not a musical style; it is, on the contrary, a dramatic form, distinguished by its use of music as an articulating device, in much the same way as narrative cinema uses means such as mise en scène, camera placement or editing as articulating devices. Despite successful examples – Ingmar Bergman’s Trollflöjten (The Magic Flute, 1975) – the inbuilt “metaphysical”, larger-than-life dimension of opera (largely attributable to its particular methods of vocal production) has always had a hard time interacting with the photographic immediacy of motion pictures. (3) I am indeed tempted to say that the most successful use of opera in cinema can be found in films which do not foreground that art form at all, but use it instead as a stylistic template in order to achieve other, purely cinematic effects (as is the case, for example, in some of Luchino Visconti’s work).

There have been previous (both narrative and musical) uses of opera in Allen’s films – for instance, in Husbands and Wives (1992) – but they have mostly served the canonical (especially in American films) purpose of sketching, or merely designating, a certain upper-class social milieu. Despite the normative presence, in the London-set Match Point, of an upper-class opera-loving family, the fact that the main character, Chris (Jonathan Rhys-Meyers), a lower-class Irish upstart, is, right from the start, emphatically characterized as an opera lover signals the fact that, in this film, we have to deal with something different to the usual use of “high art” as social attribute. And, despite the undeniable signs (the instance of a character describing Enrico Caruso’s voice as “expressing all the tragedy of life”, or the early identification of Chris with Raskolnikov through his being shown reading Crime and Punishment) that Allen is here attempting to inscribe his character in the facile binary ideology of life as a struggle between “tragedy” and “comedy” that hampers much of his recent work, being best exemplified by Melinda and Melinda (2004), it is my opinion that, through his artistic intuition if not necessarily through conscious intention, Allen is out for bigger fish in this case, and indeed achieves something rarely rendered in the cinema with comparable force: namely, the experience of living life as an opera lover. 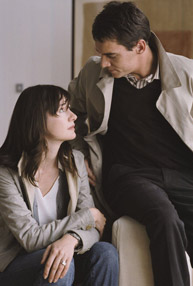 Match Point begins with an interior monologue of the hero, on the all-important (to his opinion) theme of luck. This monologue, prim and disingenuous as it is (and Allen makes it sure that we should not expect more sophistication from his protagonist when, in an early scene, he shows him abandon Crime and Punishment in order to take up The Cambridge Companion to Dostoyevsky!), still has the all-important effect of designating the hero as an introvert (4), a man whose perception of the world is not direct but mediated, filtered through inner experience and deliberation. It also has the side effect of qualifying the narrative tone of the film as subjective, filtered through the eyes of the main character. This would account for the set-piece quality of several crucial scenes (the perfunctory “visitation” of the ghosts towards the end, qualified as it is, through editing, as a possible dream sequence), as well as for the very broadly drawn (to put it mildly) secondary characters: the self-destructive femme fatale (Scarlett Johansson), the doe-eyed innocent “marrying girl” (Emily Mortimer), the high-strung alcoholic matriarch (Penelope Wilton), the quasi-caricatured police officers (James Nesbitt and Ewen Bremner). (5) Indeed, in its set-pieces, sensationalistic “amoral” ending and “block” characterization, Match Point treads a path not too far away from traditional Romantic (6) operatic models.

I maintain the – unfashionably tenuous – opinion that there exists a series of interesting parallels relating the figure of the opera lover (as distinct from the opera singer) to that of the introvert. These are: a sense of distance towards the “outer world”, usually accompanied by the clandestine belief that the ramifications of the latter pale next to the directness and purity of inner experience, or, in the case of the opera lover, operatic blood and thunder; a tendency to classify information in categories, to see the “type” rather than the individual specimen (the attribution of “vocal types” to singers in opera bears witness to that); and, last but not least, a compulsion to use inner experience or, respectively, opera as a defence mechanism against the outer world, a world potentially, and inherently, traumatic. Furthermore, it is notable that opera, as a functioning agency in the consciousness of the introvert opera lover, has a well-documented tendency to attain a quasi-independent working status of filtering reality, of tempting, even, many of us with a fanciful reduction of the outer world to the stock collection of arrogant tenors, jilted baritones, trite plots and haughty prime donne (7).

It is this, the defensive function of operatic mediation with regard to “raw life”, that is rendered with remarkable force in the film’s most memorable sequence: the double murder of the old housekeeper and Nola (the character played by Scarlett Johansson), a ten-minute scene scored with practically the whole (8) of the Act II duet between Othello and Iago from Giuseppe Verdi’s Otello. The important thing to keep in mind here is that, in this case, we are not dealing with typical musical accompaniment. In fact, we are almost not dealing with music, in the ordinary sense: this is not a song, an aria, as is, for example, the piece by Gaetano Donizetti which underscores the opening and closing titles, as well as Chris’s frantic chasing of Nola through the Tate Gallery; Verdi’s duet is a dramatic dialogue, in which the words are as important as the music, and where the musical form is primarily determined by the course of the drama. Indeed, the opera lover – or, of course, the Italian speaker (9)– is presented in this sequence with a most unusual situation: he is, effectively, asked to keep track of the (real-time) evolution of two dramatic situations at the same time. (10) In this, Allen’s method, though subtler, is not very dissimilar to that used in Mike Figgis’ Timecode (2000), which presents the viewer with the simultaneous unfolding of several, interlocking, stories on the four quadrants of the screen; and the fact that, in Match Point, the dramatic situation presented by the opera (briefly, Iago’s successful attempts to convince Othello that Desdemona is guilty of adultery) does not have any real, direct or specular (through plot or other analogy, like, for example, the Dostoyevsky allusion) connection with the situation presented in the film makes Allen’s use of the device even more challenging, in its way, than Figgis’. Finally, Allen’s masterstroke here is his choice to let the extract from the opera continue uninterrupted through the scene, even when the music, in blatant disregard of the conventional laws of film scoring, does not even match the events shown onscreen in terms of mood, and this during large chunks of the narrative.

This method (which one would be tempted to call dramatic polyphony), of letting simultaneous dramatic strands, each with its own dramatic texture and rhythm, coexist on the screen, allowing for their points of convergence (for example, when a loud noise that startles Chris occurs simultaneously with a loud chord in the music) and spaces of divergence, is not notable or important per se, as an aesthetic device; it is, however, as an expressive one. It has, in this particular case, the effect of rendering the carrying out of the traumatic murders both from an objective and a subjective (Chris’) point of view. More particularly, the method has the effect of objectifying, through the convergences and divergences of musical score and photographed action, both the chunks of Chris’ defensively dreamy, semiconscious acts and his sharp points of piercingly acute consciousness. In this way, the scene gives an enormously perceptive account of the state of consciousness under which a traumatic act is carried out: it designates, effectively, such consciousness as discontinuous. 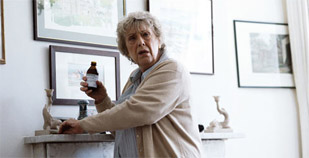 What is more, the method has the effect of derealising Chris’ murders, inscribing as it does on the same filmic space both the unbearable reality and a subjective fantasmatic surrogate for it (11), in this case Verdi’s opera. What I mean by “subjective fantasmatic surrogate” is not, of course, that Chris might here “imagine” himself as Othello in conversation with Iago while killing the old lady and Nola – the substitution to which I’m referring here might more properly be called formal. What I mean is, rather, that Chris’ consciousness during the murder (as rendered in the film) does not, mentally or emotionally, “trace the contour” of his act at the time of committing it (as in this case the act would have been too traumatic to complete), choosing to “caress” the familiar, comfortable scenario of the operatic duet instead. Thus, in its way, the scene – and in this it resembles the famous ear-cutting scene of Quentin Tarantino’s Reservoir Dogs (1992) – effectuates an unmasking of the usual procedure according to which dramatic (that is, traumatic) scenes in films are accompanied by appropriate extradiegetic music in order to be made more palatable; it renders palpable the fact that the function of the familiar (to the protagonist, presumably) contours of the music serve as a formal (if not necessarily moral) justification of his actions in his own mind. (12) Again, the case here is that of opera functioning as a quasi-independent complement of the mind, as a piece of monstrous, omnivorous machinery feeding on the contingent, traumatic materials of “raw life” and transmuting them, for the sake of the opera lover, into meaningful experience and æsthetic form.

It is in this way that the scene can be read as unmasking the incestuous potential of operatic living. Far from describing it as a positive, civilizing agent, a class attribute or a neutral æsthetic construct, the film puts its finger on the more sinister side of opera as a womb substitute, an object to which one clings in order to derealise reality and dissolve it into culture, its sublimatory surrogate, thus, by the same token, confirming it as one of this very culture’s most sublime products. In this, Match Point is the work of a true opera lover.