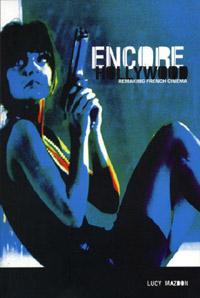 The new BFI series has quickly established itself as one of the more sensible ways into Screen Studies after the florid excesses of post-structuralism and its fallout in unreadable doctoral dissertations.

Back in the ’60s, the little BFI books were the ones to have hanging around (as, come to think of it, were so many of their authors) in those dear, dead heavy-drinking days. In addition, the BFI occasionally broke new territory that was obvious once it appeared: the wonderfully sane Hazell: the Making of a TV Series (Manuel Alvarado and Edward Buscombe, London, BFI, 1978), for example, was a marvel of pragmatism, combining close analysis with the now expected background and industrial processes that inform (or should) contemporary criticism at its best.

Yes, thirty years ago the original BFI series were the ones to have on your shelf, hiding, perhaps, that ’70s stash. In the days before VHS or BETA, the BFI monographs were the little short cuts any cineaste needed, and very useful and impressive they were too.

The latest, perhaps more elegant, publications of which Encore Hollywood – Remaking French Cinema is a fair example, carry a greater gravitas – footnotes, proper references, even a certain flashy scholarship beyond the pragmatics of the past. They can also seem just as indulgent as the earlier models, but on the whole are still refreshed with the tonic of commonsense – marked by a certain determination to leave the heady days of Screen magazine behind in the archives.

The subject of Lucy Mazdon’s book is one that has exercised film buffs and High Culture critics from the first days of the High/Low debate. Simply put: if French cinema is the high point of Cinema, then the lowest must be American remakes of the inevitably finer French originals. The list is awesome: from Raymond Bernard’s Les Croix des Bois (Pathe-Natan, 1931) remade by (auteur) Howard Hawks as The Road to Glory (20th Century Fox, 1936) right through to Claude Zizi’s La Totale (Films/TFI, 1991) remade by (another ‘auteur’?) James Cameron, as True Lies (Lightstorm, 1994). Accusations of appropriation by the evil empire seem endless and have certainly not yet run their course.

Of course, on one level this may seem mere industrial utilitarianism: what worked with a lower budget in the discerning Gallic market can be picked up and ‘resized’ much less expensively and with a higher hit rate than yet another multi-authored developmental deal through the American studio hell, whose processes Robert Altman’s The Player (Spelling International, 1992) so usefully dramatises.

Lucy Mazdon pitches her tent well within the boundaries of umbrage. From the outset she makes it clear that she doesn’t necessarily buy the High/Low guillotine that the Movie Show (SBS, 2001 and forever, no doubt) view of the cinematic universe hinges upon.

Commenting on a splendidly confused Barry Norman (Radio Times, September 1996, details not cited by the author) review of John Badham’s 1993 Warner Bros remake of Luc Besson’s Nikita (Gaumont, 1993), she notes a “much wider body of (particularly French) criticism which condemns remakes, dismissing them as ‘pap’ purely because they are remakes and by extension, ignoring the ‘vacuity’ of the French films upon which they are based” (Mazdon, p.1). Later she lays her cards out more emphatically: “…what critics of the remake process tend to ignore are the advantages of these process for the French film industry” (Mazdon, p.25).

This is bracing heresy and is typical of the spirit that informs this refreshing take on the truism that Hollywood defiles all that it reshapes.

Later, setting up direct one-to-one comparisons between French original and Hollywood imitation, Mazdon observes that “the negative discourses which surrounded the remake process establish a one-way trajectory from the ‘art’ of the French film to the debased commercialism of the ‘American’ remake.” (Mazdon, p.67).

Her central proposition is clearly that the assumption of the necessary superiority of the original films is at least contestable and at worse utterly fails to take into account the complex and intertextual nature of transnational cinema product. She is also clear in pointing out that classics like, say, Jean-Luc Godard’s À Bout de Souffle (de Beauregard/SNC 1959) themselves feed on and rework themes and motifs from American noir and hard boiled fiction as well as the movies. This is hardly a novel insight but it is an essential prerequisite to any discourse of the necessary superiority of ‘the original’ – a line that valorises the sacred romantic principle of the Auteur just when we need it least. The best work in this book therefore lies in the sensible framing of originals and remakes in the context of their times as well as that of national cinemas.

The chapter comparing Daniel Vigne’s Le Retour de Martin Guerre (SFC/FR3, 1982) with Jon Amiel’s Sommersby (Regency/Canal Plus, 1993) thus sets out from the beginning the palpable but ignored script motor that places Vigne’s film in a troubled medieval period but relativises this period in a manner familiar to scholars of recent French cinema and hovers around notions of displacement and identity that can be seen as having clear reflections on (say) French attitudes to the Vichy Collaboration.

Amiel’s film is set in a no less troubling period in terms of America’s national identity. Vigne’s film, for example, underscores the historicity of the narrative by an almost obsessive attention to historical detail and the film’s credits list a number of historical consultants. By moving the film Sommersby to post-bellum America, Amiel (an English director), disconnects the remake from the historical associations of the original. But of course this enables quite different matters to be brought out in the screenplay, though Mazdon argues that the period details of the US version are more cinematic, that is to say, closer to other Hollywood representations of the Civil War period (as for example Gone with the Wind) than to verifiable historic sources or more ‘accurate’ texts such as Ken Burns’ documentary series, “The Civil War” (PBS, 1990). Both films deal in different ways with the construction of the concept of ‘nation’ and both films use their stars (Gerard Depardieu in the original and Richard Gere in Sommersby) in not dissimilar ways, replete with powerful close-ups and lots of onscreen time.

Both films finally deal with acknowledged key moments in the construction of respective national identities and on this matter Mazdon has some useful and provocative things to say: “…not only have France and the United States constructed their respective national identities via these founding events but…their differing concepts of democracy and revolution have also long formed the corner-stone of Franco-American relations.”(p.77). Though such conflation of two different filmic texts is drawing a longish bow, the argument is a useful one and goes to the heart of the perhaps reductionist view of a ‘cinema universe’ that transcends High Culture/Low Culture idées fixes, or even more crude notions of cultural superiority.

Mazdon’s ability and willingness to broaden the frames of reference is one of the strong suits of this book and one that pays off in her analysis of the perhaps most notorious remake (certainly the one most seized upon by purists), the reworking by Jim McBride of À Bout de Souffle as Breathless with (shudder) Richard Gere again! This transgressive act of piracy by Hollywood so loudly detested by more traditional teachers of courses in French Cinema (especially of the New Wave) is generally regarded as the absolute nadir of Franco-American cinematic diplomacy. How could Jim McBride even think he could get away with it? Add to this a general agreement over the last forty years that À Bout de Souffle is the iconic and exemplary work of French Art cinema, the most groundbreaking (and so on and so forth) and Jim McBride’s work seems no more than lese majeste. Mazdon again goes for a wider angle. She carefully picks her way through the location of the Godard movie as a cultural artefact within any overview of the French nouvelle vague – indeed she’s not so sure that it was that big a wave anyway. She also examines the manner in which Godard’s film, in spite of its plot sources and an iconography imported straight from American popular culture, has been accorded, both cinematically and historically, an absolutely central role in post-war French cultural production.

This analysis need not be rehearsed here but it is both useful and well argued. It’s good to see, though, that Jim McBride’s rather neat little meditation on the construction of a character from cultural tics and mannerisms is recuperated, as it should be. And though Mazdon misses the significance of the graphic novel hero The Silver Surfer, to Gere’s character’s understanding of himself in the world, she manages to pick up most of the other key cultural markers along the way. As she notes: “…it’s significant that McBride’s career as a director began during the 1960s, the time of the nouvelle vague…the techniques of the New Wave influenced many of those working at the time and helped create the aesthetic developments subsequently dubbed the ‘New Hollywood’.” (p.85)

And, yes, Mazdon does pick up on the great admiration for and not invisible influences on Quentin Tarantino’s own work a few years later.

One of the better things about this new BFI series is the proper use of references, footnotes and an index. In that Encore Hollywood is such a valuable trawl through the murky waters of cultural nationalism and older debates about the primacy of, well, any other cinema over Hollywood, Lucy Mazdon’s book is both a model of elegant argument and a very useful reference tool. Why, you could even build two courses around it – one on Recent French Cinema and one on Hollywood tendencies – or whatever. But no longer could such courses stand necessarily alone – they would have to inform each other. And wouldn’t that be yet another small step forward for Screen Studies?