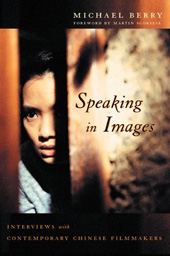 Published in late 2005, Michael Berry’s Speaking in Images: Interviews with Contemporary Chinese Filmmakers is a groundbreaking English-language volume containing in-depth personal interviews with 20 most significant, contemporary ethnic Chinese filmmakers. The interviews were conducted by the author between April 2001 and January 2005 and took place across half the globe. The book’s distinction lies in its “regional focus on the cinemas of China, Taiwan, and Hong Kong” (p. 1). The main part of the book consists of the transcription of these interviews in Q&A format, giving readers access to the filmmakers’ thoughts in their own words.

Endorsed by Martin Scorsese’s foreword, Berry contextualises the interviews by giving an overview of the latest developments within and between these Chinese cinemas. He then structures the interview transcriptions into sections of three Chinese societies – China, Taiwan and Hong Kong. The 20 filmmakers whom Berry has interviewed for this volume include, in order of their appearance in the book, Xie Jin, Tian Zhuangzhuang, Chen Kaige, Zhang Yimou, Zhang Yuan, Wang Xiaoshuai, Jia Zhangke, and Li Yang in the China section; Hou Hsiao-hsien with Chu T’ien-wen, Edward Yang, Wu Nien-jen, Ang Lee, Tsai Ming-liang, and Chang Tso-chi in the Taiwan section; Ann Hui, Stanley Kwan, Fruit Chan, Peter Ho-sun Chan, and Evans Chan in the Hong Kong section. Their profiles differ vastly, ranging from state-sanctioned filmmakers to commercial directors to independents, while they are all highly respected among their contemporaries.

Berry’s intention is that this volume becomes an oral history registering the lives and careers of the most eminent, contemporary Chinese filmmakers. This 568-page book is thus far one of the most revealing interview collections on these filmmakers. The author’s painstaking pre-interview research and immense knowledge of Chinese culture have placed him at an advantageous position to probe the thoughts of these filmmakers. Reader-friendly yet assiduously researched background information is given as introductory remarks for each interview. It helps those readers and researchers who are less familiar with individual filmmakers to follow the conversations easily.

Moreover, these personal interviews are meant to be extensive. The conversations span a wide array of subjects, from the filmmakers’ biographical background, early career, aesthetic inspiration, filmmaking intention, styles and techniques, production experience of individual films, to their vision of the future of Chinese cinema.

Yet Berry does not confine the discussions to just pre-set topics, but lets the auteurs speak their mind and tell their anecdotal stories as freely as possible. Berry skilfully captures responses from these filmmakers in a lively Q&A pattern so that much of what they talk about paints vivid images of their own personalities. We are thus able to hear how Xie Jin has struggled through different political torments and yet can still establish himself as a living filmmaking legend in China. Fifth Generation directors Tian Zhuangzhuang, Chen Kaige and Zhang Yimou tell us how their early lives and vision in film have been deeply influenced by the infamous Cultural Revolution. Sixth Generation members Zhang Yuan, Wang Xiaoshuai, Jia Zhangke and Li Yang expand on their courageous act of leaving the old filmmaking conventions completely behind to explore controversial subject matters likely to displease China’s censorship system.

On the other side of the Taiwan Strait, established Taiwanese directors Hou Hsiao-hsien and Edward Yang mention the Hong Kong New Wave as their inspiration. Collectively, they exhibit their Taiwan experience through New Taiwan Cinema. Hou’s long-time collaborator/screenwriter Chu T’ien-wen and screenwriter/director/actor/producer Wu Nien-jen give us delightful rides in their cinematic world, which reflects their achievement in contemporary Taiwan literature. Ang Lee shares his filmmaking experience of moving perfectly well between Taiwan and Hollywood. Malaysian-born Tsai Ming-liang does not have the experience of those New Taiwan Cinema mainstays and has never worked with any of them. His gratitude to his teacher Wang Shaudi (a prominent Taiwanese director) and his interrelationship with actor Lee Kang-sheng, however, offer us a lot of useful background information to understand the heavy dose of symbolism that saturates his films. Taiwanese independent director Chang Tso-chi suffers much from the restrictions of the Taiwan film industry. We can still hear him airing his grievances about his collaboration with the Hong Kong-based producers for his 1994 debut Shooting in the Dark.

Owing to the operational environment in the Hong Kong film industry, Hong Kong filmmakers Ann Hui, Stanley Kwan and Peter Ho-sun Chan are more concerned about their funding sources and box office performance than the prevailing political atmosphere, though the latter is often unconsciously present in many of their works. Fruit Chan tells us of his successful career shift from a veteran mainstream assistant director to become the most prominent Hong Kong independent director in recent years. As a transnational film critic-turned-filmmaker, Evans Chan also engages us in his fascinating film world, which is not as widely written about as the works of his Hong Kong contemporaries.

Berry presents the material in a way that gives us enjoyable reading throughout. There are, nonetheless, some ambiguities that may puzzle readers of his book. The first one concerns the categorising of these filmmakers’ films. Berry appears to be oscillating between classifying their films as art cinema and his awareness that the art/commercial cinema binarism cannot reflect the real situation of these films. This is because several of these filmmakers are actually making films to appeal to mass audiences. Berry mentions this dilemma early on but does not explore this topic profoundly during the interviews. He concludes hastily that the links in this group of filmmakers are “their common interest in art cinema and their status as auteurs” (p. 17). Such a conclusion suggests the limit of the art/commercial cinema binarism on the one hand, while rendering Berry’s stance liable to challenge on the other.

Berry admits in his introduction to the book that the selection of these filmmakers as his interviewees was subject to his personal taste and their availability. His choice of these most famous Chinese filmmakers does not come as a surprise. The fact that he interviews only two female filmmakers can be justified as reflecting the gender imbalance in Chinese as well as in other international film industries. Nevertheless, as an innovative volume for studying contemporary Chinese filmmakers and cinemas, the book would have benefited from the inclusion of more female Chinese filmmakers who are influential but lesser-written about in English. These filmmakers include, for instance, Sylvia Chang who is a producer/actress/director active in both Hong Kong and Taiwan, well-known Taiwanese female director Wang Shaudi, or Peng Xiaolian who is one of the very few Fifth Generation female directors in China. They are only mentioned by name in Berry’s volume.

The alignment of the geopolitical sections and the filmmakers’ order of appearance in the book may also give rise to questions. Berry is not explicit about why the section on China goes first, followed by Taiwan and then Hong Kong. The author does not explain the criteria used to determine the order of filmmakers in individual sections. It is also not clear why the author has dedicated much more space to some interviews than others. These are sensitive issues that can leave researchers and readers questioning the author/interviewer’s own supposedly unbiased stance.

These drawbacks are, however, minor issues as compared to what Berry has brought to us through his stimulating conversations with these 20 filmmakers. By recording vigorously these Chinese filmmakers’ lives and careers in a single volume, Speaking in Images is a must-read reference for film researchers and admirers of Chinese cinemas alike.