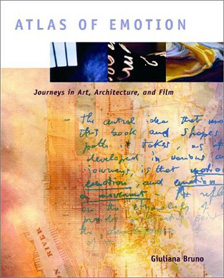 In Atlas of Emotion: Journeys in Art, Architecture, and Film, Giuliana Bruno wanders through the “field screens” of cinematic culture. She travels from the pre-cinematic montage of views of the picturesque in 18th century landscape design to the post-cinematic assemblage of images in artist Gerhard Richter’s Atlas (an ongoing installation work consisting of photographs, collages, and sketches). Bruno’s meandering narrative trajectory also takes in the cinematic city and its movie-houses; technologies of the visible such as the camera obscura, the panorama, and the curiosity cabinets of the 18th century; and an excursion through the work of Peter Greenaway.

Unlike conventional atlases where one easily finds the map of the country one wishes to explore, Bruno’s map is circuitous, multi-layered, and, at times, difficult to navigate with. Ostensibly divided into six sections (Architecture, Travel, Geography, Art of Mapping, Design, and House) which Bruno claims to be an architectural ensemble, the book has more in common with the messy terrain of the emotions than with a three-dimensional structure capable of being inhabited by bodies.

While “pre-cinema” has become well-trodden theoretical ground in recent decades (e.g. in Jonathan Crary’s work), Bruno’s interdisciplinary method, and novel theme of a haptic form of mapping, bring this area of film studies into a new constellation that illuminates the contemporary phenomenon of film in art galleries. Her theorisation of our experience of cinema as a travelling through space – a montage of views co-constructed by the spectator (or, in her terms, voyager) – suggests modes of reception shared between film in the gallery and in the cinema. Rather than insisting, as in many contemporary debates (or complaints), on the formal separation of the viewing conditions of gallery and cinema, Bruno’s “architexture” shows that travelling through views is common to them both. Her use of Eisenstein’s essay Montage and Architecture in chapter two is provocative in this regard, as it undermines the simplistic distinction between immobility and mobility that characterises much fruitless discussion about the art gallery viewer’s advantage over the immobile spectator in the movie theatre. As Bruno says:

There is a mobile dynamics involved in the act of viewing films, even if the spectator is seemingly static. The (im)mobile spectator moves across an imaginary path, traversing multiple sites and times. Her fictional navigation connects distant moments and far-apart places (55–56).

This is a refreshing view that overrides the physical peripateia that celebrations of gallery spectatorship seem to be based on.

One of Bruno’s models for this view is Italian vedutismo. Vedutismo was a particular incarnation of the observational gaze, where the codes of landscape painting in the late 17th century were transferred to the urban terrain. What this meant was that city panoramas, e.g. in the paintings of Canaletto (1697–1768), emphasised the successive juxtaposition of a number of aggregate views. Bruno reads vedutismo as a pre-cinematic way of organising narrative space. One of her most interesting observations is how this “bird’s-eye” view was constructed from a number of disparate views from different high points throughout the city, rather than one all-embracing view. If a history of cinema is to be drawn from earlier codes of representation, then it seems crucial to reframe the misguided notion of the cinematic apparatus as a machine that presents the world as a totalising spectacle. Following Crary and other researchers in art history, Bruno compellingly argues against the usual view of film space as the homogenous space of classical unified central perspective. She shows how the moving image, from its very inception in the various traveling “architextures” that she describes, was always a heterogeneous space comprised of constantly moving centers. The embodiment of space delineated by Jan Vredeman de Vries (1527–c.1604) in his book on perspective gives credence to Bruno’s argument that film, rather than being conceived as the direct heir of classic Renaissance perspective, can be seen in relation to traditions that incorporate a mobile body into perspectivism. Taking an historical approach to the notion of film space as tactile, Bruno adds to the theoretical work on film space and embodiment in current film studies by Vivian Sobchack and Laura U. Marks.

Bruno also puts gender more firmly on the (tactile) map. Among the other models that inspire and are woven into the texture of Atlas of Emotion are the Cartre du pays de Tendre – a map designed by the salon hostess, Madeleine de Scudery, to accompany her novel Clelie (1654) – and the journey of Katherine (Ingrid Bergman) in Roberto Rossellini’s Voyage in Italy (1953). Both of these female voyagers reappear at irregular points in Bruno’s narrative, Scudery’s map being focused on in chapter seven in relation to gender and geography, Voyage in Italy finally surfacing fully in chapter 11. Scudery’s map graphically embodies the central tenet of Bruno’s argument – that motion produces emotion and that emotion contains a movement, a phrase that Bruno twists and twirls every which way. Moving through Scudery’s topology, one runs the gamut of the emotions. For Bruno, traveling is a kind of “emoving”.

There is nothing wrong with this as far as it goes. In fact, emphasis on the emotional affect of film is part of the current reassessment of early film theory in contemporary film studies, as in Leo Charney’s Empty Moments: Cinema, Modernity and Drift as well as Rachel O. Moore’s Savage Theory: Cinema as Modern Magic. This emphasis is also part of the attraction Gilles Deleuze’s work holds for writers such as Marks and Jodi Brooks – the emotional impact of film having been discounted by semiotic and psychoanalytic film theory. However, what makes Bruno’s thesis rather annoying is that she never defines what exactly she means by emotion. She is not referring to the reductive emphasis on the cognitive recognition of emotions in post-theory nor does she mean emotions in a psychoanalytic sense. Yet in a fleeting reference to psychoanalyst Paul Schilder she quotes him as saying ” ‘space…is in close relation to instincts, drives, emotions and actions”, following this with a hasty “Viewed from this perspective, the interaction of psychoanalysis and space can be seen to reside in the very production of lived space” (257). “Really, and how so?” I found myself asking. This was one of the many points in the journey where I balked at the slippage between difficult concepts – concepts that demand attention and should require pause for reflection on Bruno’s map. Quoting Schilder is indeed appropriate, but a little unpacking of his account of space and the body in relation to the image, while it would not refute Bruno’s central thesis that movement generates emotion, might have inserted a much needed gap into Bruno’s method of absorbing everything in her path. A case in point is her reading of Alain Resnais and Marguerite Duras’ Hiroshima mon amour (1959), where what I would claim is the film’s asymmetrical mapping of the two cities and the two lovers in the film, the then and the now, in Bruno’s reading becomes “One body, one city…only one site” (242). It is difficult to see how this blurring of distinction can contribute to a “spacing effect”, as she claims. In Bruno’s trajectory emotion would seem to equal motion which simplifies matters greatly.

Another reason I found myself frustrated by Bruno’s mapping was her refusal to make distinctions between varieties of female voyagers. Bruno’s gender politics in Atlas of Emotion initiates a crucial discussion of the necessity of undermining the binary opposition between home and travel which underpins classical narrative and keeps woman in her place. As Bruno rightly points out, making particular reference to Dorothy Arzner’s Craig’s Wife (1936), the home is equally a site of voyage. Although in that film the female protagonist is ultimately imprisoned by her journey through the home, Bruno maintains that the home is punctuated by mobility rather than remaining as a dead space to be returned to after the narrative of voyaging is over. I agree with the ethos of this reframing, but then Bruno goes on to celebrate the female voyagers in the films of Michelangelo Antonioni and Chantal Akerman in the same light. Surely the stakes are completely different in these filmmakers’ use of female voyaging? In Antonioni the camera looks at Monica Vitti looking at the landscape, her image a sign of melancholy absence. By contrast, Akerman’s wanderers have a different relation to the loss of the homeland, one more akin to Bruno’s argument about the home as a site of passage. I wanted Bruno to make some distinctions between these approaches to female wandering rather than celebrate them all as instances of the one phenomenon. And rather than this being a purely idiosyncratic desire on my part, I would say that Bruno’s argument for “a critical shift from a spectator-voyeur to a spectatrix-voyageuse” requires such distinctions.

Given that Bruno is concentrating on a surface mapping where exterior and interior collapse on the terrain of a singular topology, it is perhaps unfair of me to criticise her for a lack of in-depth analysis. However, the haptic surface where things come into contact does simultaneously produce a depth dynamic, to which Bruno’s more personalised, almost confessional, writing in the prologue and chapter 12 testifies. The spectatrix-voyageuse of Atlas of Emotion is ultimately Bruno herself as she charts her own trajectory through illness in the prologue, and her return to Naples for her father’s funeral in the final chapter. While I found the account of Bruno’s cancer in the prologue deeply moving, I wondered about its appropriateness given that it seemed like an isolated, confessional detail. By contrast, Bruno’s fictional writing in the final chapter “My ‘Voyage in Italy'” was well woven into the fabric of the book. The mixing of fictional accounts of the female protagonists in Rossellini’s Voyage in Italy and Mario Martone’s L’amore molesto/Wounded Love (1995) with Bruno’s own journey to Naples didn’t seem at all self-indulgent, the scene for this inventiveness having been set by the experimental analysis of Voyage in Italy in the preceding chapter.

Bruno’s analysis of Katherine’s journey in Voyage in Italy picks up on the themes of female voyaging that pervade Atlas of Emotion – from the pioneer traveler and lecturer Esther Lyons who fashioned herself by travel and clothes, to Chantal Akerman’s cinematic nomadism. In some stunningly written passages, Bruno shows how Katherine is soon derailed from the well-known script of the personal picturesque voyage, as bodily memories surface and begin to interact with the sites she is seeing. “[T]raveling to Italy on a voyage of self-recollection, a woman can reanimate her map”, concludes Bruno. I was completely seduced by this chapter, which introduced each section documenting the film and the history of the grand tour with quotations from authors ranging from Djuna Barnes to Henri Lefebvre on their respective encounters with Italy. It is not often that one is convinced by the value of personalised writing on film, but Bruno has achieved a finely-tuned balance between the personal, the historical, and the literary in the final chapters of Atlas of Emotion: Journeys in Art, Architecture, and Film. Bruno’s methodology itself seems like one of the the “field screens” of moving images that she plots out between the map, the wall, and the film screen, field screens whose motions “emove” us despite the fixity of their supports.

It is here that the rationale of Bruno’s argument may be glimpsed – what it offers to contemporary cultural theory as well as film and art theory. What connects the museum, the gallery, the movie theatre and its phantasmagoric precursors is that they are memory sites which affect us, rather than being sites of an alienating spectacle that divorces us from the real. For the female voyager, Plato’s cave of moving images does not hide the truth, but reveals the world as a site of self-fashioning.