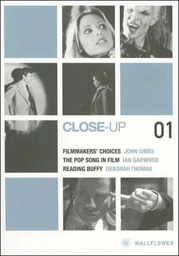 Close-Up is a stimulating new idea from Wallflower Press who, through their varied, audacious and prolific line-up of titles, have rapidly become one of the leading publishers of film literature. Slated to be the first of an annual series, Close-Up #1 draws its inspiration from an article by V. F. Perkins, “Moments of Choice” (1), which is “rooted in the reflection of the significance of detailed decision-making” in film (p. 5). The commitment made by the writers and editors of this venture to pursue a “bottom-up” model of film and television analysis that “question[s] and re-shape[s] concept and theory” (p. vii) participates in the renaissance of close analysis that is clearly evident in the range of film titles currently appearing in bookshops. Not least amongst these is Gibbs and Pye’s own recent anthology for Manchester University Press, Style and Meaning: Studies in the Detailed Analysis of Film (2005), to which this latest project might be seen as a companion piece.

This volume is essentially an omnibus of three 80-page monographs, any of which might have been equally at home in Wallflower’s “Short Cuts” series of study guides. Each contribution is founded on close analysis. Each finds internal coherence in its dedication to unpicking the choices made in the construction of a unified group of texts or in the application of a particular filmic device, or else in the illumination and defence of the benefits of the close-analysis methodology at large. Each study, in this and in successive volumes, argue the editors, exhibits “a strong sense of the particular, the choices that make films distinctive and on which arguments for significance and value must rest” (p. vii). The approaches taken by the contributors therefore share a great deal of common ground, even while their analytical methods are tailored to expose the specific meanings that emerge from the employment of various techniques.

Co-editor John Gibbs opens the volume with his study, “Filmmaker’s Choices”, a title that would have stood as equally appropriate for the volume at large. Here he examines a series of different decision-making areas, ranging from shot-scale and length to the inflection of generic conventions. Each chapter focuses on how a specific type of choice is deployed in either a single film or a pair of comparable works. The second study, “The Pop Song in Film” by Ian Garwood, explores the various relationships that exist between pop songs and the narratives that they accompany, contribute to and/or comment upon. The volume is rounded off with a disquisition by Deborah Thomas on the contribution made by aspects of mise en scène to the formulation and communication of the principal themes of the television series, Buffy the Vampire Slayer (1997-2003): “Reading Buffy”.

The approaches taken by Gibbs and Garwood have more in common with one another than either has with Thomas’ study. This is not, as one might think, because the first two essays deal with film whilst the third is centred on television. Indeed, Thomas boldly argues that “Buffy The Vampire Slayer is television aspiring to the condition of film” (p. 173), especially in the degree to which “aspects of the mise en scène are laden with meaning. In other words, the narrative world on our screens is visually weighted, not just presenting us with a world but with a rich and extended semantic text” (p. 174). (The centrality of this thesis to her analysis might be seen to reflect Thomas’ own academic specialisation as much as it responds to Buffy, so that where she compares the series with other texts, she invariably references not television but cinema – The Stepford Wives [Brian Forbes, 1975]; Dark Victory [Edmund Goulding, 1939]; A Matter of Life and Death [Michael Powell and Emeric Pressburger, 1946].) The difference lies rather in the fact that Thomas’ is the only study that draws upon interview material (with series creator Joss Whedon and other crew members) as evidence of the programme-makers’ intentions.

Eschewing such reference to the discourses surrounding the texts under analysis, Gibbs and Garwood both centre their arguments for the reasoned intentionality behind the deployment of particular techniques by comparing texts with one another. Gibbs does this in various ways, comparing film with script (Unforgiven [Clint Eastwood, 1992]), film with original novel (Candyman [Bernard Rose, 1992]) and pairs of films derived from the same source material (The Deep End [Scott McGehee and David Siegel, 2001] is compared with The Reckless Moment [Max Ophüls, 1949], and Lured [Douglas Sirk, 1947] with Pièges [Robert Siodmak, 1939]). Although it is never explicitly stated, adaptation can therefore be seen as a theme running through “Filmmakers’ Choices”. Garwood similarly references competing versions of the same story and/or song in order to show how the selection of different routes from a comparable starting point can lead to utterly dissimilar results. In one chapter, he shows how the audio and visual choices made in positioning a particular song – Portishead’s “Glory Box” – within two films (Stealing Beauty [Bernardo Bertolucci, 1996] and Chacun cherche son chat/When the Cat’s Away [Cédric Klapisch, 1996]) allow it to service their themes and narratives in very different ways. Elsewhere, he compares Pal Joey (George Sidney, 1957) with the original stage production, Young at Heart (Gordon Douglas, 1954) with the non-musical film that it remakes (Four Daughters [Michael Curtiz, 1938]) and – at some length – Frank Sinatra’s delivery of the song “One for My Baby” in this film with his renditions of it on other studio albums.

The juxtaposition of these three studies within one volume offers an engrossing variety of specific subjects which complement one another admirably. Gibbs’ interrogation of “what Stanley Cavell has called ‘the critical question – “Why is this as it is?”’” (p. 5) proves extremely enlightening as to the functioning of particular film texts. If the brevity of the editors’ introduction to the volume along with the absence of any conclusion to this section make Gibbs’ contribution read more like an issue of Movie than an entirely unified work, the rigour and originality of his analyses leave me keen to revisit some of the films he writes so revealingly about. Garwood, as well as shedding light on the ways in which songs participate in the construction of privileged readings of specific films, abstracts from his findings “a number of key concepts for considering the choices filmmakers can exercise in terms of the relationship a song will have to its narrative context” (p. 103). In particular, he isolates “(i) the pop song’s quality of obtrusiveness; (ii) the cultural connotations associated with a particular song or type of pop music…; and, in all but the special case of the on-screen performance in the musical, (iii) a quality of potential ‘distance’ from narrative events” (p. 103). Thomas, through her meticulous observations and readings of “details of script, performance, costume, set decoration, lighting, camerawork, editing strategies, visual imagery and motifs and thematic structures” (p. 214) immeasurably enriches the experience of watching Buffy, even for a viewer such as myself who has already engaged in repeated viewings of the series.

As the editors note in their introduction, despite the resurgence in close textual analysis that has taken place in recent years, “‘top-down’ ways of thinking, in which the general framework takes precedence over the particular text, still pervade the literature and much teaching about film” (p. vii), a bias which they clearly hope their endeavours here will help to rebalance and perhaps reshape. Certainly the achievements of each contributing author impart significant weight to Close-Up’s thesis that “bottom-up” methods of analysis can help us to reach a deeper understanding of the processes by which meanings are constructed in film and television. If subsequent volumes – which I, for one, await keenly – are able to match the quality of the series’ inaugural volume, then it will undoubtedly represent the birth of an intelligent and highly valuable new publishing strand.