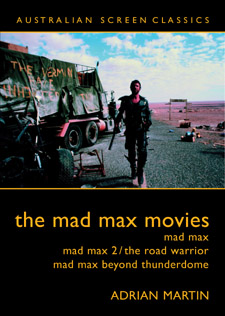 Currency Press and ScreenSound are to be commended for publishing the Australian Screen Classics series, which thus far includes The Devil’s Playground and Walkabout, along with The Mad Max Movies. This series of petite books will inevitably be compared with the British Film Institute’s “Classics” and “Modern Classics” series. The BFI series is international in scope in that it covers films and includes authors from outside Britain. The Australian Screen Classics series focuses on a single title or, in the case of Mad Max, a trio of related films, themselves contributing to Australian film culture and to a sense of Australian national identity.

In Adrian Martin’s capable hands, this study of the Mad Max movies encompasses George Miller-the-auteur as well as the movies themselves in relation to national culture. Martin has accomplished in this slim volume precisely what a contribution to such a series promises: a better understanding of the films, where they came from, and what their future significance might be. Spurred on by the imminent arrival of a fourth instalment to the series, Martin has undertaken not only to show how the films came about but also to speculate on re-readings possible once the fourth film appears.

Although the series might be inwardly focused, Martin has written for an overseas audience as much as for a domestic one, in that his manner of contextualising these films includes general information about Australian culture that non-Australians might not be expected to know in addition to a discussion of the Mad Max films’ significance that ranks their international contribution as highly as their domestic impact. It isn’t that Martin denies or ignores the domestic significance of these films; rather he argues that Miller has restricted his interest in producing visual narratives for nationalistic purposes to television while his film efforts have been pitched to an international market. Martin writes, on the one hand, that, in the 1970s, “Australia’s quality film product, fixed on the past, was for Miller ‘not the kind of film I’d be capable of making myself’” (p. 63) and, on the other, “The picture of an Australian cinema and TV involved in a project of historical recovery – a project to which Miller ambivalently feels at once close and distant – informs his documentary for the British Film Institute, 40,000 Years of Dreaming: A Century of Australian Cinema” (p. 64).

Given Martin’s focus on the three Mad Max films, it is reasonable to accept that there is only a filmography for these three films, and an admirably detailed one at that. However, Martin has written an auteur study as much as a handbook for three specific films. One of the excellent characteristics of Martin’s study is its way of situating the Mad Max films in Miller’s career, considering correlations between available budgets, personal growth, participation in and knowledge of international art trends and the development of the films’ visual and narrative style. It would therefore be useful to have a more complete filmography of Miller’s work, even if details were kept to a minimum.

Noting distinctions among the three films, Martin suggests that these differences result from the time when they were made – that is, where they occur in Miller’s own career. In the process, Martin sheds light on Miller himself as a significant filmmaker. Martin is explicit about his opinion of the three films, although he acknowledges that his opinion has changed over time. While he maintains that Mad Max 2‘s status as an Australian classic for both local and international audiences cannot be disputed, he now thinks more highly of the original Mad Max (p. 6). One can hardly blame him for virtually ignoring Mad Max Beyond Thunderdome, the third film in the franchise.

The reason for Martin’s higher opinion of Mad Max is its embodiment of an aesthetic based on “that supremely cinematic attribute, action” (p. 6). Martin’s research has been thorough, at times almost to the point of drowning his own voice. Some extremely interesting points get made in the quotations drawn from analysts across the spectrum of critical approaches. Martin sets out to distinguish his analysis from these others by focusing on Miller’s adherence to an appreciation of cinema as moving picture. While he acknowledges Miller’s turn toward mythology under the influence of Joseph Campbell’s books, he nonetheless argues that Miller’s gift as a filmmaker, as it appears in these three films, is embodied in the way Miller shoots, cuts, and compounds image and sound to create “bravura set pieces” (p. 12).

Miller is so good at what he does that Martin does not shrink from comparing him with Akira Kurosawa (p. 12), Fritz Lang, Orson Welles, Alfred Hitchcock, Robert Aldrich (pp. 26 – 27), and even Andrei Tarkovsky (p. 67). That’s a pretty wide range for comparison, and it suggests both the scope of, and a small weakness in, Martin’s presentation. As Martin repeatedly acknowledges, these films are brilliant in fits and starts, and his discussion of them suffers from a similar problem. Full of insightful moments, as when Martin shows the connection between Mad Max 2 and Jane Campion’s Peel (1982) – they are both Australian films in which “vehicles are…microcosms of social space that allow evolving relationships, power plays, and decisive gestures of interpersonal allegiance” (p. 38) – the Mad Max Movies nonetheless reads as a bit less than coherent throughout.

Still, Martin provides a good analysis of settings in relation to themes, for example, heroism in relation to isolation (pp. 15 – 16), a good discussion of characters relative to narrative development across all three films (pp. 50 – 51), and considerations of sound and costume throughout the volume. One of the book’s strengths is its effort at contextualisation; one of its surprises is how little it works toward arguing the importance of the Mad Max movies in relation to Australian national identity.

Heavily illustrated and nicely presented, The Mad Max Movies will undoubtedly take its place on the shelves of Australian film scholarship. Given Australia’s increasing importance for international film production, that may well mean that Adrian Martin’s discussion of these three films will get the full audience it deserves.