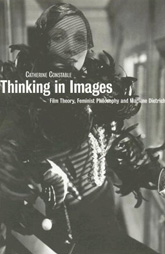 Shameless. That’s the word that comes to mind when I think of women like Marlene Dietrich – clever, strong, and defiantly erotic in the face of the hypocritical, hierarchical patriarchy that twentieth-century cultures, in all of their specific configurations, continue to maintain. Shameless is also the way that one needs to think the construction of women within this ecology – the question remains: how to be smart, compelling, and insolently affective in the face of the endless consumption of woman-as-object? Who else could pull off shaking their hairy booty in an outsized gorilla suit and then go on to stage a successful seduction, other than the unabashed Dietrich in Blonde Venus (Josef von Sternberg, 1932)? Dietrich embodies the appalling history of the aesthetics of taste in western culture, built and maintained with the consumption of alterity. She acts it out, and then – with her snapshot of the social implications of that perpetual othering of woman – dismisses that socio-straitjacket with her physical gestures; her affective resonance lingering long after her raised eyebrow of insolence was drawn. Catherine Constable’s book sets out to explore the theorising of the process of the rhetorical effects of “women”, utilising the iconographic figure of Dietrich as the woman. This is a book that compellingly engages a comparative methodology that both film historians and film theorists would do well to consider. Constable astutely situates her enquiry in the aesthetic of those existing shameless structures of the thinking of images of women.

Feminist and gender theorists have long been at pains to highlight the inaccuracy of the majority of western philosophical inquiries into images and the imaginary – a term with a long etymological and philosophical history, which invokes concepts of perception and the imagination of something. Twentieth-century theoretical utilisation of both analytic and continental philosophies of the image and the imaginary carry with them the misogynist baggage of simplistic pronouncements by the oeuvre of philosophers – including Plato, Georg Hegel, Sigmund Freud, Edmund Husserl, and Jean-Paul Sartre (to name but a few) – on the unfit state of women’s brains for engaging with anything but domestic or sexual activities. Constable’s book, as its title highlights, makes it plain that an image is not simply a fulfilment of its signification, as many of those aforementioned boys would have us believe. The strength of Constable’s book is the primary conceptual tools she posits for approaching film analysis, taken from three feminist philosophers: Michèle Le Doeuff, Luce Irigaray, and Sarah Kofman. Film theorists can certainly take inspiration from these philosophers, whose conceptual approach to issues concerning gender and representations of gender offers cautionary navigation tools through essentialist identity politics, written with original and personable prose. For film historians, Constable firmly guides the reader through some genuinely innovative ideas, grounding her philosophical concepts through close scene analysis, and attention to technical detail. One of Constable’s strengths lies in her ability to take the reader into the screen-scene, looking to such details as facial expressions, the cut and flow of a costume, lighting detail, camera movements, and editing shot rhythms, lengths, framing, and timing. With some nice frame stills from the classic Dietrich pictures, Constable’s prose draws in the reader to the visualisation of the actor’s gestures and attitudes: “Her short, rapid breaths and eye movement suggest a state of frozen panic” (p. 73).

In addition to the big three feminist names, Constable draws on multiple theorists for her argument, including key twentieth-century thinkers Jacques Derrida and Jean Baudrillard, and mediates their thought through some of the epistemological questions posed by these philosophers in response to Friedrich Nietzsche. “Truths are illusions which we have forgotten are illusions”, Constable cites from Nietzsche (1), as both a warning and a signpost for a chapter titled “Mapping the Roads Not Taken” – a chapter that carefully examines some rich material on the processes of thinking with, and in response to, images of women. This section – one among many strong chapters in the book – unleashes a spectrum of methodological possibilities for feminist thinkers of the future. Like her first chapter, “Theories Proper and Improper”, where she provides an excellent overview of the types of strangleholds that “purist” forms of formalist, cognitivist, and psychoanalytic film theory have had on the discipline of screen studies, Constable is able to clearly articulate the politics of the aesthetic judgments that have been imposed upon film theory, feminist and otherwise. In this endeavour, her book can be read alongside other recent publications that seek to situate the aesthetic of images in terms of their political imperatives, such as Jacques Rancière’s The Politics of Aesthetics (2000), Davide Panagia’s The Poetics of Political Thinking (2006), and Patricia Clough’s Autoaffection: Unconscious Thought in the Age of Teletechnology (2000). Like Constable’s Thinking in Images, these authors seek to critically examine the epistemological engagement of systems of the visual for political ends, done so through aesthetic veils. Bring on the gorilla suits.

Constable’s central thesis is taken from French philosopher Michèle Le Doeuff, particularly Le Doeuff’s bitingly ironic examination of the less than critical legacy of the metaphorical use of gender-biased, symbolically-parsed imagery by the legion of philosophy boys, in her book The Philosophical Imaginary (1980). Here Le Doeuff ingeniously examined the speculative domain of the philosophical “thinking in images”, drawing up a map of the conjunctions to be found between the “icon of the feminine” and the “common phallocratic prejudices” in a plethora of philosophical pronouncements around the symbolic material of imagery (2). Philosophy purists be warned: Constable takes Le Doeuff only as a starting point for her own trajectory of thinking in images, and she does not follow the course set by the judicious philosophical inquiry of Le Doeuff, who cautions against using the hierarchical positions of either dominant scholarly or popular cultural forms. These can only serve as providers of general descriptions that Le Doeuff views as themselves ethnocentric forms of “othering” (3). Being anything but a purist, I enjoyed Constable’s engagement with Le Doeuff’s concept of the imaginary as an original consideration of how to approach the paradigmatic construction of women such as Dietrich, whom film theorists have cleverly described but not critically engaged with in the mediation of their own cleverness. For example, as James Naremore writes of Dietrich, “she inhabits a realm where visible artifice becomes the sign of authenticity” (4). While I concur with this statement, I find it does not open any further trajectory of thinking through exactly what Dietrich manages to do to her filmic texts. Constable takes us one slight step further than Naremore’s semiotic, asking us to consider “ways of rethinking female desire in philosophy” (p. 134), and providing the reader with a plethora of examples. For instance, in a critique of Gaylyn Studlar’s thesis on the masochistic aesthetic, Constable looks at Dietrich’s performance as Catherine the Great in The Scarlet Empress (von Sternberg, 1934). Constable notes that “Catherine goes on to present herself as spectacle in order to gain political power. Rather than operating as the spectacular object of someone else’s show, she is now in control of staging herself” (p. 74). Rather than follow Studlar down the path of Gilles Deleuze’s Artaudean interest in the ritualistic suspension of desire in Leopold von Sacher-Masoch’s writing, Constable employs Irigaray’s provocative question to test her woman: “but what if the ‘object’ started to speak?” (5) Earlier comparison of how Irigaray’s critique enables the creation of “spaces for subversion within philosophy” in contradistinction to Bill Nichols’ “emphasis on the materiality of theory” (p. 25), which ultimately Constable sees as not offering any real pathways for conceptualising the visual, allows Constable to challenge the rhetoric of much of the canonical film theorists.

This book is forthright in its intentions, with Constable firmly insisting from the outset that theory is not only born of its vernacular sociality, but further, the processes of the everyday that theory takes up, matures, massages, abstracts, and delimits must be situated in its specific socio-political landscape, rather than hiding behind a pseudo-scientific “apolitical objectivity” that can be seen in the work of theorists such as Noël Carroll and David Bordwell (pp. 8-9). Constable endeavours to produce a text that would provide a rigorous positioning of the subject of woman in relation to a predominantly hostile cognitive film theoretical background that has largely turned a blind eye to the continuing inequities between gender roles in society, culture, and politics, at all levels, and in every corner of the globe. As Irigaray observed, “the feminine occurs only within models and laws devised by male subjects” (6). Although Irigaray, Le Doeuff, and Kofman offer quite distinct models of feminist critique, Constable’s text negotiates her position through these theorists’ respective methods in a pursuit of the moving visual gender. Constable’s “woman”, as Dietrich, offers us a model of analysis of herself, much like Kofman’s course of analysis of propositions and models of thought – a lived work in progress, a subject that must stand outside of herself in order to see past the fetishised construction of gender as object, and instead articulate the embodied moments of being woman (7).

The strength of Constable’s book lies in her focused premise, that of an exploration of the possibility of constructing a truly feminist philosophy for screen analysis, one that might solve this “problem” of inadequate and, to date, poorly understood theoretical methodologies useful for screen analysis. We might observe that at the heart of this “crisis” (as Constable refers to it in her introduction) lies the inexperience of film theory per se, unable – or perhaps unwilling – to acknowledge that every articulation contains some form of theoretical and thus political position, whether attached to a recognised school of thought or not. Often Constable is at pains to tell us what analysis she will engage in, what theory she is drawing from, and then how she plans to apply it, and then carefully summarises sections reiterating what she has just done. While some may see this as over-determined, I find these signposts are at the service of all students and practitioners of film theory and film historians seeking to inject their thinking with some rich ideas and just how to go about engaging them. The humanities professions often complain about the marriage of theories born of one set of paradigms with another set, citing “incomprehensibility”. There will be those who critique this book for these reasons. However, I think it is time for the humanities disciplines to examine their own forms of ingrained traditionalism, which continue to facilitate archaic identity-politics and uphold outmoded categorisation. Instead, let us engage with the myriad ways of being in a visual culture. Let us try out new theories, and fail spectacularly if need be. Constable’s book modestly performs a much-needed resuscitation for film analysis. Read it, and then watch Dietrich’s films again and, what is more, try and follow through on some of the possibilities opened up by this book: to think those images of woman differently.