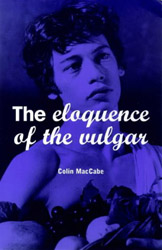 The Eloquence of the Vulgar, a collection of essays by Colin MacCabe recently published by the British Film Institute, quotes “in punning misconstruction” an unfinished work by Dante Alighieri, De vulgari eloquentia. (1) The phrase “On the eloquence of the vulgar” also serves as the title for the penultimate essay in the volume. As MacCabe explains, by composing his Divine Comedy in Italian rather than Latin, in a vulgar rather than sacred language, Dante wrote for the “volgari e non litterati” – those who were neither of the church nor the academy. (2) Writing in Italian, Dante discursively posits a new category of reader, his fellow citizens, whom he distinguishes from the masses. These new citizens he deems capable of forging a new social order, that order that we categorize as Humanism. For MacCabe, this movement, in which Dante reanimates the past through the figure of Virgil, his guide through the Inferno, translating him into the vernacular of the present, parallels the movement of the film scholar who must re-invent the study of culture for a new audience.

The double move, whereby MacCabe invokes the canon and popular culture in a single phrase, is an essential trait of this volume and its contribution to the study of film. These collected essays, originally published between 1983 and 1996, chart the convolutions of an unusual intellectual journey. The volume begins at the point at which the earlier Tracking the Signifier ends, 1981, the moment at which MacCabe leaves Cambridge to pursue a complicated career as a scholar and a film producer. (3) The essays are organized into four sections: “Theories and Practices”; “Readings: Cultural Forms and Social Change”; “Readings: Intellectuals in Transit”; “Institutional Initiatives.” The first section assembles four essays that treat the larger analytic categories of “author,” “writing,” “language,” and “culture.” The second section offers a set of three specific “readings,” of the history of Shakespearean performance, of television and of European cinema. The third section unites MacCabe’s introductions to publications by Frederic Jameson, James Snead and Gayatri Chakravorty Spivak. The final section includes three public lectures given by MacCabe that marked specific institutional developments: the British Film Institute’s MA program, the program in Cultural Studies at the University of Pittsburgh and a new Ph.D. program sponsored by the Architectural Association, Birkbeck College, the British Film Institute and the Tate Gallery.

This table of contents, which contains only one article on film per say, “A Post-national European Cinema: A consideration of Derek Jarman’s The Tempest and Edward II,” does not immediately suggest the usefulness of this volume, meta-critical in scope, to the cinema scholar, except perhaps anecdotally as work by the producer of such films as Distant Voices/Still Lives (Terence Davis, 1988), Caravaggio (Derek Jarman, 1986), Century of Cinema (Caroline Thomas, 1994) and most recently the video The Old Place (Jean-Luc Godard, A.-M. Miéville, 2000). In fact, this book should be required reading for all film and media studies scholars because it offers a touchstone by which we might evaluate the status of our field and understand its current weaknesses. Coupled with the earlier Tracking the Signifier, both books constitute a fragmented yet illuminating account of the genesis of film studies, and the vagaries to which it has been submitted over the last three decades. Film studies was initially introduced as part of a larger reform in curriculum influenced by the political sensibilities of 1968 and post-structuralism, a larger reform that MacCabe documents here in this volume. If film studies has been more or less accepted as a legitimate area of academic concern, the broader vision of which it was once part has not fared as well. As befits the spokesperson for this broader vision, MacCabe describes his interests as those, in his own words from Tracking the Signifier, of “a well-qualified jack of all trades.” (4) He begins in history and “traverses the fields of philosophy, English, film and linguistics.” (5) “Film” is the anomaly in this litany of disciplines. Film and television studies, as MacCabe continues to envision the area, is the lynchpin in what he terms the development of “emancipatory knowledge.” (6)

MacCabe’s incantatory invocation of Jean-Luc Godard and the culture of 1968 underlines the distance between film studies as it was and still is imagined by MacCabe and its current incarnation. MacCabe, as this volume makes clear, is a reformer in the tradition of F.R. Leavis and Raymond Williams – a tradition in which the reformer marks out the junctions and disjunctions of past and present as a constantly shifting cultural terrain. “Our cultural present is as valuable as our cultural past,” remarks MacCabe in his introduction. (7) It is MacCabe’s goal to invent a class of readers capable of negotiating past and present who would move us towards the new polis, re-writing the terms of citizenship. His discourse recalls the idealism of another era; it has the soft incandescence of youthful dreams that are no longer possibilities and that, nonetheless, still speak to us of our better selves.

In Tracking the Signifier, MacCabe characterized himself and his cohort as “the class of ’68,” and he still views with a certain fond nostalgia what he terms “the messianic utopianism” of that period. (8) This utopianism remains the governing conceit that animates his rhetoric. MacCabe consistently calls upon the figures and the tropes of the past, of “the class of ’68,” in order to envision a future for the Humanities in which film and television would occupy the privileged place once accorded literature. In so doing, he fails to address, even when he admits that programs in film and television have now become commonplace, the direction taken by these programs. In the new university with its distance learning, its computer literacy and its standardized evaluations of student and teacher, technical proficiency and the accumulation of data have replaced “analysis and examination” as the goals of education. Film and television studies programs in the United States increasingly conform to a model of competency necessary to the production of knowledge that might be called “tele-visual.” These programs have become academic versions of the new controversial game show, “The Weakest Link,” in which participants compete not only in offering the correct response but in achieving the highest rating among their adversaries. MacCabe remains faithful to another model of knowledge, perhaps unpragmatic, but one that recalls the culture of a more generous and altruistic time in which it was still possible to raise the issue of ethics. As another member of the class of ’68, Christopher Hitchens commented in Vanity Fair, looking backwards toward the era of his youth: “Man cannot live on Utopias alone. But as Oscar Wilde so shrewdly remarked a map of the world that does not include Utopia is not even worth glancing at. I once had a glimpse of that map in real time.” (9)

At the end of this volume, author and reader walk hand in hand. Paradise was lost and yet.”The World was all before them, where to choose/Their place of rest, and Providence their guide.” MacCabe’s utopian vision remains intact – but this is a sad and chastened utopia. It is not a coincidence that MacCabe commences the essay “On the eloquence of the vulgar,” by referring to another equally famous literary journey, likening himself to Dante at the beginning of The Inferno. Here, Dante finds himself in the middle of his life in a dark wood, without a clear path. “che la diritta via era smarrita.” (10) Significantly MacCabe translates this line as “with no direction home” and it is indeed to the past that he looks. Clearly, “home” lies somewhere among the messianic utopias of history for the class of ’68. Dante’s conclusion is a happy one – he looks forward to the future of another life. MacCabe offers neither himself nor his reader even a glimpse of heaven, a way out of the dark wood in which Western culture now finds itself. Unlike Dante and Virgil, MacCabe does not offer a path that returns us “nel chiaro mondo,” (11) a world in which “an emancipatory knowledge” sheds its light on a brighter future. As difficult as it may be to conceive of knowledge in these terms at this moment in history, we would be, nonetheless, unwise to ignore such a goal if we wish to think of ourselves as educators in the fullest sense. If nothing else, The Eloquence of the Vulgar reminds us of this task.