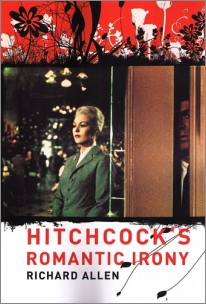 Richard Allen demonstrates his enduring fascination and respect for Hitchcock’s filmmaking within a compelling new authorial study. Hitchcock’s Romantic Irony examines the director’s overarching modes of narration and formal dexterity, and deftly incorporates an analysis of the entire spectrum of Hitchcock’s oeuvre. In his preface, Allen describes this effort as a “study in poetics” in which he articulates a process of “descriptive generalization” that unifies his analysis of Hitchcock’s work around the concepts of romantic irony and aestheticism (p. XII). Although the author explains at the outset that the concept of romantic irony is elusive and its usage often amorphous, he offers an adventurous intellectual inquiry into the formation and definition of the term as it applies to Hitchcock’s work, stressing its importance in the organisation of narrative meaning as the articulation of a double perspective in which its various and opposing forms serve to both define and unify the director’s diverse body of work. Allen situates his critical inquiry amongst a wealth of Hitchcock studies by academics and theorists (including his own previously published essays) which he draws on throughout the book while privileging his distinctive approach to this project. The influence of late Romanticism on Hitchcock’s work is explored in detail, as well as the particular ways in which Hitchcock utilises the forms of romantic irony within suspense and black humour to both affirm and subvert the Romantic ideal. Allen cogently relates this inquiry to the questions of aestheticism and style that emerge in the conception of romantic irony and in the articulation of suspense.

What animates this analysis is an approach to Hitchcock’s stylistic and narrative idioms that underscores the director’s distinctive viewpoint as one that is “neither moral nor immoral: it is the amoral point of view of the romantic-ironist or aesthete” (p. XIII). Allen’s discussion of a broad cross-section of films is organised around his observations about this aspect of Hitchcock’s approach, stressing the dialectic of romantic irony as the both/and logic that governs Hitchcock’s universe and unifies the entire body of his work. By the end, Allen carefully demonstrates how Hitchcock has reinvented the idiom of romantic irony by forging an adaptation of aestheticism, expressionism and surrealism within popular narrative conventions. Allen frames the director’s ubiquitous influence on twentieth-century cinema within the genres of romantic and detective thrillers, as well as the psychological horror film. Those of us fortunate enough to have studied with Professor Allen at NYU are familiar with the nuance and depth of his attention to this influence, as well as the merit of his conviction that Hitchcock is “quite simply the most important director in the history of cinema” (p. 258).

The book is divided into two separate but related parts that sequentially explore narrative form and visual style, so that Allen’s analytic strategies accumulate across these thematically organised chapters and lend unity to a wealth of observations. He presents a close reading of Hitchcock’s work, referencing over 30 films from his English and American periods, and provides salient examples and carefully rendered comparisons that illuminate the recurring motifs of the central thesis. The text is augmented with black-and-white photographs and colour plates that illustrate the tropes central to Hitchcock’s visual rhetoric of expressionism. The first chapter begins with a comprehensive discussion of the origins of romantic irony within the rhetorical logic of romantic philosophy central to the early nineteenth-century writings of Frederick Schlegel, and it describes romantic irony as the context for understanding Hitchcock’s narrative form. In addition, Allen offers an absorbing synthesis of the diverse influences on Hitchcock’s early creative life, found in the works of Sigmund Freud, Oscar Wilde and the German Expressionist filmmakers of the 1920s.

The analysis that follows offers a comprehensive deconstruction of three modes of romantic irony that shape Hitchcock’s narrative idioms, all sharing what Allen describes as “The logic that unites romantic love and human perversity or life and death in Hitchcock’s work in the both/and logic of romantic irony” (p. 12). Within such comic thrillers as North by Northwest (1959) and The 39 Steps (1935), the “anarchic force” of human sexuality serves to fuel romantic revival rather than to challenge it (p. 13). Conversely, within the second form of “ironic ambivalence” that defines a majority of Hitchcock’s films, ranging from his British period including The Lodger (1927) through his American period with Strangers on a Train (1951), the “lure of human perversity” serves simultaneously to both subvert and inspire sexual attraction (p. 13). The third mode of “ironic inversion” as it is realised within narratives such as Vertigo (1958) and Psycho (1960) replaces the romantic ideal altogether (p. 13), so that relationships are ultimately infected and undercut by darker forces within the human psyche.

Allen draws on his consummate familiarity with other critical texts about Hitchcock’s films while outlining the director’s stylistic and narrative characteristics. He expands, for example, on Leslie Brill’s concept of artifice and Robin Wood’s configuration of the “chaos world” to articulate a broad and compelling analysis of the tropes which signify the director’s strategies of humour, suspense and expressionist visual style. Allen delineates Hitchcock’s use of suspense as a form of black humour, which is often orchestrated to “subvert the coordinates of conventional morality” (p. XV), and illustrates the ways in which Hitchcock exploits suspense as a subjective factor to manipulate the dynamics of point-of-view and foster “sympathy for the devil” (p. 53). He cites a fascinating example of the negative public reception to the film Sabotage (1936) to demonstrate how Hitchcock’s use of this “ironic edge of suspense” proved too great a violation here in its perceived sadism (p. 49). Allen deftly demonstrates Hitchcock’s use of tonal ambiguity and black comedy, epitomising the both/and logic of romantic irony by inviting relief and intensifying suspense, which the author explains “often drives a wedge between the emotions that the scene ought to solicit and the way in which we are actually invited to respond, in a way that leaves the spectator anxious or uneasy” (p. 18).

Allen’s investigation of sexuality and suspense offers perceptive and original insights in his analysis of the wrong-man/wronged-man motifs, specifying how problems of recognition and misrecognition structure Hitchcock’s plots, and how sexual difference informs the quest for knowledge and the consequences of that knowledge. While noting the distinctions drawn by Hitchcock between “male and female forms of knowledge and being” (p. 81), Allen presents a fresh take on the work of feminist writers such as Laura Mulvey and Tania Modleski through an interpretive approach that vividly renders the director’s realignment of traditional gendered epistemologies. Hitchcock’s “self-conscious revision” of masculinity, characteristic of his films of the ’40s and ’50s, is identified within a cross-section of protagonists who are subject to vulnerability and weakness, ranging from the alluring rogue to the sympathetic anti-hero to the “criminal dandy” (p. 83). The ambiguity of “queer” sexuality found in both male and female characters who are excluded from normative heterosexual relationships emerges from what Allen identifies as the “residue of Hitchcock’s English, Edwardian sensibility” (p. 107). In Hitchcock’s earlier English period, Allen cites examples of the dandy persona in the protagonist of The Lodger and Sir John (Herbert Marshall) in Murder! (1930), characters who create a template for a “sympathetic figure of deviance” in Hitchcock’s films and whose relationship to good and evil “exists outside of ordinary structures of social authority” (p. 107). In his later American period, the dandy often appears as a criminally perverse character, such as Uncle Charlie (Joseph Cotten) in Shadow of a Doubt (1943), both Brandon (John Dall) and Phillip (Farley Granger) in Rope (1948) and Bruno (Robert Walker) in Strangers on a Train. Allen articulates the complex ways in which Hitchcock informs the criminal dandy’s particular relationship to knowledge and power, exhibited here as unambiguously demonic in comparison to the “wrong man” protagonist, while simultaneously exhibiting traits of vulnerability and empathy lacking in the hero (p. 107).

In conceptualising aestheticism as Hitchcock’s stylistic mode of romantic irony, Allen defines an essential distinction between contrasting modes of masculine and feminine aesthetic in which his visual style registers as either “perverse sexual content” or “the idealization of an incipiently self-annihilating femininity” (p. 161). This is exemplified at times in the playful appropriation of male voyeurism, fetishisation or narcissistic illusion that suggest an aura of perversity and sado-masochism, and constitute the perverse sexual content that Allen contends is “the alibi upon which Hitchcock can construct his pure cinema” (p. 154). Hitchcock’s aestheticism is richly elaborated in Allen’s discussion of Vertigo’s stylistics, illustrating his claim that within the director’s work “human sexuality, deemed by definition perverse, is self-consciously displaced into style in the manner of a Freudian joke that at once disguises and reveals its sexual content” (p. XV).

The final chapters of the book delineate in compelling detail the significance of iconography, expressionism and the domain of colour in the director’s later works, which Allen argues is a gesture towards a “surrealist aesthetic” (p. 219). While stressing Hitchcock’s attention to visual expressionism as the articulation of the double or “shadow world” (p. XVI), Allen offers a comprehensive catalogue of the elements of graphic design and expressionist imagery, demonstrating the author’s visceral engagement with his material. In a series of 48 black-and-white plates, Allen deftly illustrates the visual patterns and strategies which convey Hitchcock’s genius in his use of visual rhetoric and its relationship to larger narrative patterns. Archetypal images specific to Hitchcock’s expressionist iconography – including banisters, staircases, and black-and-white parallel line designs – are cleverly contrasted in stills from a number of films across various periods and genres, including The Birds (1963), Vertigo, Strangers on a Train and Rear Window (1954). In this analysis, the author offers a keen appreciation for the stylistic unity evident in Hitchcock’s later work in an illuminating discussion about the director’s unique attention to the idiom of colour. Allen asserts that the director’s enthusiastic and experimental approach to colour design respects the “constraints of realism” while it is always motivated by character and the narrative world, citing pre-Raphaelite influences to demonstrate that “the rhetoric of color allowed Hitchcock to articulate the doubled world of appearances – that is, the way in which the chaos world supervenes upon the world of the ordinary” (p. 219). From the director’s collaboration with Salvador Dalí in Spellbound (1945) to the articulation of colour surrealism in films such as Rear Window and Vertigo and the inverted use of black and white in the colour design of Marnie (1964), Allen demonstrates, in considerable detail, the ways in which the formalist visual style in Hitchcock’s colour films expands the visual vocabulary and narrative expressiveness of the work and enhances our understanding of story and character.

Allen’s careful attention to narrative formations and suspense, along with his meticulous rendering of Hitchcock’s visual aesthetic as the stylistic mode of romantic irony, constitute an accessible and engaging analysis of Hitchcock’s work and sets this effort apart from other scholarly studies. Allen’s achievement here directly underscores his ambition for this book, expanding on more contextual approaches in contemporary studies which are limited to the history of film style to encompass a broader analysis of the director’s aesthetic form as it emerged from the legacy of romanticism. This study is particularly invigorated by the author’s compelling perspective on Hitchcock’s visual aesthetic and its relationship to the complexities of human sexuality, which offers an original alternative to the proliferation of psychoanalytic readings that Hitchcock’s work has inspired. Allen’s poetics-driven interpretation of the director’s adaptation of the idiom of romantic irony makes a notable contribution to Hitchcock scholarship, inviting us to revisit the director’s oeuvre with fresh eyes and renewed curiosity.