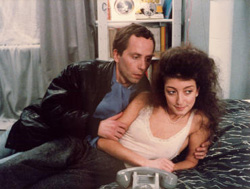 It may be said that Eric Rohmer’s relation to cinema is as Nicolas Poussin’s was to painting: at once highly classical, yet also progressive and radical. Bernini, pointing to his forehead, referred to Poussin as “a painter who works up here”. Similar arguments can be made about Rohmer.

A casual first glance at one of Rohmer’s films may invoke the well-noted reaction of Gene Hackman’s character from Arthur Penn’s Night Moves (1975): “I saw a Rohmer film once; it was kind of like watching paint dry.” But engage with his films and there are wonders to be discovered. This is not to say Rohmer and his films are something one has to “work at”. Rather, his films unfold at the pace of life, defying cinematic convention in the French New Wave tradition. Rohmer explains his preference for character driven and centered cinema over plot-centric or issue cinema this way:

The people in my films are not expressing abstract ideas – there is no “ideology” in them, or very little – but revealing what they think about relationships between men and women, about friendship, love, desire, their conception of life, happiness…, boredom, work, leisure…. Things which have of course been spoken about previously in the cinema, but usually indirectly, in the context of a dramatic plot. (1)

In Rohmer’s Full Moon in Paris, often mistakenly considered a dark film, it is Louise (Pascale Ogier) who will reveal her feelings about the sexes and sex. She is a young interior designer shuttling between her boyfriend Remi (Tchéky Karyo) and his apartment in the suburbs and her second apartment, or pied-à-terre in Paris. The film opens with the warning of an old French saying, “He who has two women loses his soul. He who has two houses loses his mind.”

Remi, a rough, athletic man, wishes Louise to stay with him more and avoid her all night partying in Paris. Louise enjoys and feels she needs the city life. “Since I started work, I’ve quit going out. That’s what wears me out! I have no life of my own”, she says. “I need to stay up all night now and then.” On the weekends, Remi is usually out playing morning tennis when Louise arrives home.

Encouraging her decadent urban behavior is the caddish writer Octave in a brilliantly balanced comedic performance by Fabrice Luchini. He is married with a child and infuriated he cannot successfully seduce Louise. Defending his overtures to her, as he changes his shirt for the evening, he states, “People who’ve given up seduction are dead, worse than dead”. A charmingly ordinary-looking fellow, the look up and down he gives her before saying “worse than dead” is priceless. With his cultivated ironic romantic distance, he seems like an aesthete out of the works of Huysmans or Kierkegaard. He is the antithesis of Remi.

Having finished designing and moving into her Parisian apartment, Louise finds herself with nothing to do. She calls up a series of people and all are busy. She is alone, as she apparently wishes. As she has told Octave earlier, “The one experience I’ve missed is loneliness, and the pain it causes”. Octave dryly, but honestly responds, “Loneliness is no fun at all”. Rohmer’s camera follows Louise as she selects two books from her shelves, turns down her bed, and in an almost unconscious, poetic gesture, swipes it. She exits the screen, the camera staying on the bed as the sounds of Louise brushing her teeth are heard over a slow fade out.

Her life continues on with Octave on the one side, Remi on the other, and a young musician newly entering the scene, all presenting different lives, confusions and intrigues building. During the night of a full moon, Louise engages in her first “purely physical relationship”. She is left saddened and lost from it, drawn back to Remi. Her naked body retreating from her once-prized Parisian apartment provides a harrowing image. She has been emotionally stripped to the core.

The film ends with some surprises and a confrontation with Remi. With sympathy, he tells her, “One has to choose. It’s painful.” The last shot shows Louise leaving Remi, walking to the train station and returning to her Parisian apartment.

On the surface this may be considered a sad ending. Louise has endured something of a comeuppance. As Rohmer has described the conclusions of many of his films:

The character has made a mistake. He realizes he has created an illusion for himself. He had created a kind of world for himself, with himself at the center and it all seemed perfectly logical that he should be the ruler or the god of this world. Everything seemed very simple and all my characters are a bit obsessed with logic. They have a system and principles, and they build up a world that can be explained by this system. (2)

Throughout his films, characters lie to themselves almost more than to each other and this is, in part, what gives Rohmer’s films so much of their warm irony and comedy. Rohmer, as a Catholic, sees the revelation of truth to them as coming via grace, in Full Moon in Paris by the grace of suffering. Whether it be the Christmas snow fall in My Night at Maud’s (1969) or the light of the sun in Le Rayon vert (1986), Rohmer interjects into the lives of his characters occurrences of the natural world that are outside of their control. In this case it is a full moon which affects the main character, causing her suffering but also enabling a revelation. Louise has learned about choice and responsibility, and though for a time she may be saddened, is the better for it.

Rohmer’s cinema is about noticing, even in apparently bad or negative things, all the beauty in a world which he believes a gift from a loving, omnipresent, engaged God. The following quote from Alexander Pope’s “Essay on Man” provides a fitting epitaph for the film:

All nature is but art, unknown to thee;
All chance, direction, which thou canst not see;
All discord, harmony not understood;
All partial evil, universal good;
And spite of pride, in erring reason’s spite,
One truth is clear, Whatever is, is right.