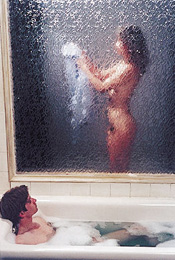 Tap-tap-tap. Preceded by the clicking of her high heels, a young woman (Sylvie Testud) walks through the Place Vendôme in Paris, the camera following her in one unbroken shot till she reaches her car. A young man (Stanislas Mehrar) follows her, gets into his own car and continues tailing her. In Marcel Proust’s A la recherche du temps perdu, the young woman was Albertine, and the man was Marcel. For La Captive, Chantal Akerman, adapting La Recherche‘s fifth volume, calls her Ariane. While much has been written about Proust’s driver/companion Albert, who might be hidden behind the oddly feminine name of Albert-ine, Ariane is a name without masculine equivalent; in Greek mythology she was the daughter of Minos and Pasiphae, who fell in love with Theseus and gave him a magic ball of twine to find his way in the labyrinth. (1) In ARiANE, one finds five letters of AkERmAN. From Proust to Albert to Albertine to finally Ariane and Akerman, there is a vertiginous interplay of sliding equivalencies, of masks that simultaneously frame, hide and reveal some secret. In the film, Ariane’s partner, lover, captor and tormentor is named Simon, preserving the narrator’s Jewishness as well as alluding to Albertine’s family name: Simonet.

In La Captive, updated to contemporary times (2), Simon lives a comfortable existence of homme de lettres in a large bourgeois apartment he shares with his grandmother and a housekeeper, Françoise (3), and in which he keeps a young woman of unclear social status. Plagued by allergies and asthma, Simon is unable to accompany Ariane when she goes out, but, suspecting her of loving women, spies on her and relentlessly questions her to find out if she’s ‘lying’ to him. What unsettles him, ultimately, is the enigma of femininity. What is a woman? and which mystery is hidden when two women are together? Proust explores the masculine side of the question, probably transposing his own anxieties – what hidden pleasures could his (male) lover find with a woman? Conversely, in most of her films, especially those with a (semi)-autobiographical resonance (Je tu il elle, Les Rendez-vous d’Anna, Portrait d’une jeune fille de la fin des années 60 à Bruxelles) (4), Akerman portrays women who desire both men and women, developing, however, a more intimate bond with the latter. For a female director, the challenge posed by an adaptation of the Proustian text is that Marcel is constructed as the subject of desire – who acts upon it, obsesses about it, suffers from it – and Albertine is its unfathomable object. While both Sylvie Testud’s outstanding performance and Akerman’s peerless direction give Ariane a complex subjectivity and agency, what she does off-screen and what she thinks remain a mystery. Is it because the effects of female authorship are not powerful enough to dispel the “active/passive heterosexual division of labour” uncovered at the core of film narrative by Laura Mulvey: “woman as image, man as the bearer of the look”? (5) Or is a more interesting (transgressive) structure at work here: a woman attempting to look at another woman who loves women through the eyes of a man who tortures himself by trying to understand female homosexuality from the inside? Threatened by the contiguity /continuity between two female bodies that the homosexual bond entails, the boundary between two individuals can nevertheless be restored by the introduction of a third term, intervening from the other side of the gender line.

Tap-tap-tap. Ariane climbs a staircase at the end of a cul-de-sac where she has parked her car, then disappears. Simon is now guided by the clicking of the invisible high heels – it is the only “ball of twine” that the despondent and jealous lover can grasp. It complicates the fort-da game (6) that Simon plays with Ariane, redoubling the original visual dilemma (now you see her, now she’s gone) into its aural version (now you hear her, now you don’t). At a first level, Simon experiences that keeping/seeing your loved object in a glass cage is both tantalizing and excruciatingly painful. In one of the most beautiful scenes of the film, Akerman turns the lay-out of a luxurious bathroom – a bathtub and a shower separated by a transparent panel – into a complex apparatus of torture, desire and estrangement. Ariane and Simon bathe together, but in different spaces. They talk to each other, but they can’t touch. (7)

However, when Simon eventually touches Ariane, he still can’t be sure that she is with him. Even in a love embrace, she is absent – or pretending to be asleep, as in another exquisite scene in which, after Eric Rohmer in La Marquise d’O, Akerman alludes to Henry Fuseli’s The Nightmare. (8) The ‘game’ that keeps Simon both interested and devastated is that he does not know if Ariane was anxiously waiting to be ravished, or if she is simply ignoring him. Is he her Prince Charming or a thief, a rapist, an incubus? And then – what about her own jouissance? She’s obviously experiencing something, why does she pretend she knows nothing about it? It may be worth mentioning here that it is precisely at this juncture that Lacan located the “enigma of femininity.” (9)

While the fort-da game staged by Akerman is alluring on a visual level, her masterfully orchestrated sound-track is the real torture chamber in which Simon is trapped. Silence and noise are equally oppressive. Not hearing Ariane may indicate that she’s behind him, barefoot, or she’s in bed, asleep. Yet, he hears something but instead of being her it’s another woman, wearing similar high heels (cosi fan tutte) (10), for there are hundreds, thousands of women in heels, in the maze of streets, hidden staircases, public parks, hotels, restaurants, theatres and back alleys of Paris. When Simon starts following Ariane, the tap-tap-tap is the sign, both alluring and reassuring, of the young woman’s presence. As the narration unfolds, Simon is increasingly confronted by the multiplicity of high heels – whose clicking becomes the vertiginous signifier of an overflowing femininity. Julia Kristeva reminds us that, for Proust, Albertine has no fixed identity, but always appears as a “plural” being, a “multi-headed goddess.”

A woman could not be individuated. A petal in a bunch of flowers, a seagull in a flock of birds, or a mere reflection, detail, indistinct and interchangeable feature. (A) woman/women is always in an undifferentiated plural; she goes in group or bevy…. (11)

One night, Simon is looking for Ariane, who has left earlier, wearing a white scarf. Every woman met in the shadows, attracting his attention through the clicking of her heels, seems to be wearing a similar scarf – offering herself to his gaze, or talking to him, or passing unnoticed behind him, or followed by him, half-surprised, half-frightened, in a dark staircase. Unable to fully possess the woman, Simon is reduced to grab pieces of femininity, through visual or aural signs that turn out to be lures. Since more than one woman can wear high heels or white scarves, there is no way to distinguish one from the other, and the protagonist is constantly mistaking the shadow for the prey.

A sign of multiple femininity, the clicking of the heels, however, awakens in the subject the dream of a unified signifier. To the young boy in bed, waiting for his mother’s goodnight kiss (a fundamental Proustian trope) the tap-tap-tap signified her arrival, and then her cruel departure. It is also a bridge between absence and presence. The woman may be unseen, but the sound of her footsteps reveals her proximity. She is not, however, motionless, but walking – either in your direction (you’re going to see her, embrace her soon) or away from you, or even passing you by. Here is the paradox. A woman who walks resists ultimate fetishization, for she is in constant motion; far from being ‘an object,’ Ariane keeps being propelled from place to place by her desire (meeting other women, and then going back to Simon, whom she loves too). Yet, in most of her films (Toute une Nuit and The Golden Eighties (12) come to mind), Akerman put on her female protagonist shoes whose high heels and pointed toes fit within the codes of male sexual fetishism. One of the many subversions offered by her cinema is a reformulation of this fetish within the economy of female sexuality. If a fetish signifies a lack, it may not necessarily be, as in the Freudian orthodoxy, the lack of a penis, but, more essentially, the lack of a presence. Desired women in Akerman’s films are often constructed as missing, inaccessible, lost. Signifying the ever-changing, ever-torturing distance between subject and object, the clicking of the heels is an important trope in the construction of La Captive‘s cinematic space.

It’s also a way of giving the man what he wants (the fetish) without giving anything at all (the knowledge, the woman). Simon will never know what Ariane wanted from him – and this is what kills him. But, strangely enough, he’ll live (as Proust noted, hypochondriacs rarely die of what they think ails them). It’s Ariane who pays the price of his non-knowledge through her death. Or maybe she’s not dead – she just returns to the sea, where she came from, where all myths and mysteries came from, where Venus was born.